Legend has it that upon being informed that the citizens of France had no bread to eat, Marie Antoinette, Queen-consort of Louis XVI of France, exclaimed “let them eat cake.” 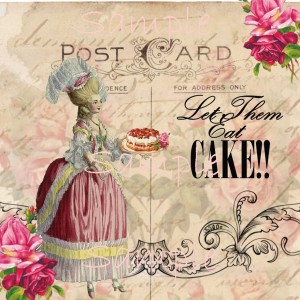 California Governor Jerry Brown recently had his own “let them eat cake” moment: At a press conference last week announcing the need for a 25 percent cut in water consumption, Brown said, “People should realize we are in a new era. The idea of your nice little green lawn getting watered every day, those days are past.”

Brown showed his “let them eat cake” character once again.

Jerry Brown enjoys an upper-crust Bay Area lifestyle, and is dependent on the very water projects he loathes and has shut down. Brown was the original push behind canceling crucial water infrastructure projects in the 1970’s and 1980’s, and has been supportive of diverting desperately needed reservoir water for fish, rather than food production in the Central Valley.

There is no doubt California is in a drought; we’ve been in one for several years. And California has had many droughts in its history, including when Brown was governor in the 1970’s. Yet it was only last week that Jerry Brown signed an executive order mandating the first-ever water restrictions in our state.

It’s obvious Jerry doesn’t live the way the California taxpayer peasants live. It’s been years since our “nice little green lawns” were watered every day. In Sacramento – the “River City” — we’ve been on landscape water restrictions for many years, despite living on two rivers.

Brown’s flippant comment is interesting. He’s a product of privilege, as the son of former California Gov. Pat Brown, who amassed wealth following his time in government. Political columnist Dan Walters revealed the source of the Brown family wealth was ironically an oil exporting business, gifted to Pat Brown by Indonesian generals who had just overthrown the country’s post-colonial dictator. They were grateful for his assistance in putting together millions of dollars in bank loans to expand the Royal Dutch Shell petroleum holdings in Indonesia, and gifted Brown the California trading firm, and half-ownership in the Hong Kong office.

When the going gets tough, the tough look for Zen?

When the going got tough for Jerry Brown after losing a few elections, he fled to India, and Japan to find Zen Buddhists and inner peace. ”’I felt that practicing Zen could deepen my own understanding and insight into Christian experience,’ Mr. Brown said,” the New York Times wrote in 1987. 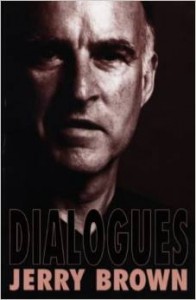 Most people find self-worth and Zen in hard work. Jerry never had to dream of purchasing a cute little home with a white picket fence, and little green lawn. Yet Brown is fond of telling voters of his frugality, having shunned the governor’s mansion in Sacramento in favor of a rented apartment during his first terms as governor. And the downtown loft Brown lived in while while Oakland mayor was not lacking in size or amenities.

In 2003, Brown sold his “cavernous, corrugated metal-clad loft on the market — for a cool $4.37 million,” — and moved in with longtime girlfriend, Gap executive Anne Gust, to an apartment one-tenth the size of his current digs in a decidedly less upscale neighborhood,” The San Francisco Chronicle reported in 2003.

The loft was a 17,500-square-foot live-work space. But “since he became mayor, Brown said ‘it’s more difficult to participate or even manage it.’”

“Brown bought the land in 1993 for about $600,000 and spent $1.3 million tearing down the existing warehouse, which proved too difficult to remodel, and building the new structure.” And he sold it for $4.37 million.

“The three-bedroom home comes with bamboo floors, a spiral staircase, breathtaking views of the bay and roll-up family room windows that let the sea breeze wash in. The office on the top floor has a private entrance. A spa level features a sauna and wetbar, while a dumbwaiter services every floor, making it easy to send a bottle from the wine cellar to the dining room.”

Frugality? Austerity? When? Brown certainly has embraced extravagant luxuries despite his carefully crafted image – and especially given that he’s been in government his entire life.

Gubernatorial candidates Meg Whitman and Neal Kashkari shamefully squandered opportunities to expose the real Jerry Brown when Whitman ran against him in 2010, and Kashkair in 2014.  Therefore, it is important to know and remember Brown’s real record, and not the one he and his consultants have carefully created. 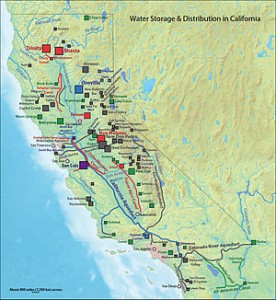 It was Jerry Brown and other Democratic leaders who killed the completion of state and federal water projects in the 1970’s.

The 10 largest reservoirs in California were built between 1927 and 1979. The New Melones Dam was the last reservoir built in California, completed in 1979. Since then, 15 million more people have been added to the state’s population count, without accounting for water resources or storage.

Brown has also enthusiastically supported massive water diversions for fish. According to California historian Victor Davis Hanson, “Brown’s decisions have left no margin for error in a state now home to 40 million people.” Hanson warns that Brown’s new mandated restrictions “will bring home another truth as lawns die, pools empty, and boutique gardens shrivel in the coastal corridor from La Jolla to Berkeley: the very idea of a 20-million-person corridor along the narrow, scenic Pacific Ocean and adjoining foothills is just as unnatural as ‘big’ agriculture’s Westside farming.

“The weather, climate, lifestyle, views, and culture of coastal living may all be spectacular, but the arid Los Angeles and San Francisco Bay-area megalopolises must rely on massive water transfers from the Sierra Nevada, Northern California, or out-of-state sources to support their unnatural ecosystems,” Hanson recently wrote.

While Brown, Democrats and the corrupt media turn their attacks on “big agriculture” for daring to water crops, ranches and livestock, while ignoring their own lifestyles, Hanson said corporate giants like “Big Apple,” “Big Google,” and “Big Facebook” assume that their multimillion-person landscapes sit atop an aquifer.

“But they don’t—at least, not one large enough to service their growing populations. Our California ancestors understood this; they saw, after the 1906 earthquake, that the dry hills of San Francisco and the adjoining peninsula could never rebuild without grabbing all the water possible from the distant Hetch Hetchy watershed,” Hanson said. “I have never met a Bay Area environmentalist or Silicon Valley grandee who didn’t drink or shower with water imported from a far distant water project.”

“Now that no more reservoir water remains to divert to the Pacific Ocean, the exasperated Left is damning ‘corporate’ agriculture for ‘wasting’ water on things like hundreds of thousands of acres of almonds and non-wine grapes,” Hanson added.

Brown behaves as if he is still the boy-governor of the 1970’s. Marie Antionette and King Louis XVl were married when she was 14 and he was 15. She famously ordered hundreds of gowns every year, had a serious shoe habit, was a heavy gambler, and spent lavishly on her “pleasure house” at Versailles. The French people called her ‘Madame Deficit.’

Brown, who could be called “Monsieur Deficit,” is obsessed with his legacy, but not deficit spending. He has childishly pursued building his $68-$100 billion high-speed-train-to-nowhere. California doesn’t need a high-speed train. We do need new reservoirs, and desalinization plants.

And so does “what’s mine is mine, and what’s yours is mine.”

Brown is out to control not just the water in California; he wants control of the peasant class of taxpayer, and tell the people where to live, how to live, and how much water and electricity we can use, until the people have no bread.