Senate Bill 277 by Sen. Richard Pan, D-Sacramento, unleashed a passion and a rage in California voters not seen in for years. The bill angered so many parents, Assembly and Senate recall elections are underway across the state, and a referendum to repeal the mandatory vaccination bill has been launched. 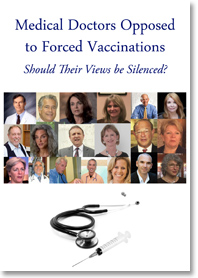 Parents say the new law violates Constitutional rights, as well as their right to choose what’s right for their children. Aren’t Democrats all about the right to choose, or is that only for abortions?

There are three important issues at stake in this argument:

I recently interviewed a physician who said he’s come full circle on the vaccine issue after doing years of his own research. He used to believe vaccines were safe and foolproof, but has a different professional opinion today.

The Hippocratic Oath, taken by graduating physicians says, “First, do no harm.”  “Vaccines have risk.  They should be a choice.  Potential harm should be forced on no one,” said the physician I interviewed. He asked for anonymity out of concern of retribution.

California lawmakers have trampled all over parental rights, and taken away even more parental choice and informed consent regarding vaccinations for their children, when Gov. Jerry Brown recently signed SB 277 into law.

It mattered very little to lawmakers that thousands of parents descended upon the state Capitol every time SB 277 was heard in legislative committees. The thousands of parents canvased lawmakers’ offices, phoned and faxed Senators and Assembly members, made signs, held rallies, created Facebook pages and Twitter accounts, all just for a chance to be heard by their elected lawmakers.

The more that parents implored lawmakers not to pass the bill, the more Sen. Pan and supporters dug their heels in and refused to talk with them.

There’s a growing distrust about the safety of vaccines, causing more and more parents to say no to vaccinating. And doctors like Dr. Pan aren’t helping the cause. When a doctor has to turn to government to force a procedure on patients, that doctor has done a horrible job of persuading and educating those patients.

Parents have told me awful stories about being kicked out of a pediatric practice for inquiring about the contents of vaccinations, or possible side effects. Parents say the attitude and reaction from many medical professionals amounts to a “how dare you question my professional advice” attitude.

Also creating the distrust is a compelling new study by the Office of Inspector General published earlier this year, which found many of the physicians on the CDC’s advisory panel on vaccine policies had never filled out conflict-of-interest forms. The doctors had received funding from pharmaceutical companies. Yet these doctors are involved in the approval of vaccines in the U.S. vaccine policy.

These doctors had a clear interest in the outcome of the decisions they’re making, but did not declare those conflicts of interest, or exempt themselves from the process.

The Centers for Disease Control and Prevention, the Institute of Medicine, and even the American Academy of Pediatrics have acknowledged that serious reactions, including seizures, progressive encephalopathy, and death, can and do occur with vaccinations. But that was never discussed during the committee hearings on SB 277 – even to allay parents’ fears. Vaccine science is not settled, and attempts to discuss it are obstructed.

“The science is clear that vaccines dramatically protect children against a number of infectious and dangerous diseases,” Brown wrote in his bill-signing message. “While it’s true that no medical intervention is without risk, the evidence shows that immunization powerfully benefits and protects the community.”

Between 3,000 and 4,500 severe vaccine reactions, up to and including death, occur every year in the United States, according to the Centers for Disease Control. Some doctors say that the numbers of severe reactions to vaccinations are underreported and are much higher than the CDC’s numbers. So why would the California Legislature and the governor blindly go along with the program. Surely you have to ask yourself why, given the statistics available.

“Vaccines are not without risk, and have even been deemed ‘unavoidably unsafe’ by the government,” the physician I interviewed told me. And he knows what he is talking about: he worked for more than a decade running an Immunology practice, back when he believed everything he was taught in medical school about vaccinations.

“The issues of ‘herd immunity’ and immunocompromised persons, the two main arguments for coerced vaccination, deserve examination,” he said.

While the United States gives more vaccines at an earlier age than any other country, it is also dead last for developed countries for infant mortality, he explained. Many countries have modified their vaccine schedules by eliminating some vaccines, giving them at a later age, or spreading them out.  Their vaccine injury rates have gone down, while the diseases targeted have remained low.

This modified schedule is what most of the parents who object to SB277 were merely asking for.

On example the physician offered is the Hepatitus B vaccine, administered at birth, and again two months later. “The amount of aluminum given to the newborn baby is almost 14 times that approved by the FDA for IV fluids, but vaccines don’t get the same scrutiny,” the doctor explained. “Now consider that Hepatitis B is a disease typically transmitted sexually or by IV drug abuse and that less than 1 percent of mothers are Hep B positive.  Vaccinating a newborn with Hep B might make sense if the mother is Hep B positive, but what about the other 99 percent of babies?” 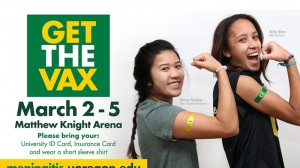 Herd immunity is the concept that if a given percentage of the population is vaccinated against a disease, the disease won’t be able to spread through the population – that the unvaccinated get a free ride off of the vaccinated.  “This idea is where those who advocate mandatory vaccination legislation (SB277 and others) get their belief that we must sacrifice personal beliefs and liberties for the ‘greater good’” he explained.

If for example, someone gets measles as a child, she will have protection against measles her entire life.  Getting vaccinated against measles on the other hand gives a somewhat unreliable and transient immunity at best – vaccinations wear off.

“With vaccines, herd immunity is nearly impossible,” the physician said. “This is why even in a country like China, where forced vaccination has yielded a nearly 100 percent vaccination rate, there have still been hundreds of measles outbreaks over the last several years.”

Children and adults with various immune deficiency disorders cannot get some or all vaccines.

Ironically, according to the physician, the immunocompromised are at most risk from those who have recently received live-virus type vaccines (measles and chickenpox for example).  Many hospitals forbid patients with recent vaccinations coming into intensive care units or pediatric cancer units.  Most people don’t know that people can shed these viruses after vaccination for several days or more.

‘Most Physicians are Wrong’

“Ironically, physicians don’t learn about risks of vaccines.  They may acknowledge an extremely rare ‘anaphylactic’ (allergic) reaction, but have not been taught or taken the time to read the literature that may challenge their views or add to their knowledge of vaccine risks,” the doctor told me.   “There is a herd mentality in medicine which tends to stick to the ‘party line’ as put forth by various professional societies and academic centers.  These entities are often funded or supported in a multitude of ways by the pharmaceutical industry, as is the media, so bias develops that ignores or minimizes problems with vaccines.  Once in practice, physicians often get most of their information on a new drug or vaccine from the pharmaceutical sales representative – hardly an objective source.  They read journals and go to meetings, but confirmation bias leads them to only look at one side of an issue.” 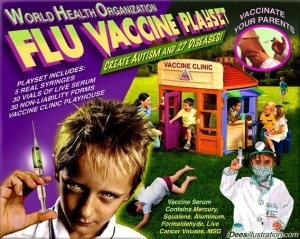 “The Nuremberg code was developed out of the Nazi trials after World War 2 and set guidelines for the ethical treatment of voluntary subjects, including such principles as informed consent and absence of coercion, properly formulated scientific experimentation, and beneficence towards experiment participants,” the physician said. “SB277 effectively removes informed consent.  Vaccine safety is not well established by proper studies with double blind randomized studies and proper controls.”