PART ll in ALRB Series: The Sordid Story of the Radicals at the CA Ag Labor Board. Click here for Part l

The ALRB’s Regional Director in the Central Valley, Silas Shawver, has a history as a union organizer, as do other ALRB employees. Shawver describes himself as a “union organizer turned lawyer.” (see graphic at right), and on his Linkedin page, Shawver lists “Organizer” as one of his jobs with UNITE HERE (graphic below).

“The California Agricultural Labor Relations Board was created in 1975 to ensure peace in the fields of California by guaranteeing justice for all agricultural workers and stability in agricultural labor relations,” the ALRB states on its website. “The Board seeks to achieve these ends by providing orderly processes for protecting, implementing, and enforcing the respective rights and responsibilities of employees, employers and labor organizations in their relations with each other.”

Yet, Silas Shawver has been the prime ALRB attorney trying to prevent field laborers at Gerawan Farming from voting in a decertification election of the United Farm Workers in 2013. He confiscated their ballots, and ordered them destroyed instead of overseeing counting the ballots.

Shawver, the former Directing Attorney for the Fresno Migrant Office of the California Rural Legal Assistance program, has led the contentious labor union issues at both the Gerawan Farming and the H & R Gundlund Ranches.

The ALRB has another union organizer working on contentious decertification cases against farms and ranches. Jessica Arciniega, the regional director and lawyer in Salinas for the ALRB, is a former UFW organizer who completed her first year of study under attorney Barbara Macri-Ortiz, another former union lawyer who helped set up California’s unique legal apprenticeship program. California law allows prospective attorneys to skip law school and earn the right to practice by serving apprenticeships. The UFW has made regular use of the program, turning out many union attorneys just like Arciniega. This 2004 Los Angeles Times story highlights Arciniega and Macri-Ortiz, and identifies Arciniega as “a Pomona-Pitzer colleges graduate who worked on UFW union organizing campaigns before plunging into the law.”

In this youtube video, Barbara Macri-Ortiz (At 04:45) talks about the ALRB and her apprentice Jessica Arciniega. 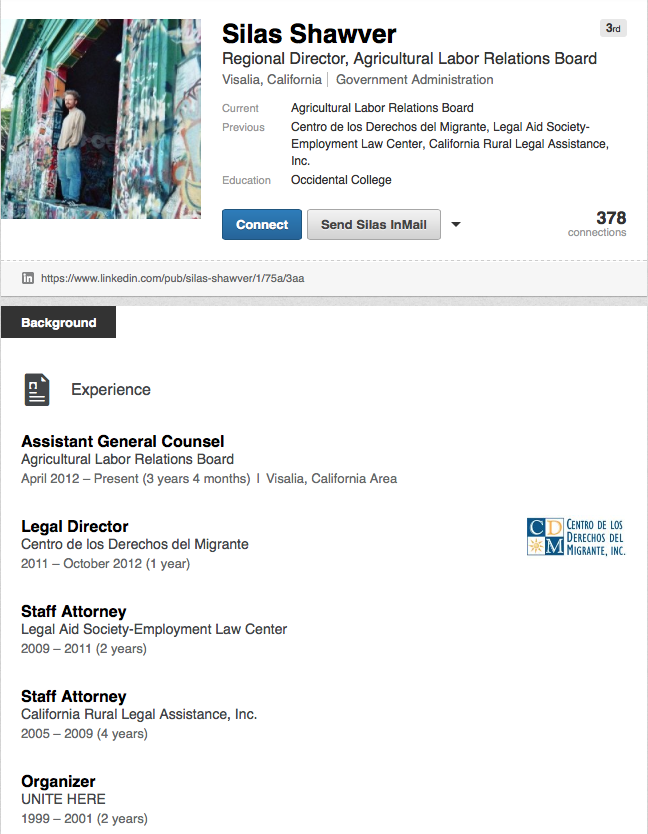 Gunlund alleges that Shawver deliberately misled the workers in order to keep them agitated to fuel his case against the ranch.

When Shawver was hired at the ALRB in 2012, the agency picked up where the CRLA left off and continued its cases against the Gunlund family.

Governor Jerry Brown had appointed Sylvia Torres-Guillen as the board’s general counsel in 2011. By 2012, Torres-Guillen hired Shawver as her assistant and as director of the board’s regional office in Visalia, where he continued to prosecute the case – this time as an ALRB attorney.

‘Neutral’ Judge Not So Neutral

ALRB administrative law judge Mark Soble, billed as a “neutral administrative judge,” presided over the hearings, and ruled against Gunlund in late 2013. Both Shawver and Soble work in the ALRB Office of General Counsel with Sylvia Torres Guillen, so how ‘neutral’ is he?

In 2013, ALRB Judge Soble was accused of bullying and intimidating during the first hearing of the UFW and Gerawan Farming matter by farmworkers who do not want to join the UFW.

Where case searches showed Soble appearing as the Administrative Law Judge in ALRB cases, he has favored UFW and has ruled against employers. Many of these cases involve the same issues that are involved in Gerawan Farming’s current case before Soble, including decertification efforts by employees and UFW’s abandonment of “represented” employees.

Soble allowed his ALRB hearing in 2013 to be used to retaliate against Gerawan and its employees for having urged lawmakers to defeat a bill that would have increased ALRB’s power. The ALRB did so in concert with the general counsel of the United Farm Workers labor union.

Court documents also show that Soble joined the UFW in a political inquisition to demand the names of the assemblymembers and the Gerawan farm workers who met with them during a visit to the State Capitol to lobby against SB 25 in 2013. SB 25, by Sen. Darrell Steinberg, D-Sacramento, would have expanded the ALRB’s powers to impose UFW contracts on farmworkers while freezing the workers out of the decision making process. Some Gerawan employees had joined the company’s owner in Sacramento to petition their representatives in 2013.

The transcripts show a kangaroo court with repeated demands to know the identities of each worker who exercised their Constitutional right to petition their state representatives. Both Silas Shawver and Judge Soble asked series of questions to establish the identities, including surnames, of the Gerawan workers who petitioned the assemblymen on the ALRB empowerment bill. And Soble and Shawver demanded to know what company owner Dan Gerawan and the workers told legislators.

“What makes this abuse of power even more egregious is that the direct beneficiary of the legislation that the employer and workers lobbied against is this same agency, and the very same officer, who are not interrogating and suing them for it,” Assenblyman Jim Patterson, R-Fresno, and seven Assembly colleagues wrote in a letter to Gov. Jerry Brown, in response to the ALRB inquisition.

“This latest example of abuse of authority is not the first time we have received complaints about the General Counsel’s conduct but is certainly the most dramatic and concerning,” the lawmakers said, “particularly because it involves the blatant infringement of the constitutional rights of California citizens by an officer of the court.”

At issue in the case was whether or not Gunlund “fired” some of its workers illegally. Seasonal workers come and go as planting and harvest conditions permit, and work is often dependent on weather and other irregular factors. However, it is against the law in California for employers to fire workers for complaining about work conditions or seeking to organize for better pay or terms.

In late November, 2009, the CLRA received a complaint that Gunlund had illegally laid off the seasonal grapevine workers. CLRA attorney Shawver helped them report Gunlund Ranches to the ALRB. The workers involved with the complaint then learned that they were not re-hired. Shawver apparently assumed – and led others to assume – that Gunlund was retaliating against them illegally for filing the complaint with the ALRB.

Interviews and records show that the family member responsible for vineyard operations, Gerald “Gere” Gunlund, had to be away on medical leave through December, and that the family had nobody else to supervise the grapevine crews.

Vineyard workers were told they would be rehired in January 2010 following his medical procedure.

But the snafu came when workers received their paychecks. Shawver told the workers they were fired, which precipitated the need for the final payout check, which they received two days later.

Transcripts of the Gunlund case from 2010-2013 show that Judge Soble voiced serious doubts about crucial parts of Shawver’s testimony. However, in his ruling, Soble declared Shawver to be a “credible” witness. The judge found that workers critical of Gunland were also uniformly credible, while all Gunlund family members and managers were “not credible.”

The record shows that in making his decision against Gunlund, Soble disregarded substantial uncontested testimony and evidence, and brushed over Shawver’s own testimony that Soble earlier had found spurious. A review of Soble’s decision shows that when the testimony of an H & R Gunlund supervisor, Manlio Moreno, and an ALRB staffer, Silas Shawver, conflicted, Soble deemed Shawver’s testimony to be the credible version of events.

In a footnote to his 2013 ruling against Gunlund after four years of hearings, Judge Soble called Shawver “a creditable and even highly persuasive witness for most of his testimony.” …most, but not all.

During the course of the case, Shawver’s status had changed. He had initiated the case against Gunlund as a private attorney in 2009. The case ended with Shawver serving as ALRB assistant general counsel, and regional director of the Visalia office. Shawver and Judge Soble were now colleagues under Torres-Guillen.

In 2012, General Counsel Torres-Guillen added more cases against the Gunlund family, filing an amended and consolidated complaint that a total of 62 workers had been wronged.