Since 1976, Lake Superior University annually publishes a “List of Words Banished from the Queen’s English for Mis-use, Over-use and General Uselessness.” A few of the obnoxious, overused words on the 2015 list include “polar vortex,” “takeaway,” and “foodie.”  “Wasn’t it called ‘winter’ just a few years ago?” one student asked. “It’s ridiculous. Do we call people who like wine ‘winies’ or beer lovers ‘beeries’?” asked another.  I love semantics. 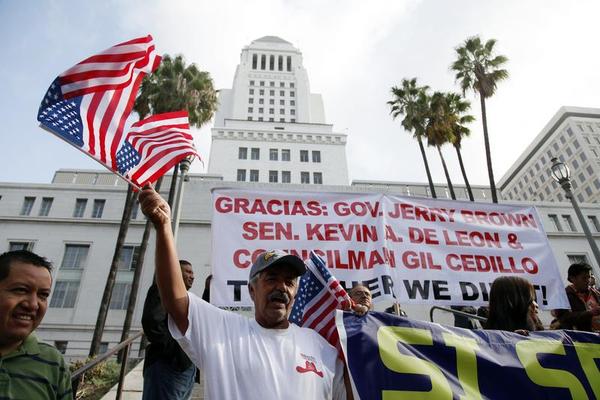 But from the “you-can’t-make-this-stuff-up” file, in 2013, Big Brother officials in Seattle called for a ban on “potentially offensive” language. Government workers in Seattle were told that the words “citizen” and “brown bag” were deemed “potentially offensive” and would no longer be used in official documents and discussions. Seattle officials also said the word “citizen” was banned “because many people who live in Seattle are residents, not citizens.”

Perhaps this is where Jerry Brown got his latest hair brained idea.

“Mendoza said removing the term ‘alien’ was an important step toward modernizing California law because it is now commonly considered a derogatory term with very negative connotations,” the AP/CBS reported.

“The only vote against the bill came in the State Assembly, from Assemblyman Matthew Harper, R-Huntington Beach (Orange County), who told the San Francisco Chronicle that the bill was ‘just a way for legislators to get their names in the paper….[t]he negative connotations come from the fact that people are breaking the law. Changing the word won’t change the fact that folks are here illegally.” Breitbart reported.

Mendoza’s office reported a study conducted by the Pew Research Center, which found “the use of ‘illegal alien,’ a term considered insensitive by many, reached its low point in 2013, dropping to 5% of terms used. It had consistently been in double digits in the other periods studied, peaking at 21% in 2007.”

What changed was liberal media deciding that calling illegal aliens “illegal aliens” just wasn’t kosher. I even had an editor who got prickly when I used the expression, but not for any concern for immigrants; he was concerned about how it would make our publication look. But the term is accurate. They are not legal immigrants, and to infer that they are is a lie.

A Law Does not Make it So

Someone needs to tell Governor Censor-in-Chief that it doesn’t work that way. The folks are still here illegally. And if someone’s panties are in a bunch over it, then start dealing with the phalanx of “undocumented immigrants” who emigrate to the U.S. by illegally crossing the border, who then avail themselves of government services paid for by U.S. citizens and taxpayers, take lower wage jobs that Americans need to enter the job market, flood public schools with non-English speaking students lowering all schools’ test scores and taking up valuable teaching time from other students, who then aren’t required to take English immersion courses, and flood doctors offices and hospitals with medical needs — also paid for by U.S. taxpaying citizens.

I have big heart for people who live in impoverished third world countries and dream of making a new life. But the U.S. government hasn’t properly dealt with immigration and illegal immigration since before Ronald Reagan became president and passed an bandaid amnesty bill. That is the problem — and the underlying reason third world people flood our borders… but that’s another story.

The same AP/CBS news story said, “In 1970, the Legislature repealed labor code that discriminated against immigrant workers by requiring that citizens be given preferential treatment for employment. However, the term can still be found in other portions of the labor code.” But the code the reporter referenced isn’t relevant — discriminating against “immigrants” is one thing – it says nothing about people here illegally, who shouldn’t be here at all. Technically, and according to federal law, illegal aliens do not have legal rights in our country. And voters overwhelmingly say the illegal alien immigrants should not have the same legal rights and protections that U.S. citizens have.

America’s weak-kneed politicians are 100 percent at fault for creating the current and ongoing immigration mayhem. And Gov. Jerry Brown is at the top of the heap for allowing hundreds of thousands of destitute illegal aliens into this state, and locking them into a life of poverty. Most want immigrants to come here and thrive, because the entire state is better off if immigrants thrive.

Until foreign born people have a legitimate, reasonable immigration process into the United States, illegal aliens will remain illegal and aliens — despite Jerry Brown’s semantics order.