The Associated Press released a report this week which found that a fraction of the promised jobs have been created following passage of the 2012 Proposition 39, by billionaire hedge-fund manager and green-jobs shill Tom Steyer. Prop. 39 is bringing in millions less each year than initially projected, according to the AP. “Proponents told voters in 2012 that it would send up to $550 million annually to the Clean Jobs Energy Fund. But it brought in just $381 million in 2013, $279 million in 2014 and $313 million in 2015,” the AP reported. 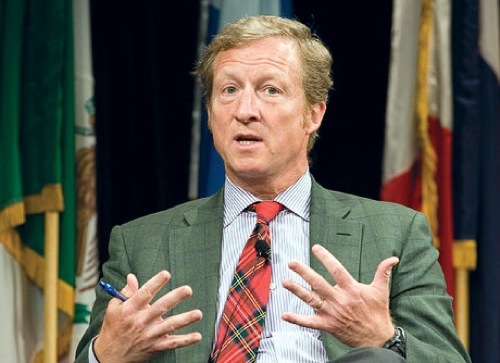 Sadly this isn’t news to many. In 2012, I reported extensively on Prop. 39, and had no illusions about the anticipated revenue, and rather was cynical about the real goal of the initiative.

The AP report also found that the state has never produced anything showing much work has actually been done or if any energy has been saved.  Steyer spent in excess of $21.9 million to convince voters to approve the ballot measure to raise taxes on corporations ostensibly to generate clean-energy jobs. But that investment by Steyer may have been made in billionaire Tom Steyer.

“It’s clear to me that the Legislature should immediately hold oversight hearings to get to the bottom of why yet another promise to the voters has been broken,” Senate Minority Leader Bob Huff, R-San Dimas, said in a news release Monday.

The AP reported that three years after Prop. 39 was passed, the anticipated revenue “is trickling in at a slower-than-anticipated rate, and more than half of the $297 million given to schools so far has gone to consultants and energy auditors.”

Arrogantly and telling, is the board created to oversee Prop. 39 and report on it to the Legislature never met once in three years.

Prop. 39 required businesses headquartered out of California to use the “single sales factor method,” in which their tax liability is based solely on their amount of sales in the state. Once Prop. 39 passed, they are no longer allowed to use the other option, known as the “three-factor method,” which bases tax liability on a combination of the sales, property and number of employees a business has in the state.

In 2009 the Single Sales Factor was added as an option – the “three factor” formula was left alone, and was not, and still is not, a tax cut. It was the standard way of doing taxes since 1966. The tax cut in 2009 was for companies that paid less under Single Sales Factor, once they got the option. The deal was negotiated between then-Gov. Arnold Schwarzenegger and the Legislature.

“So while tech companies Genentech, Viacom, Amgen, Cisco, and Qualcomm got the tax cut in 2009, now Prop. 39 raises taxes on the rest of the large, out-of-state businesses, like Kimberly Clark, International Paper, Chrysler and General Motors, which did not receive the tax break in 2009,” I wrote in 2012.

Then-Assembly Speaker John Pérez endorsed Prop. 39 in 2012 when he failed to pass his own identical legislation, AB 1500, thus allowing what should have been a legislative decision to become a voter decision.

While Prop. 39 claimed to seek to change the way corporations calculate their taxes, the estimates of $1 billion in tax revenue was the real prize.

Steyer at the Press Club

Steyer appeared in 2012 at the Sacramento Press Club on his Whistlestop tour for Prop. 39. He was light on details about the initiative.

Steyer said in 2012 that Prop. 39 was not a tax increase, and “will not cost Californians a single penny more. Instead, it will correct an expensive mistake made in a shady deal under the cover of night that is costing California $1 billion.”

He added, “In making a move for tax fairness, this will give us a more stable tax base, and a more solvent California. This is a loophole that shouldn’t be there–it’s a disaster for every person in California. In closing the loophole, we will get back to something fairer.”

The word “loophole” to describe the tax deal was been bandied about quite loosely by supporters of Prop. 39 and AB 1500.

Steyer referred to the 2009 legislative deal as a “gimme,” and said that “a lot of money had been given away.”

I wrote in 2012 that Steyer may have had some of his own interests in mind. While the state stood to collect about $1 billion in added revenues each year, half of that money would be required to be used on the Clean Energy Job Creation Fund for the first five years. After five years, all of the additional tax revenue would go to the state’s General Fund – a delicious deal.

Steyer is the co-chairman of the Clean Energy Job Creation Fund, and is heavily invested in clean-tech businesses, which many have said potentially stood to benefit greatly from the $1 billion of additional state tax money. Tom Steyer is the billionaire founder of the San Francisco hedge fund Farallon Capital Management, a major investor in green energy, and a man the San Jose Mercury News called “the Bay Area’s version of George Soros.”

“The only other major financier is a group called Californians for Clean Energy & Jobs, the co-chair of which is…Tom Steyer,” reported Troy Sendick.

Steyer told the Press Club that the fund would go to retrofitting state buildings, schools and private sector buildings for energy efficiency. “This will create tens of thousands of jobs,” Steyer said. “This is investing money.”

Steyer quoted from a Legislative Analyst’s Office report, and said that an estimated 40,000 jobs will be created.

He said that after the retrofits, the energy costs for the buildings will be lower, and building owners “should make money back.”

Dorothy Rothrock, then-vice president of the California Manufacturers and Technology Association, challenged Steyer. She asked, “You cite the LAO report that says 40,000 jobs would be created by a mandatory Single Sales Factor. But the study did not assume that Single Sales Factor was already an option for companies who want to grow in the state. Isn’t that misleading to voters?”

Steyer said that the existing taxing system encourages companies to fire their employees and take their business out of California. But he did not answer Rothrock’s question.

I asked Steyer at the Press Club meeting, “There have been many news stories of your own investments into green tech companies, and green businesses. How many of your businesses would benefit from an infusion of this money?”

Steyer looked incredulous and said that he had no idea that people were saying that about him, but that his businesses will not benefit. He added: “I don’t think Prop 39 is going to change many lives.”

Apparently he was telling the truth; only 1,700 jobs  – not 40,000 — have been created in three years. How could the money possibly be accomplishing what voters were promised… unless the voters were lied to?