Rather than waiting for proposed assisted suicide legislation to work through the legislative committee process earlier this year, a lawsuit asked the California Superior Court to find that patients facing the end of life have a “civil right” under the California State Constitution “to make their own decisions about their bodies.” 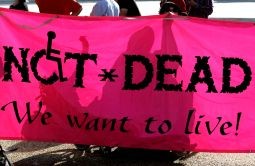 But a Superior Court judge dismissed the lawsuit saying that physician-assisted suicide should be addressed in the Legislature.

Yet that’s exactly what the lawsuit was trying to avoid. When the latest assisted suicide bill, the “End of Life Option Act” was shelved in July because Democrats could not get enough Democrat votes, many insiders thought that the bill, and issue, was dead on arrival – particularly after the judge’s ruling.

“This is a heavy-handed attempt to force through a bill that could not get any traction at all in committee,” said Tim Rosales, spokesman for Californians Against Assisted Suicide. “It’s one thing to run roughshod over the normal committee and legislative process to jam through a district bill, but to do that on what is literally a life-and-death issue is clearly abusive, and should concern all Californians.”

Assisted suicide is a deadly mix with our profit-driven healthcare system; assisted suicide saves insurance companies money, Not Dead Yet and the The Disability Rights Education & Defense Fund remind us.

SB 128 gained media attention last legislative session when Brittany Maynard, the poster girl for Compassion & Choices, the nation’s leading voice for assisted suicide, took her own life rather than live and die with brain cancer. Maynard’s husband attended Capitol legislative committee hearings in support of SB 128.
Maynard also became a full-time activist with Compassion and Choices, a George Soros-funded pro-suicide-organization that has tried to convince lawmakers it is a grassroots organization. Compassion and Choices is formerly known as the Hemlock Society. The Hemlock Society founding slogan, “Good life, good death,” was discarded for the politically correct sounding, “Promoting end-of-life choice.”

“Suicide is an impulsive and ambivalent act,” said Dr. Aaron Kheriaty, the Associate Professor of Psychiatry and Director of the Program in Medical Ethics at UC Irvine School of Medicine. I spoke with Dr. Kheriaty in February about SB 128, the previous “End of Life Option Act,” to authorize medical aid-in-dying in California, and again this week about ABX2-15. Kheriaty has helped hundreds of people through suicide crises, and says many of the people who want to have physician assisted suicide, are more concerned with being a burden on others.

Ironically, proponents of physician assisted suicide in California failed with SB 128 through the ordinary democratic legislative process when the bill encountered bipartisan opposition and stalled in the Assembly Health Committee, Kheriaty said. “Now in a desperate and cynical maneuver, they are attempting to bypass the ordinary legislative process and ram this bill through as ABX2-15 in a special legislative session called by the Governor to address healthcare financing in California.”

“The Governor has already indicated through a spokesperson that he is not happy with this tactic, said Kheriaty. “It is ironic, and perhaps telling, that the same proponents who insisted that the assisted suicide bill had nothing to do with healthcare economics are now attaching the legislation to a bill, and a special legislative session, specifically designed to address economic issues in medicine.  If, as proponents claim, Californians are rushing to embrace this supposed “right” to assisted suicide, why not legalize this practice through ordinary democratic legislative means?  The answer is that proponents are losing this argument in California (and in every other state where this has been proposed in the past year), and they are desperate to demonstrate to their funders that they are still trying.  The tactic won’t work.”

“We’re shocked that they would use this legislative maneuver to jam through a bill that’s clearly a life and death matter for Californians,” said Marilyn Golden, a policy analyst with Disability Rights Education and Defense Fund. Golden has been fighting assisted suicide for many years, and has repeatedly warned that “choice is deceptive.”

“We must separate our private wishes for what we each may hope to have available for ourselves some day and, rather, focus on the significant dangers of legalizing assisted suicide as public policy in this society as it operates today,” Golden says. “The very small number of people who may benefit from legalizing assisted suicide will tend to be affluent, white, and in possession of good health insurance coverage. At the same time, large numbers of people, particularly among those less privileged in society, would be at significant risk of harm.” Golden added: “Assisted suicide would have many unintended consequences.”

“The problem, of course, is that once the issue is reduced to a subjective personal choice we are, for all intents and purposes, out of the suicide prevention business,” Republican media consultant Wayne Johnson recently wrote in an op ed. “Why?  Because when choice is king, waiting periods and consent forms become nothing more than infringements on a basic right, one that the 15-year-old heartbroken over a romantic breakup has as much right to claim as a presumably terminal cancer patient.”

“We care about the sick, the poor and the unemployed,” Johnson said. “We care about the heartbroken teenager, and the kids whose parents are going through an ugly divorce.  Our heroes are the good Samaritans and the rescuers, those who place themselves at risk for others. Those who care.  And if we deserve to be called a just and compassionate people, we will continue to not only care, but to intervene.”