Prevailing Wage Scams Between State DIR and Unions: The Destroyer

This is Part ll of Prevailing Wage Scams Between State DIR and Unions. Part l is HERE

Janitorial company owner Jeff Baron is in trouble with the state of California because large general contractors who hire him as a subcontractor charge the state the union prevailing wage rate of $48.50 per hour in their bids on public works projects, but then refuse to pay him that rate. Taxpayers are on the hook for paying $48.50 per hour for janitors on public works projects, but in reality, subcontractors like Baron’s janitorial clean up company, are only paid the going rate of $10 to $15 per hour, and the general contractors pocket the rest. 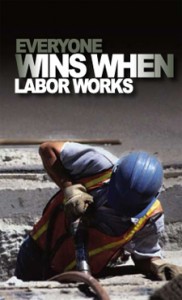 Some say the Riverside District Attorney is going after Baron Services because it’s easier to go after small subcontractors — low-hanging fruit.

In the middle of all of Jeff Baron’s troubles is James Reed, Executive Director of the Center for Contract Compliance, and former Department of Industrial Relations employee. The CCC is a labor compliance company, which the Department of Industrial Relations contracts out with on labor code enforcement. The labor compliance contractors are paid a percentage of penalty assessments by the DIR; clearly they have a vested interest in finding violations – under loopholes James Reed is familiar with

The Center for Contract Compliance (CCC) is a non-profit organization that was created in response to the concerns of contractors and labor with the unlawful disregard for the laws governing public works.

The CCC was founded by the Southern California District Council of Laborers and its affiliated local unions in conjunction with the following contractor associations:

The Center for Contract Compliance is a strong arm of labor, and a contractor for the state agency Dept. of Industrial Relations. It’s curious why the DIR contracts out for this work instead of doing it within the agency.

Remember, Jeff Baron says for five years he has tried to address the conflicting prevailing wage rates within the proper channels. He has been a whistle blower, in effect, trying to expose this loophole costing many small business owners a great deal of money, and lost jobs. And many in the industry say James Reed has a vested interest in keeping this loophole in the labor code — with the help of the local Laborers union.

To make matters more confusing and suspicious, in Northern California, the DIR allows janitorial wage rates in line with market rates; the state does recognize a wage rate at about $12 per hour for janitorial work. California Public Utilities Code Sections 465-467 require public utilities to pay prevailing wage rates for labor of a custodial or janitorial nature, and therefore the California Department of Industrial Relations determined wage rates for this kind of work.

However, for Southern California, the Department of Industrial Relations sets the total straight time hourly “prevailing wage” for a journeyman in the Group 1 classification of “Laborer, General Cleanup” at $45.93 in 2013, and $48.50 in 2015.

For Northern California, the state-mandated total straight time hourly “prevailing wage” rate for a journeyman in the Laborers Group 4 trade classification applies to the following:

“There is no classification under the labor code that the Department of Industrial Relations that is written to apply to janitorial work that labor compliance companies will accept on public works jobs,” Baron told me in 2013. “They want to classify us under ‘rough clean up’ Group 1 General Labor, which is NOT the work that we perform.” This remains true today.

Even in the face of this confusion, and the many charges being hurled at janitorial business owners, the DIR continues to lump final cleanup janitorial work under the classification of Group 1 General Labor, essentially authorizing an industry-wide trap. This trap benefits the Laborers Union, eliminates competition with the SEIU, but even more corrupt, this trap creates a great deal of business for state Labor Compliance Programs, like James Reed’s Center for Contract Compliance.

Interestingly, the SEIU Local 1877 has a realistic and fair market rate of  from $9 to $15 an hour, which Baron has historically paid his employees.

Consequently, only Southern California janitorial subcontractors are charged with not paying janitorial workers the prevailing wages classified for Group 1 General Labor, which is the way the Laborers International Union of North America Local 1184 wants it.

In what strange world do janitors get paid $48.50 per hour?

I called the DIR and asked for a status update on Baron’s case, and an explanation linking it to the Riverside DA’s case. Deputy Labor Commissioner Morgan Levanger referred my requests to public information officer Julia Bernstein, who emailed her response Tuesday morning:

“A citation known as a Civil Wage and Penalty Assessment (CWPA) was issued on 9/22 and received by Baron Services (according to the U.S. Postal Service) on 9/25.

Baron Services has 60 days from receipt of the CWPA to request a review or formal hearing on this matter from the Labor Commissioner’s Office.”

Bernstein also noted, “Public works law requires private construction contractors to pay prevailing wages to their workers and requires the construction contractor to follow public works law when working on a project funded by a public entity.” This is the clause the DIR, the Center for Contract Compliance, and the Riverside District Attorney are basing their cases against Baron.

But for decades, and until James Reed got involved, general contractors who hire the subcontractors charge the state the union prevailing wage rate of $48.50 per hour in their bids on public works projects, but then refuse to pay subs like Baron janitorial that rate because it is so inflated.

The images in these stories come from the CCC website.

CORRECTION:This post has been updated to reflect a correction — In an interview, Mr. Reed said he has never worked for the state.