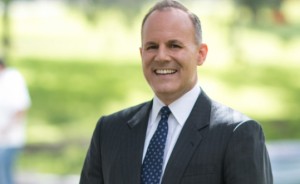 When asked in an interview why he is running for Los Angeles County Supervisor, Carr said, “I have three young children. My job as a parent is to protect them, imbue them with good values, and then turn over running the state to them.”

“However, if we don’t make the right decisions now, we’ll be handing over to my kids a less safe, less prosperous state,” Carr added. “We’ve got to get our house in order.”

Who is Elan Carr?

Carr is married to Dahlia Carr, a medical doctor specializing in rheumatology. They live in Los Angeles with their three children.

Carr has also had a very interesting career. He served in the U.S. Army in Iraq, and continues to serve in the U.S. Army Reserve Judge Advocate General’s (JAG) Corps. While in Iraq, Carr prosecuted terrorists in a first-time-ever Arab tribunal, litigated before Iraqi judges.

After winning one of the top-two spots in the primary in an 18-challenger race, Carr, a Republican, ran against former state Senator Ted Lieu, a Democrat, to replace Henry Waxman, who represented the 33rd Congressional District for 40 years. “We outperformed Republican registrations by 18 points!” Carr said.

Los Angeles County’s 5th District, currently represented by Supervisor Mike Antonovich, is mostly rural and conservative. Antonovich is termed out in 2016. Kathryn Barger, Antonivich’s chief deputy, is also running for the seat, and has received his endorsement.

“At all levels, government has failed to take care of people,” Carr said. “There’s a real unity of frustration; everyone has a sense that the system is broken.”

As with his congressional run, Carr said he will remain focused on crime as a central issue. “Crime is up 30 percent. Schools are undisciplined. We’ve lost jobs; LA County is hemorrhaging, and employers are fleeing California,” Carr said. “And there’s been a big uptick in gang on gang crime – gang shootings and murders taking place in fairly nice neighborhoods.” Carr said even Los Angeles Mayor Eric Garcetti recently held a press conference begging gangs to stop warring with each other.

The County Board of Supervisors are made up of only five supervisors, governing a county of more than 10 million residents, and oversee an annual budget of more than $26 billion.

“Given the sharp increase in crime throughout the state, I want to be able to hold an office where I can protect the residents of Los Angeles County,” Carr said. “And it’s not just because of AB 109 and Proposition 47; we’re adopting policies which are undermining the police.” Carr said elected officials are stoking the flames of the anti-law enforcement climate. AB 109, signed into law in 2011 by Gov. Jerry Brown, was Brown’s plan for prison realignment, which has resulted in letting thousands of inmates out of prisons, as well as moving state prison inmates down to county jails. Prop. 47 was sold to California voters as an initiative to decriminalize drug crimes, but in fact, has also decriminalized theft and date rape drug crimes. The only reason to possess a date rape drug is to commit a sexual assault.

Carr said one of his goals is to push to create a friendlier business environment in Los Angeles County to encourage existing businesses to remain, and new businesses to move to Los Angeles. “We’re driving businesses out of Los Angeles,” Carr said. “Taxes and regulations are at the center of this.” Carr said Los Angeles County passed coastal plans even more onerous than the notorious state Coastal Commission’s, which is torturing development. The County is piling on excise taxes and minimum wage increases, making it very hostile to do business in the county, according to Carr. “It’s a terrible climate – a litigious environment,” Carr said. While the state has strict labor laws, hour/wage laws, and the California Environmental Quality Act, he said Los Angeles County makes it worse. “It’s nothing short of suffocating,” Carr said. “Not a single business owner is happy, and most want to move, which means a loss of revenue and loss of jobs – and who does that hurt?”