Thomas Del Beccaro, a former chairman of the California Republican Party, is seeking the U.S. Senate seat being vacated in 2016 by Democrat Barbara Boxer. The burning question most people have for Del Beccaro is WHY? The district is a Democrat stronghold, having elected and reelected Boxer since 1993. 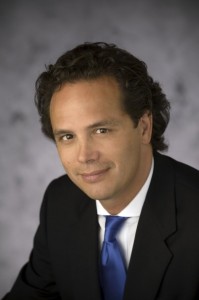 “California has had one-party rule in the U.S. Senate and the California legislature for most of the last twenty years,” Del Beccaro said. “The result has been a state that is number one in poverty, at the bottom in education, and suffering from chronic under-employment, water shortages and budget problems. Not coincidentally, California has the highest combined tax, regulatory and debt burden in the Country. Our problems are the fault of policy choices.”

“I’ve been advocating a flat tax for 30 years, and now Presidential candidates are starting to talk about it,” he added. “The flat tax is doable.”

But it’s going to be an uphill road, regardless of his solid ideas. California Attorney general Kamala Harris, a Democrat, and Democrat Loretta Sanchez, a former U.S. Representative, are vying for the seat as well, and thus far are polling much stronger in the San Francisco Bay area district.

Del Beccaro, a small business attorney, would like an opportunity to debate all of the candidates on ideas, including one-term Assemblyman Rocky Chavez, R-San Diego, and Duf Sundheim, also a former California Republican Party Chairman.

Del Beccaro said the flat tax could reduce the 77,000-page IRS tax code to less than 20 pages. “Distrust of the IRS is growing today,” he said. “There is real hatred for Lois Lerner. The IRS scandal shouldn’t be surprising given that our annotated tax code is more than 77,000 pages long and the basic code contains more than one million words.  That leaves a lot of room for interpretation or for government to be abusive.”

Del Beccaro’s economic advisor, Stephen Moore, says the laws of economics are simple: The more something costs, the less of it that is produced or acquired. Moore, who helped Presidential candidate Sen. Rand Paul develop his flat tax plan, says a plan that reduces income tax rates from as high as 40 percent and business taxes from 35 percent down to a flat 14.5 percent rate can only be described as explosively pro-growth and pro-jobs.

“The more expensive it is to start-up or maintain a business, the less of them there will be,” says Del Beccaro. “Today, business failures exceed new business start-ups.”

1. The elimination of our current corporate tax system and to replace it with a 15.5 percent net business income tax with immediate expensing for business purchases and deductibility of wages and salaries.

2. The replacement of the current personal income tax with a flat rate 15.5 percent income tax on wages and salaries, capital gains, dividends, interest income and bequests. For a family of four, the first $48,000 of income is tax-free. Health care benefits should remain untaxed.

3.  The elimination of all deductions except the standard deduction should be doubled.

4.   The payroll tax should be retained but its cap eliminated thereby creating a true flat tax for all earners.

5.   The elimination of the estate tax, ObamaCare taxes, and all existing tariffs. The net business income tax would be applied to imports at the border.

6.  Any change to this system, should require a 3/5ths vote of both houses of Congress.

“Our economy doesn’t need tinkering – we need a course correction,” Del Beccaro added. “A flat tax would provide a huge jolt to the economy.”

“Experts at the Tax Foundation estimate 2 million more jobs and 10 percent more growth over a decade,” Moore recently wrote. “That’s $2 trillion more output every year – which is like adding another California to the economy.”

Imagine what a flat tax could do for California. Ideas are powerful.