After years of intense government and union harassment by the Agricultural Labor Relations Board and the United Farm Workers labor union, Gerawan Farming Inc. notified its workers that effective February 25, 2016, the company will fully close its entire table grape operation, in the County of Fresno. Pursuant to the Federal Worker Adjustment and Retraining Notification Act, known as the WARN Act, Gerawan has been forced into a position of closing an entire arm of its farming operations because of California government assisting a labor union attempt to take over a large company. And Gov. Jerry Brown has not once intervened to stop the unlawful harassment by the union or his own state agency.

The table grape operation closure does not affect any of the employees’ employment in other Gerawan farming operations, but now thousands of farm workers will lose well-paying farm jobs because of California’s corrupt state government. Gerawan always exceeds industry average wages and are the first to increase wages. Gerawan’s website shows their hourly wage for grape packline as $16.27, and upwards of $20.00 per hour.

How Did This Happen? Secrets, Lies and Corruption

The Agricultural Labor Relations Board has become so secretive and extreme that it has been deemed a threat to free speech by free press groups and legal experts.

A look back on the ALRB’s controversial actions this year to disenfranchise Latino farmworkers, finds that the biggest sleeper issue was the support that First Amendment advocates provided to Gerawan Farming, and to laborers opposed to the United Farm Workers union

Governor Jerry Brown’s quiet purge of the ALRB’s Office of General Counsel – after a whistleblower exposed top lawyer Sylvia Torres-Guillén and her team for willfully deceiving the Board – overshadowed the First Amendment issue. Brown sacked Torres-Guillén in June. Farmworkers describe the embattled lawyer as “biased in favor of the union.” 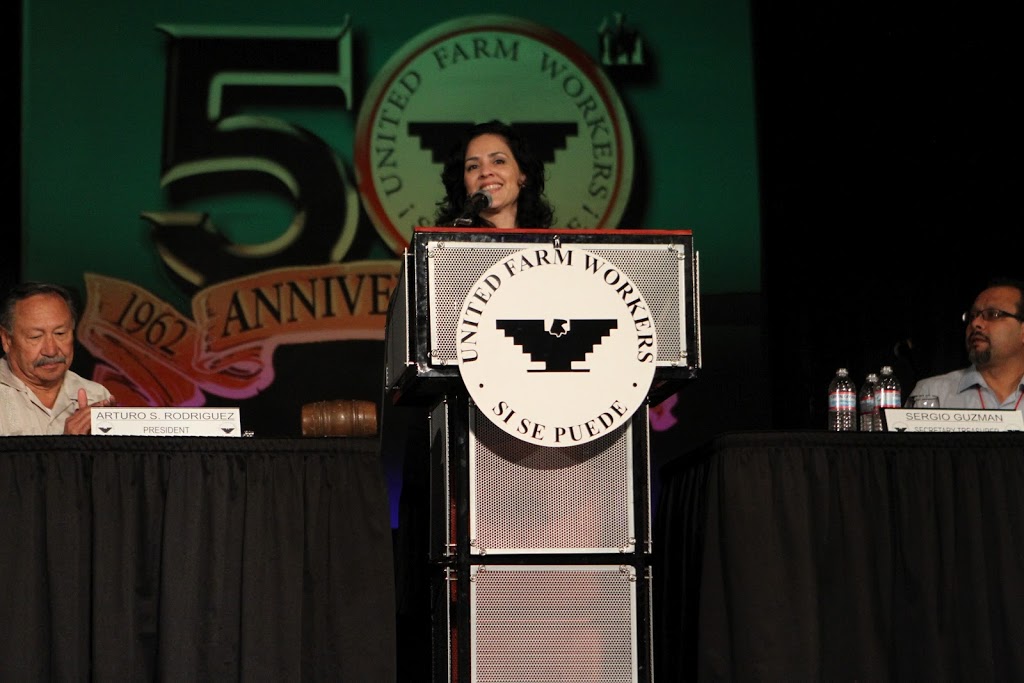 Three major free press groups – the California Newspaper Publishers Association, the Reporters Committee for Freedom of the Press, and the First Amendment Coalition – show that the ALRB’s bias in favor of the union goes far beyond the disgraced Office of General Counsel.

Joining the groups was UCLA Law School Professor Eugene Volokh, recognized as one of the nation’s most prominent free speech scholars.

The three advocacy organizations and Volokh argued in an amici curiae brief before a state court that the ALRB’s exclusion of workers, the press, and the public from attending “on the record” hearings was a threat to freedom of speech.

The groups asked the California Court of Appeal in Fresno to quash an ALRB order to prevent citizens and employees from attending the hearings, which are held as part of the Board’s compulsory contracting process.

At issue is the Mandatory Mediation and Conciliation (MMC) process, which the ALRB conducted in 2013 to attempt to impose terms and conditions of a UFW-backed “contract” between Gerawan Farming, its workers, and the union. The Mandatory Mediation and Conciliation was signed into law by Gov. Gray Davis in 2002. (When such an MMC “contract” is imposed, neither the employer nor employees may opt out, and the employees are not allowed a ratification vote.)

Gerawan farm worker Lupe Garcia, who opposed the ALRB’s plan at the time to prevent him and his colleagues from voting to decertify the UFW as their legal representative, tried to attend the MMC sessions. The ALRB banned Garcia and other members of the public from attending the on-the-record proceedings.

Ultimately, the ALRB allowed the decertification vote to proceed in November, 2013, but the Board’s Office of General Counsel prevented the workers’ votes from being counted. The issue has been tied up in litigation since 2013.

Garcia and the Central Valley fruit grower filed suit to have the ALRB’s ban struck down as unconstitutional. A three-judge panel in the California Court of Appeal for the Fifth District in Fresno unanimously agreed, striking down the MMC statute on May 14, 2015. The ALRB appealed. Gerawan attorney David A. Schwarz said, “The board’s decision to cloak its forced contracting process in secrecy not only violates the rights of farmers and farm workers. It erodes public trust in our government.”

Garcia and Gerawan Farming received the free speech advocates’ support in June, responding to the ALRB’s appeal. The journalists and publishers argued before the court that the secretive ALRB’s “exclusion of the public” from its proceedings “should be held to violate the First Amendment” of the U.S. Constitution.

The ALRB argued that “the public interest . . . is not served by public presence” during the on-the-record portions of what Garcia argued was a “forced contracting process.”

The publishers, reporters, and First Amendment defenders filed an amicus brief to ask the Court to determine that the ALRB’s on-the-record MMC hearings are indeed in the public interest and should be “presumptively open to the public.”

“The public may be understandably suspicious of a closed process that keeps out the people whose rights the process adjudicates,” the groups said in the amicus brief. Courts have long ruled that such proceedings should be open to the public.

What the amicus brief said

In their 22-page amicus brief, the three associations and Professor Volokh argued about why the ALRB’s restriction of public access violated the Constitution.

“MMC proceedings operate like bench trials,” they wrote. “Parties to the proceeding have a right to representation. The mediator hears sworn testimony. Witnesses are cross-examined. Evidence may be excluded. Conclusions are binding and enforced by the judiciary. Findings must be based on evidence that becomes a matter of official public record. MMC proceedings thus share key features with judicial proceedings that have traditionally been open to the public.

“MMC proceedings are also state-imposed and triggered by the findings of an enforcement agency – the California Agricultural Labor Relations Board (ALRB). Thus, in MMC proceedings, the government is exercising its coercive power, acting in its sovereign capacity rather than, say, as employer or educator (areas in which First Amendment constraints on government are often reduced).”

“Opening MMC proceedings to the public,” the California Newspaper Publishers Association and the others argued in the brief, “would help inform the public about how the MMC process operates, as well as about how unions and employers are using the process. Press outlets, both objective and opinionated, would be able to report on the proceedings for the benefit of citizens who cannot attend.”

By closing the MMC proceedings, the ALRB was actually acting against its statutory obligation to serve as an impartial advocate of farmworkers. “Opening the proceedings would likewise help inform the part of the public that is most interested in the subject: farmworkers, who are understandably interested in observing how and why this government process is setting their wages and hours, health insurance benefits, paid time off, and more,” the brief said.

Opening the MMC process would also shine light on the behind-closed-doors work of the unions. “In particular, farmworkers may want to see the quality of union advocacy during the proceeding, discuss it with their fellow workers, and consider this performance in choosing whom to support in future union elections,” the amicus brief continued.

This transparency would also shine more light on the secretive ALRB. “Such a public presence would also enhance the fairness and quality of MMC factfinding, since the very people whose working conditions are being discussed and altered would be present,” the advocates argued in the brief.

“Finally, allowing farmworkers, the public, and the media to be present would enhance the perception that the proceedings are fair,” they added. “The public may be understandably suspicious of a closed process that keeps out the people whose rights the process adjudicates, as well as other Californians whose interests might be indirectly affected by the process.”

Garcia originally filed before a state superior court, which in 2014 rejected the case on the grounds that the law did not allow superior courts to have jurisdiction over challenges to the MMC. He and Gerawan Farming then filed before the state appeal court in Fresno. The case is pending. The briefing is complete, but no date for oral argument has been set.

Currently, the sting is too painful; no one from Gerawan Farming was available to comment.

The letter the employees received only days before Christmas: 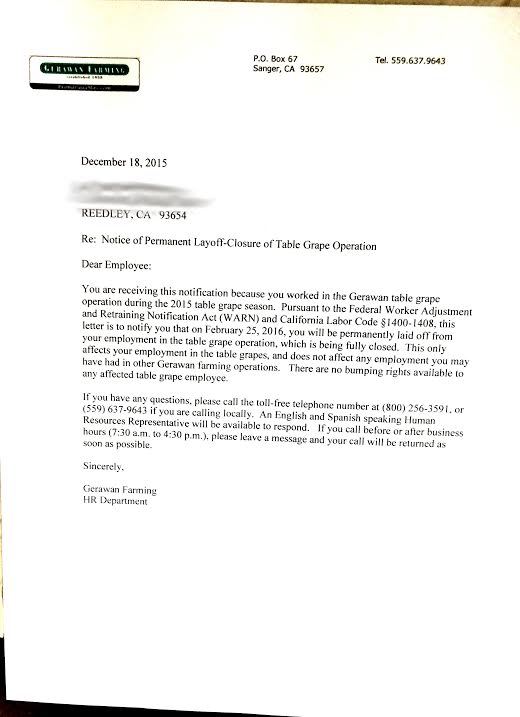 This is part of the letter sent by Gerawan’s attorney, notifying officials: 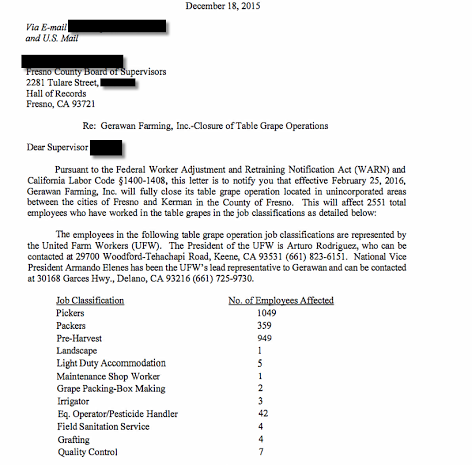