Sacramento grocery shoppers are livid. Even the liberals. 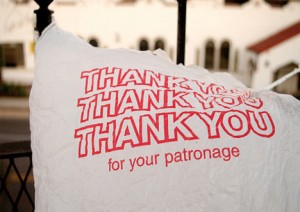 While shopping Jan. 3 at two Sacramento stores, I witnessed mounting shopper anger as they were told they’d be charged .10 cents per grocery bag. One woman screamed back at the checker, “This is ridiculous!” as she tossed all of her items back into the cart on her way out of the store. She then angrily threw the same loose, un-bagged items into her trunk and drove off… with an Obama 2012 bumper sticker.

At another large retailer, most shoppers were also caught off guard, and angrily acquiesced to the bag charges. And they weren’t silent about their anger. “Ten cents for this piece of &*#t?” one woman asked another shopper, holding up a new bag. (No, I wasn’t at WalMart)

Wait until these shoppers discover that California’s coddled welfare recipients won’t be charged for grocery bags. I hope the &*#t hits the fan.

I knew about the impending bag ban and excessive charges because I’ve been writing about this since 2009 – and stashing plastic bags for reuse.

Leftist special interest groups were behind getting rid of paper bags years ago, by claiming paper bags were killing trees. Emotional lefties claimed using plastic shopping bags (a petroleum byproduct) would save the trees and our planet.

But lefties are whimsical, and change their causes as frequently as the weather changes (Global cooling, global warming)

After eight years of failed legislative attempts to ban plastic grocery bags, in September 2014, they finally succeeded. Gov. Jerry Brown signed Senate Bill 270 by then-Senator Alex Padilla, D-Los Angeles, to ban plastic bags at large grocery stores and supermarkets such as Wal-Mart and Target starting in July 2015, and convenience stores and pharmacies in 2016.

Plastic bag manufacturers said the ban amounted to a cash-giveaway to grocers that would lead to a loss of thousands of manufacturing jobs. They said Californians now have a chance to weigh in. “SB270 was never a bill about the environment,” said Lee Califf, executive director of the bag alliance. “It was a back room deal between the grocers and union bosses to scam California consumers out of billions of dollars in bag fees without providing any public benefit.” THat’s exactly what it is.

Immediately after the bill signing, the American Progressive Bag Alliance announced it would gather signatures for a November 2016 ballot initiative to repeal the bill, and to block implementation of the statewide ban. They collected more than 800,000 signatures, required to put the referendum on the ballot in November, 2016.  The state law is currently suspended under the referendum.

The Brain Trust at the Sacramento City Council upped the ante and voted to actually ban plastic and paper bags Jan. 1, 2016, or allow grocers and convenience stores to tax .10 cents each for them. Adding insult to injury, and admitting they know the cost is outrageous, the council allowed participants in the state’s welfare, food stamp, and WIC program (Women, Infant & Children), using a voucher or EBT card, to be exempted from charges for bags.

Every step of the way it’s the taxpayers who are penalized, by costly and outlandish liberal policies like this bag ban and tax.

This new bag ban bill will allow grocers to charge a minimum of .10 cents each for paper and thicker plastic bags, and pocket the money. A fee of .10 per bag does not sound like much but would serve to punish low-income folks, and the working poor, more than others. A cleaner environment is a valuable goal. The question is whether solutions that impose more challenging costs on the working poor, with debatable environment outcomes, are the best way to proceed.

Assemblyman Matthew Harper, R-Huntington Beach, introduced two bills in 2015 to repeal the plastic bag ban. One bill would have repealed California’s ban of plastic grocery bags. The second measure would have repealed the law forcing retailers to charge a 10 cent fee per bag on paper grocery bags. Both of Harper’s measures were killed by the Democratically controlled Assembly National Resources committee.

“The plastic bag ban is not in the best interest of Californians,” Harper said. “The Legislature has no business telling consumers what bag they should use, or telling businesses what bags they can distribute, but that is exactly what has happened.”

“My bill gave the State Legislature a second chance to listen to the voice of the people and they clearly did not,” Harper said.

The legislation ignored the fact that a huge portion of grocery and retail plastic bags are reused as garbage pail liners, pet-waste disposal bags, lunch bags, trash bags, dispose of kitchen grease, dispose of dirty diapers, hold wet clothes, and a myriad of other uses. These secondary uses of plastic grocery bags are beneficial to the environment in that it prevents the manufacture and purchase of another plastic bag.

Plastic bag manufacturers continue to argue that the litter problem is caused by careless people. Enforcing litter laws would go much further to helping the environment.

The American Chemistry Council estimates the bill would amount to a $1 billion tax and threaten 500 jobs in the plastic bag manufacturing business.

A study by the National Center for Policy Analysis found it is better for the environment to reuse plastic bags as garbage pail liners rather than to recycle them because of the environmental “benefits of avoiding the production of the bin liners they replace.” But this is California, where reason and sanity are AWOL. And unlike Lake Wobegon, “where all the women are strong, all the men are good-looking, and all the children are above average,” in California, all the Democrat women are absurd (and hairy), all the liberal men are crybabies, and of the publicly educated children are benighted.