Regardless what a punk Carolina Panthers’ quarterback Cam Newton may or may not be, the ugly news that he will owe $137,900 in taxes — for losing the Super Bowl – shouldn’t be the thanks he gets. 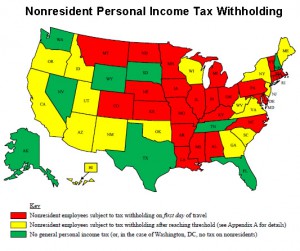 The thanks is courtesy of California’s highest-in-the-nation tax rate of 13.3 percent, known as the “jock tax” – the nonresident income taxes that states and cities enforce on athletes performing in their jurisdictions.

As Kurt Bedenhausen explained in Forbes last week, “Newton will pay California 86.3% of his Super Bowl earnings if the Panthers win. Losing means his effective tax rate will be a whopping 172.2%. Oh yeah, he will also pay the IRS 40.5% on his earnings.” This tax bill is based on Newton’s 2016 earnings of $20 million.

Each member of the Bronco’s winning team will receive a $102,000 check from the NFL, members of the Panthers, the losing team will each receive $51,000 just for participating.

The players are literally charged for being in California for the game. They not just taxed for the income they earn in the days leading up to it, but taxed based on their entire annual salary, bonuses included. When out-of-stater athletes are in California to work, the state charges 9.3 percent of their daily pay while they’re here.

In 1991, when the Los Angeles Lakers lost the NBA finals to the Chicago Bulls, California decided to collect the tax against the income of Michael Jordan and his teammates earned while playing in the state. In a tit-for-tat, angry Illinois lawmakers passed their own tax laws specifically targeting visiting athletes. This came to be known as “Michael Jordan’s revenge.

However, this didn’t really start in 1991. A case in 1976 marked the issuance of one of the first legal decisions concerning state taxation of nonresident professional athletes. But it wasn’t really until late in the 1980’s and early 1990’s when professional athletes hired high-powered entertainment lawyers to negotiate huge contracts.

Commensurately, first California, then other states, and even some cities, began to require nonresident professional athletes to file tax returns of their earnings to the states in which they play games.

Jock taxes require that traveling professionals pay income taxes in every state where they earn income or have an “economic nexus.” Some states have gotten really greedy and extend jock taxes to high-priced musicians, lawyers, and other high-visibility, well-paid performers. Even radio personality Rush Limbaugh is penalized whenever he is in New York, despite that he left years ago.

Professional golfers, NBA players, baseball players, soccer players, and coaches not only pay the top marginal federal and state income tax rates, but also pay the “jock tax” on their earnings per away games – even if they are entry level, low-paid players.

Tax experts say jock taxes represent poor tax policy because they are poorly targeted, arbitrary in their enforcement, and impose an unrealistic administrative burden by forcing traveling professionals to file potentially dozens of state and local income tax returns annually, rather than just in their own state of residence.

Despite the outrageousness of these jock taxes, there is an absence of outrage and outcry from politicians. Instead, last year, Wisconsin Gov. Scott Walker proposed a “jock tax” to help pay off $220 million in government bonds to fund a new basketball arena for the Milwaukee Bucks.

Sacramento has been down this road as well. Rather than lose the Sacramento Kings to Seattle, Mayor Kevin Johnson, a former three-time NBA All-Star, forced a new publicly funded NBA arena deal on city taxpayers, using nearly $300 million in public money that the city does not have. Not only does Sacramento not have the spare $300 million, taxpayers voted against a publicly funded arena proposal only a few years ago. But Johnson did it anyway, rather than letting the Kings move to Seattle, and take their taxable earnings with them.

Americans for Tax Reform explained this in 2013:

Sacramento Kings players have a combined top marginal income tax rate of 56.7 percent: a 39.6 percent federal income tax rate, a 13.3 percent state income tax, and a  3.8 percent Medicare tax – all before paying the “jock tax”, which changes from year to year based on the team’s travel schedule, on the remainder of their salary.

A move to Seattle, Washington, with no state income tax, would see the combined top marginal income tax rate reduced to 43.4 percent. For example, DeMarcus Cousins, the Kings’ leading scorer, would see his $2.2 million tax liability decrease to $1.7 million before paying the jock tax. Simply by relocating the team to Washington, Cousins would see his after-tax pay increase by $515,733.

In 2014 after California voters passed Proposition 30, which retroactively raised tax rates to 13.3 percent from an already high 10.3 percent for those making more than $1 million annually, professional golfer Phil Mickelson said he might move to another state. He also said California’s high taxes were a contributing factor to his departure from an investment group acquiring the San Diego Padres.