GOLDEN FLEECE AWARDs are bestowed upon public officials, governmental agencies and organizations for their “wasteful, ridiculous, or ironic use of taxpayers’ money.” The SacTax FLEECE AWARD went to the entire Board of Directors of Sacramento Regional Transit, for raising bus and light rail fares to the highest level in California, after first proposing the highest fares in the entire nation. RT managers have defended the rate increases because of RT’s of growing deficits, and declining ridership – so they want to increase the fares. Such brilliance is only evident in politics, where politicians respond not to market forces, but instead to political forces. (see below for RT Board)

What business that few people want raises its prices?

RT board also said they risk losing state funding because the subsidy per ticket is so high, each rider’s fare currently contributes only about 21 percent to the cost of his or her trip. The state requires that rate to be at least 23 percent. Perhaps all of the state government employees currently enjoying the 75 percent discounted fares could pay the full fare, since they are actually working at well-paying jobs and have overly generous benefits.

The Regional Transit board also pushed for a bailout through voter approval of a doubling of the current ½% Measure A county-wide, transportation sales tax, a proposal that’s likely to be on the November ballot. They want more money, rather than taking the fiscally prudent steps to rein in RT’s escalating operating costs.

As Eye on Sacramento pointed out in a recent report on RT, this is fundamentally a false choice between huge fare hikes, which could trigger a transit death spiral, on the one hand, and doing nothing to address RT’s very real financial crisis, which will lead to bankruptcy. 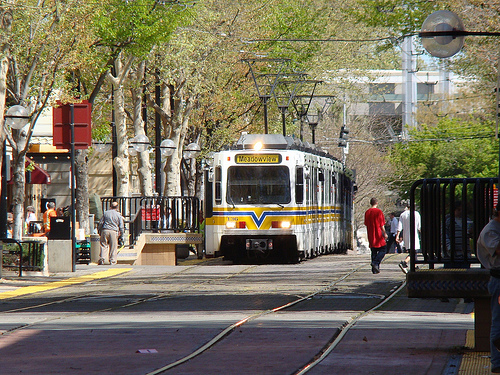 “Sacramento’s overall score – which looks at access to jobs, frequency of service and connectivity – ranks No. 27 out of 68 California cities with a population of more than 100,000, ahead of San Diego and San Jose,” Sacramento Bee Associate Editor Foon Rhee wrote.

The study they cite is by liberal “sustainability” group Center for Neighborhood Technology and TransitCenter, of Chicago, funded by activist liberal foundations.

“Sacramento Transportation Authority board looked at two financing plans, one that would give 29 percent of the sales tax revenue to RT and other regional transit expansions and operations, another that would set aside only 21 percent,” Rhee wrote. “The board couldn’t decide, so it plans to vote Thursday on a compromise endorsed this week by a subcommittee that would aim 26 percent to regional transit systems.”

Rhee takes it one step further and advocates for “consolidating” (government takeover) of all transit systems in the region – because RT is doing such a great job?

The commuter buses which travel from Elk Grove and Galt, El Dorado, Placer, Yolo and Yuba counties into downtown Sacramento, are a far more efficient use of transit, because they are using buses instead of trains.

“I get the politics and desire for local control, but it’s never made much sense to me why we need all these different transit providers,” Rhee said. “There has to be at least some efficiency and savings from consolidating.”

What Rhee is proposing is just a larger mismanagement, larger fiscal irresponsibility and a larger Regional Transit bankruptcy, as well as spoiling the services from outlying areas.

Rhee should have instead asked for a ranking based on the size of the deficit and how much money light rail systems lose every year.

Why would taxpayers want to give Regional Transit one more penny when they’ve mismanaged and squandered the resources they already receive? More public spending for Regional Transit will likely result in little to no improvements for riders, but will swell transportation deficits and waste tax revenues.

RT’s current financial mess is of their own making: Their “premature and reckless expansion of light rail lines and extensions which have saddled RT with $4 million of annual debt payments and about $7 million of additional annual operating costs, despite an early warning from the federal government that RT might not be able to afford to operate its light rail extension,” EOS found. “A secondary cause has been RT’s failure to gain control over its staffing decisions under in its labor contracts with its unions. Failure to control its compensation and benefit costs has also played a role.”

RT needs to take immediate and focused action to reduce its growing operating costs without substantial cuts to RT service levels. It is this “third way” which is the focus of EOS’s report, which identifies dozens of opportunities for RT to reduce its costs – so long as both the RT board and its management marshal the political will to take advantage of them. Any other road forward (record-setting rate hikes or doing nothing) would put RT on a glide path to likely disaster.

Eye on Sacramento has proposed numerous ways in which RT can close its deficits by cutting costs without significant cuts to service levels:

  Don’t build the proposed streetcar which will saddle RT with $5- 8 million in  net annual operating costs, or about $180 million in new costs over 30 years

  If the streetcar is built, insulate RT from cost liabilities by insisting that participating cities and property owners pick up the tab for operating it

There is also an opportunity to outsource all electrical maintenance and repairs to SMUD, at tremendous savings.

Regional Transit was a successful public transit system before it decimated the bus lines with Light Rail, and intersected major artery streets with rail tracks. “They should consider that proven, affordable rapid transit is available in the form of Bus Rapid Transit (BRT) for a fraction of the cost of light rail,” the NCPA reports. “BRT allows buses to operate more like a rail system, using separate highway lanes. Best of all, because its capital costs can be partially offset by automobile user fees, it could actually be built now, without raising taxes or waiting decades for funding to appear.”

It is important to also note that SacTax awarded the Sacramento City Council 2nd Runner Up and STA’s ANNUAL HUBRIS AWARD for blatantly ignoring the clear will of city voters who soundly rejected a tax assessment in Downtown/Midtown to pay for a circulating streetcar system by a vote of 56% “NO” to 46% “YES” (the special tax required a 2/3rds “YES” vote to pass).   The City didn’t miss a beat in pursuing a “Plan B” strategy to build the streetcar project anyway.

Katy Grimes is the President of the Sacramento Taxpayers Association