Immediately following the weekend terror attack on an Orlando gay bar, anti-gun ghouls, including President Barack Obama and Democratic Presidential nominee Hillary Clinton, used the attack to demand even more gun control – without ever acknowledging that the gunman was a radicalized Islamic terrorist. 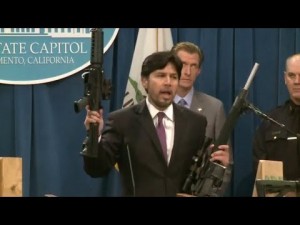 Guns don’t kill people. Crazy people kill people. And SUV’s don’t run over people in a crosswalk. We are a dysfunctional society run by demented liberals who claim they want everyone to live together, freely – except those of us who are responsible, law-abiding citizens. The controlling laws are directed at us.

Gun control and anti-gun laws only serve to weaken citizens, while terrorists, gangs and crazy people collect illegal arms. But a liberal, tyrannical government wants its citizenry to live in fear. What better way than preventing citizens from protecting themselves than gun control?

Firearms-related deaths have fallen dramatically over the years, according to a 2013 U.S. Justice Department report. Gun violence is not a problem of gun supply by legal owners, but rather the result of abhorrent, detestable behavior of criminals, the insane, and the inexplicable Islamic radical terrorists.

Clinton immediately called for more gun control, claiming the U.S. needs to keep guns “like the ones used last night” out of the hands of criminals. “This is the deadliest mass shooting in the history of the United States, and it reminds us once more that weapons of war have no place on our streets,” Clinton said.

And Clinton and Obama refused to call the brutal murders of 50 people “Islamic terrorism.” Republican Presidential nominee Donald Trump immediately responded, saying that unless they are willing to say the words “Islamic terrorism,” the president should resign and Hillary Clinton should quit the race.

ACLU lawyers also opportunistically weighed in on the fresh debate, blaming the Christian Right. “You know what is gross — your thoughts and prayers and Islamophobia after you created this anti-queer climate,” ACLU attorney Chase Strangio tweeted Sunday morning.

Meanwhile, despite the failure of California’s strict gun control laws to prevent the San Bernardino massacre, the California Senate passed another 11 anti-gun bills in late May. The State is deciding whether 15 or 10 bullets in a clip is or is not criminal with a bill to allow for confiscation of formerly grandfathered magazines capable of holding more than 10 bullets. Another proposed bill would require background checks for ammo purchases. There is even a bill to limit your ability to lend guns to family members.

“The now deadliest shooting in U.S. history reminds us why California has to get it absolutely right as we work to prevent gun violence,” Senate President Kevin de Leon said in a press statement Monday. De Leon is the author of some of the most inane gun control laws, and recent proposed legislation. De Leon is notorious for his bill to paint all BB guns in California bright colors so they wouldn’t be mistaken for real guns.

Gun Control Does Not Work

Gun control does not work – unless the goal is controlling law-abiding citizens — something entirely different from “public safety.”

“The shooting, committed by Omar Mateen, is thought to be the largest mass-shooting in United States history,” the Daily Caller reported.

In Switzerland where gun ownership is high, crime is low. With compulsory military service for all 18-year old Swiss males, the militia is virtually synonymous with the nation. “The Swiss do not have an army, they are the army, says one government publication. Every male citizen under 50 years old is a reserve soldier.

Brits often point out how little the removal of legal pistols reduced armed crime in the UK because of the criminals still have guns. In any major city it is relatively easy to buy an illegal weapon in a low-life bar.

The recent terrorist massacre in Paris showed that gun-free zones are a total failure, and the police cannot protect the citizens. Terrorists and criminals don’t care about violating gun laws.

And despite gun control advocates’ ad nauseam claims that eliminating guns entirely from society, except for police, is for public safety, how is it that ISIS terrorists in Paris, and Islamic terrorists in San Bernardino, and now Orlando, used guns to massacre all those people?

History shows in European countries, that when the citizenry has been disarmed, and faced with a tyrannical regime within their own government, they can only obey the commands of the tyrannical government monsters, or be killed by military and police. Americans have always had another the ability to fight back and resist the tyranny, should this ever become the issue. And this issue is becoming more and more prevalent with this administration, and the Clinton third term, should it come to pass.

Most importantly, only dictators, tyrants and totalitarians want to control so severely to prevent gun owners from being able to defend ourselves. “The strongest reason for the people to keep and bear arms is, as a last resort, to protect themselves against tyranny in government;” Thomas Jefferson’s famous quote means more today than ever.