If there is any doubt that this Democrat-controlled Legislature is on a spending rampage, take a look at the legislation below currently blowing through the Assembly and Senate. 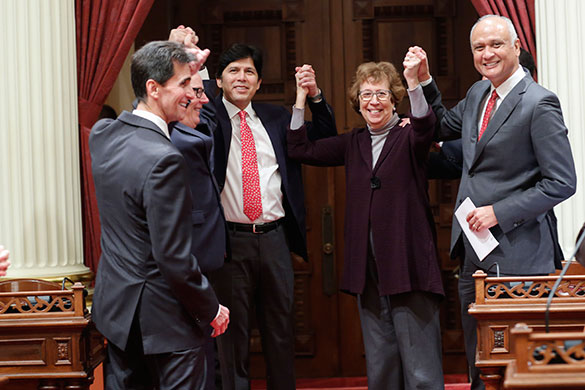 AB 1770 (Asm. Luis Alejo) makes non-citizens who are in the U.S. legally eligible for the California Food Assistance Program.  AB 1770 is on suspense.

AB 1809 (Asm. Patty Lopez) eliminates the consideration of an individual’s assets as a condition of eligibility for CalWORKS. AB 1809 is currently being held in a committee.

SB 1010 (Sen. Ed Hernández) requires health plans and insurers to report information about prescription drug pricing to the State.  Requires Department of Managed Health Care and Department of Insurance DOI to compile a report regarding the overall impact of drug costs on health care pricing.

AB 492 (Asm Lorena Gonzalez) provides an additional $50 per month to CalWORKS recipients for diapers for children under 2 years old.

SB 1465 (Sen. Pres. Kevin De León) allows the Governor to sign agreements making Los Angeles the host of the 2024 Olympic Games, including an agreement for joint liability. Los Angeles is already bankrupt; this will just pile on.

AB 1306 (Asm. Autumn Burke) removes the physician supervision requirement for certified nurse midwives, allowing them to manage a full range of primary health services and to provide emergency care when a physician is not present.  Another way to allow non-doctors to perform abortions. This was removed from the original bill: This bill would prohibit corporations and other artificial legal entities from having professional rights, privileges, or powers under the act, except as specified. The bill would authorize specified entities to employ a certified nurse-midwife and charge for professional services rendered by that certified nurse-midwife, as provided. This bill requires a third reading.

The Only Good Democrat Bill

SB 443 (Sen. Holly Mitchell) prohibits California law enforcement from receiving federal drug asset forfeiture funds in the context of a joint investigation unless a conviction is obtained.  This bill finally passed – it should have long ago.

Stringing The Global Warming Lie Along

AB 197 (Asm. Eduardo Garcia) This is the sister bill to SB 32. It expands the size of the California Air Resources Board and directs it to prioritize greenhouse gas emission reductions from stationary sources and transportation. Requires CARB to rank efforts to reduce emissions by quality and costs.  This bill is pending.

SB 32 (Sen. Fran Pavley) expands AB 32, California’s Global Warming Solutions Act, to require CARB to develop regulations that reduce statewide greenhouse gas emissions to 40 percent below 1990 levels by 2030 instead of just reducing greenhouse gas to 1990 levels. This is how to keep CARB in business. This bill passed.

SB 552 (Sen. Lois Wolk) allows the State Water Resources Control Board to appoint an independent administrator to run the day-to-day operations of a water system if SWRCB determines that the system consistently fails to provide safe and affordable drinking water.  Opposition says the State Water Board does not have subject-matter expertise in Cortese-KnoxHertzberg local government law or staff steeped in local agency organization. There is a lack of specificity in the bill relating to funding of the required administrative services and whether the administrator would be subject to Proposition 218.

This is truly hypocrisy when the city of East Porterville in Tulare County has had tens of thousands of poor and low-income residents go without drinking water for the last five years due to drought, and exacerbated by lack of infrastructure, and dry and contaminated wells.

Last year, Assemblyman Devon Mathis introduced AB 954 which would have provided $10million to homeowners (not farmers) to dig deeper wells and clean contaminated ones.

It passed through the Assembly and a state Senate committee without opposition and the Governor was looking forward to signing it, only to have Senate Appropriations Chairman Lara put it on suspense, killing it, depriving 10,000+ low-income individuals access to running water. Sen. Lara was playing politics with this Republican bill, despite the 10,000 poor people who need the water.

Matthis negotiated through the winter to do get it to pass this year and as a result, introduced AB-1588 which expanded access to the funds to not only homeowners but renters too.

Never let the thirst of poor people get in the way of a vile, vindictive Democrat politician.

SB 450 (Sen. Ben Allen) allows a county to conduct all-mail elections for any office, and allows anyone to collect and return vote by mail ballots.  The only legitimate ballot is one you fill out by hand, and deliver in person.  This ridiculous bill passed.

SB 1094 (Sen. Ed Hernández) requires initiative proponents to obtain 10 percent of all petition signatures from non-paid, volunteer circulators, unless the proponent is a union or non-profit organization. Why? Apparently this notice makes it all legit: “NOTICE TO THE PUBLIC: THIS PETITION IS BEING CIRCULATED BY A VOLUNTEER OR AN EMPLOYEE OF A NONPROFIT ORGANIZATION. YOU ARE ENCOURAGED TO READ THE CONTENTS OF THIS PETITION BEFORE SIGNING.” It passed.

SB 1298 (Sen. Bob Hertzberg) According to the Howard Jarvis Taxpayers Association, SB 1298 seeks to undermine Proposition 218’s requirement that storm water assessments must be approved by property owners via a mailed ballot election.  Hertzberg’s legislation would make it easier to raise your property taxes. Also alters several terms in Proposition 26 (2010).   Awaiting a vote in the Assembly.

AB 1084 (Asm. Susan Bonilla) prohibits charter schools from being operated by or contracting with for-profit entities.  It is pending and has been gutted. 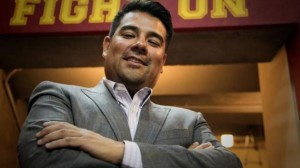 SB 1146 (Sen. Ricardo Lara) would eliminate the religious liberty of all California faith-based universities. Lara’s bill requires religious colleges and universities that receive state financial assistance or that enroll students who receive CalGrants to comply with the anti-discrimination laws that apply to state-related programs. Lara, an openly gay activist, claims religious universities practice discrimination against LGBTQQIP2SAA. “All students deserve to feel safe in institutions of higher education, regardless of whether they are public or private,” Lara said in a statement in April. And the media reporting on this bill have been atrocious. A recent CalWatchdog story characterized opponent California MassResistance as “aims to limit the LGBT movement and organized the protests,” rather than “pro-family, that educates people to help them confront the attacks on the traditional family, children, religion, and society,” as their website explains.

Fortunately, the outcry over SB 1146 was so vast, Senator Lara amended SB 1146 to exclude provisions that threaten religious freedoms and keep Cal Grant students from choosing Christian schools. But be prepared – he will just come back next year with more legislation to get this passed.

AB 1732 (Asm. Phil Ting) require all single-user toilet facilities in any business establishment, place of public accommodation, or government agency to be identified as all-gender toilet facilities, and would authorize inspectors, building officials, or other local officials responsible for code enforcement to inspect for compliance with these provisions during any inspection.

AB 1887 (Asm. Evan Low) bans state-funded travel to states that pass laws deemed to discriminate on the basis of sexual orientation or gender identity (like every other state in the country?)

AB 2844 (Bloom) requires bidders on state contracts of $100,000 or more to certify that any policy that they have adopted against a nation recognized by the United States, including the nation of Israel, is not used as a pretext for discrimination in violation of the Unruh Civil Rights Act or the California Fair Employment and Housing Act. This is the bill the Democrats hijacked from Assemblyman Travis Allen, and then they watered it down, taking all meaning out of it. Allen’s bill would have forbid all state agencies in California from contracting with companies “engaging in boycotts based on race, color, religion, gender or nationality,” in support of California’s long history of trading with Israel.

SB 1166 (Sen. Hannah Beth Jackson) requires employers with at least 10 employees to provide 12 weeks of protected parental leave. This bill is identified as a “Job Killer” by the California Chamber of Commerce.  Fortunately this bill failed to even pass in the committee process. Yeah, it’s that dumb.

AB 2243 (Asm. Jim Wood) imposes a tax on medical marijuana. Revenue from the tax would be divided between law enforcement, the Natural Resources Agency, government agencies, Department of Justice, and Department of Conservation.  According to Wood, AB 2243 would levy a $9.25 per ounce tax on cannabis flowers, a $2.75 per ounce tax on cannabis leaves and a $1.25 tax on immature cannabis plants from nurseries.  And funding goes to “the most impacted communities.”

Projected to raise nearly $80 million annually; funds will be distributed in the following areas: