Mayors of Sanctuary Cities Who Flaunt Federal Law Should Be Arrested

The United States is either a nation of people ruled by laws and Constitution, or we are a nation ruled by ideological tyrants. One example of this is the illegal protecting by “Sanctuary cities” of convicted criminals. 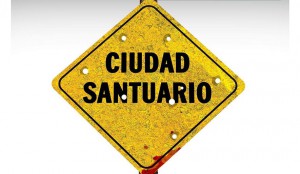 “It is time to start locking up local officials like Chicago mayor Rahm Emanuel for interfering with the enforcement of federal immigration law,” Matthew Vadum of Canada Free Press recently wrote.

Notably, the Department of Justice’s Inspector General published a memorandum in July finding that the practices of sanctuary jurisdictions violate federal law.

The DOJ Inspector General announced this finding despite the Obama Administrations’ emboldening sanctuary cities and counties by not legally pursuing such cities, which refuse to enforce or comply with federal immigration laws. The Obama administration’s lack of immigration enforcement has contributed greatly to this blatant lawlessness.

Remember that the Obama Justice Department filed a lawsuit in 2010 challenging the constitutionality of Arizona’s law targeting illegal aliens, despite that 70% of Arizona voters supported the law.

But the DOJ report was held back for two months before being published – released only a day after Senate Democrats killed a bill written in response to Kate Steinle’s murder in San Francisco by a criminal illegal alien, deported and released more than five times by the San Francisco sheriff’s department. Because of San Francisco’s pro-illegal alien sanctuary city policy, the Sheriff refused to honor a detainer request for the illegal alien issued by U.S. Immigration and Customs Enforcement, the Daily Caller reported.

In 2012, a California ballot initiative titled the California Opportunity and Prosperity Act, failed to get enough signatures to quality for the November ballot.

Then-Assemblyman Felipe Fuentes, together with then-CA-Senate President Pro Tem Darrell Steinberg, both Democrats, revived the attempt. In one of the most repugnant moves legislators can make, they gutted and amended SB 901, breathing new life into creating a “safe harbor” for illegal immigrants in California, I wrote at CalWatchdog in 2012. The sanctuary discussions began with allowing counties to opt in or out of becoming sanctuary counties. But when SB 901 was gutted and amended to include the new language, Steinberg used language that would make the entire state a sanctuary state.

Current law requires local law enforcement agencies to submit arrestees’ fingerprints to ICE, as well as several other Federal Bureau of Investigation databases, and then have these federal agencies access the arrestee’s documented criminal and immigration history.

But according to Ammiano, because the federal immigration program allows local police agencies to investigate and enforce immigration laws on anyone in the U.S. illegally, instead of just pursuing and arresting the most dangerous illegal immigrants, it was too problematic for his liberal California.

Picking and choosing which lawbreakers get deported is apparently what California Democrats want California law enforcement to be able to do. Fortunately, Sen. Steinberg’s Sanctuary State bill, SB 901 died a timely death, and Assemblyman Ammiano’s AB 1081 was vetoed by the Governor.

Now Sacramento Mayor-elect Darrell Steinberg has vowed to fight any and all federal attempts to deport undocumented immigrants under incoming president Donald Trump. Steinberg didn’t get his way back in 2012, and will now use his Mayoral bully pulpit to continue selfishly picking and choosing which laws he follows.

I agree with Matthew Vadum: It is time to start arresting and locking up local officials like Sacramento Mayor-elect Darrell Steinberg for interfering with the enforcement of federal immigration law. Those who, like Chicago Mayor Emanuel and Mayor-elect Darrell Steinberg enable lawless so-called sanctuary cities deserve to be behind bars. They are traitors. “Actively interfering with immigration enforcement could constitute obstruction of justice, another lawyer said in an interview,” Vadum said. “Moreover, the federal Racketeer Influenced and Corrupt Organizations (RICO) Act contains provisions making it unlawful to “harbor” an illegal alien.”

By taking this illegal stance on Sanctuary Cities, Chicago Mayor Rahm Emmanuel and Sacramento Mayor-elect Darrell Steinberg, who clearly see themselves above the law, are favoring criminal illegal aliens over the safety of law-abiding citizens, and should pay the ultimate price for not upholding the laws of the nation.