California Democrat Vows to ‘Fight in the Streets’ Over Illegal Immigration 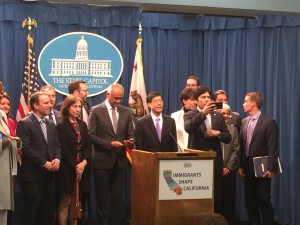 de Leon taking a selfie with colleagues at press conference

California is home to the largest illegal-alien population in the country, with 35 sanctuary cities. President-elect Trump has vowed to build a border wall and deport immigrants that have a criminal record, which he estimates to be two-three million.

Less than four weeks after California voters passed a new transparency ballot initiative requiring advanced notice of legislation of at least 72 hours, Democrat lawmakers rammed through two resolutions hours after turning them in. And these aren’t any resolutions – both demand that President-Elect Donald Trump withdraw “a mass deportation strategy” of illegal immigrants.

The hitch is Trump never said he was going to employ a mass-deportation process; Trump said he would deport criminal illegal aliens.

But, as Chicago Mayor Rahm Emanuel said when he worked as White House Chief of Staff for President Barack Obama, “You never let a serious crisis go to waste. And what I mean by that it’s an opportunity to do things you think you could not do before.”

California Senate President Kevin De Leon essentially ordered President-elect Trump to not deport illegal immigrants to their home countries, “under any circumstances”… But he was pressed by a reporter about Trump’s actual statements regarding the deportation of only criminal illegal aliens. “I’m not sure I heard it that way,” de Leon said. “I based it (resolution) on the 60 minutes interview, and 3 million criminal immigrants. We don’t know if that’s a pretense to loosen up the criteria with mothers, nannies and dreamers,” he said. “If it’s felons, we’ve never had a problem with felons. There’s never been an issue with that.”

“I didn’t hear him make the comment,” he added. Apparently the California Senate is basing state policy on a 60 Minutes interview.

Sen. Ricardo Lara, D-Los Angeles, ratcheted up the rhetoric by threatening to “fight in the streets” anyone who tried to “dissolve the work we have done.”

Senator Joel Anderson, R-Alpine, pleaded with de Leon on the Senate floor to temporarily withdraw his motion in order to allow Senate Republicans to work with Democrats to craft a bipartisan resolution that more accurately represented all members of the Senate, but de Leon rebuffed him and called for the vote, despite repeated claims that he wants “to work together.”

According to de Leon, and Sen. Ricardo Lara, “Thousands of illegal aliens in California are terrified.” However, De Leon and Lara failed to fairly report is how their official media blasts are more likely terrifying immigrant groups.

De Leon said that throughout the election, the President-elect made many disturbing comments. “I am guided by principles of justice. There is no greater policy area than immigration,” he added at the press conference. De Leon said Trumps “heated rhetoric” has families living in fear. “School children are living in fear and experiencing discrimination,” and added that they could come home from school to find mommy has been deported.

De Leon even referred to President Eisenhower’s 1954 “Operation Wetback,” which every liberal media outlet has compared to Trump’s immigration stance. Eisenhower’s program deported nearly 1 million illegal immigrants. “Fathers left for work in the morning never to be seen again by their children,” de Leon said. It was designed to create fear in the 1950s. California will not return to those dark days.” 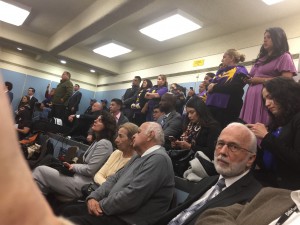 Both resolutions, and the subsequent dog-and-pony-show at the credentialed-press-only conference, which was packed in by purple t-shirt-wearing SEIU members, never recognized that providing education, health care, law enforcement, and social and government services to illegal aliens and their dependents costs Californians $25.3 billion per year, according to a 2014 study released by the Federation for American Immigration Reform.

“California has long set an example for other states to follow. And California will defend its people and our progress,” de León and Assembly Speaker Anthony Rendon said in a joint statement immediately following the election. “We are not going to allow one election to reverse generations of progress at the height of our historic diversity, scientific advancement, economic output, and sense of global responsibility.”

At the press conference Monday, Rendon said they are going to do “whatever it takes to be prepared because of the uncertainty of what the administration will do.” And then Rendon claimed “Immigrants pay taxes, sometimes more than millionaires.”

De Leon said California hasn’t seen such policy “not since Gov. Pete Wilson and his mean spirited Proposition 187, and added that “the President-elect threatens the economic well being of the state. Immigrants pay more in taxes. “

As for “bigoted rhetoric, it all appears to be coming from California Democrats. Assemblyman Marc Levine, D-Marin County, released this statement in response to President-elect Donald Trump’s announcement of the appointment of Steve Bannon as his chief strategist:

“A national immigration policy staked in deporting millions of Latinos has a name.  Ethnic cleansing.  Six months ago I saw Trump for the xenophobe he truly is and introduced two resolutions condemning Trump’s racist and discriminatory immigration policies.  I took Trump seriously 180 days ago when I introduced these resolutions because I took his words at face value,” said Levine.  “With Trump’s appointment of Steve Bannon he has moved with deliberate speed to implement an agenda of ethnic cleansing through deportation.  We must reject a propaganda minister inside the White House masterminding ethnic cleansing in America.” 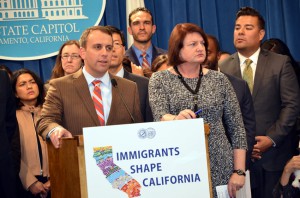 Beyond the legalities, illegal immigrants are a severe economic drain on California’s already strained budget costing California taxpayers more than $25 billion in services.

Trump has also promised to “immediately terminate” the 4-year-old Deferred Action for Childhood Arrivals program created by President Obama through executive order, which amounts to a fast track to permanent amnesty.

The DACA program currently protects nearly 800,000 young people, half of them Californians.

Both HR4 and SR7 will be immediately sent to President-Elect Trump by California Democrats.

You can watch the video of the Senate floor session HERE: http://www.calchannel.com/video-on-demand/