The violent thugs who disrupted Rep. Tom McClintock’s recent town hall meeting in Roseville, CA were clearly organized and had a plan. There was nothing organic about that town hall riot, or any of the other town hall meetings held by Congressional Republicans around the country, ending in violent protests. 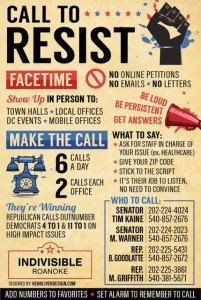 “From California to Florida, liberal activists are bringing the fight to the doorsteps of GOP lawmakers, marching on the streets of their hometowns and making legislators’ lives miserable as they attend meetings and town halls with constituents,” The Hill recently wrote. “Hundreds of protesters lined the streets of downtown Janesville, Wis., on Saturday — just blocks from the home of Speaker Paul Ryan (R) — to protest President Trump’s executive order on immigration.”

There is a playbook for this: It’s called Indivisible: A practical guide for resisting the Trump Agenda.Written by former congressional staffers who watched the rise of the Tea Party, they have launched an aggressive assault promoting a radical progressive agenda intent on crushing the Trump Administration and the United States of America.

‏@RoguePOTUSStaff  “The unofficial resistance team inside the White House. We pull back the curtain to expose the real workings inside this disastrous, frightening Administration.”

And, Indivisible Guide ‏@IndivisibleTeam   tweeted, “Mitch McConnell and Donald Trump are trying to steal a seat on the Supreme Court. Don’t let them.”

Indivisible LA ‏@indivisible_la   posted this: “Reminder: @RepKarenBass is hosting a meeting at 10am on resisting Trump agenda.”

Unable to cope with losing the Presidential election, Marxist tactics have been deployed to tear down our constitutional form of government, as well as the principles and values comprising our foundation.

Obama and his thugs are now operating and recruiting on social media, attempting to asphyxiate the Trump Administration, and Republicans in Congress.

A campaign of this magnitude takes a great deal of money – at the levels seen during the presidential campaign, spent to organize, protest and oppose Trump.

“Leaders of the organization have loose ties to George Soros, the billionaire hedge fund manager who bankrolls liberal causes, according to the Capital Research Center, a conservative think tank that investigates nonprofits,” The Daily Signal recently wrote. While Indivisible has denied this, Matthew Vadum, senior vice president at the Capital Research Center, found otherwise. “Indivisible is ultraslick leftist astroturf activism at its finest,” Vadum told The Daily Signal in an email. “At least three of the group’s five principals—Ezra Levin, Leah Greenberg, and Angel Padilla—have ties to organizations funded by George Soros. Indivisible is apparently not yet a nonprofit, but plans are in the works to register it as a nonprofit.”

‘I’M SHOCKED,” said no one ever. Of course Soros is footing the bill to pay these rent-a-mobs to show up with professionally printed “RESIST” signs, as they did during the Presidential campaign.  And the former President of the United States is helping with 250 OFA offices set-up across the country, staffed with 32,000 organizers, and 25,000 actively training anarchists, preparing to bring civil disruption, destruction, and economic chaos to a Republican district near you.

“’Indivisible,’ advises protesters to go into halls quietly so as not to raise alarms, and ‘grab seats at the front of the room but do not all sit together,’ the New York Post reported. “Rather, spread out in pairs to make it seem like the whole room opposes the Republican host’s positions. ‘This will help reinforce the impression of broad consensus.’ It also urges them to ask “hostile” questions — while keeping ‘a firm hold on the mic’ — and loudly boo the GOP politician if he isn’t ‘giving you real answers.’”

“Separately, OFA, which is run by ex-Obama officials and staffers, plans to stage 400 rallies across 42 states this year to attack Trump and Republicans over ObamaCare’s repeal,” The Post reported. “Added the ex-president: “I promise you that next year Michelle and I are going to be right there with you, and the clouds are going to start parting, and we’re going to be busy. I’ve got all kinds of thoughts and ideas about it, but this isn’t the best time to share them.”

The U.S. Constitution must be enforced and stop the political insurgency and guerrilla warfare activities bent on the destruction of duly elected public office holders.  If not, the U.S. will have become just another Third World hell hole.