As the California Legislature voted Monday to extend the corrupt Cap and Trade taxing and regulatory program by 10 years, eight turncoat Republican legislators voted with the Democrats. They received support from the California Chamber of Commerce, the California Manufacturing and Technology Association, along with several other big biz groups. But they didn’t just reach across the aisle and vote with compadres – Republicans provided cover for three Assembly Democrats in targeted seats who couldn’t or wouldn’t vote for the cap and trade extension. 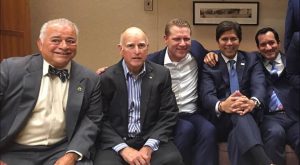 That’s how phony this deal is. Think about this: there are three Democrats who are in targeted Assembly seats, so they didn’t think voting in favor of extending cap and trade would sit well with their constituents.  They didn’t have any real system of ideas and ideals that forms the basis of economic or political theory and policy. They are just counting votes.

What the Hell is Cap and Trade?

The Air Resources Board issues carbon allowances, and businesses are forced to buy or sell these in the open market. Several other countries including Spain and Australia have already acknowledged carbon taxing does not work, but not California’s Air Resources Board, and Democrats. Instead they continue to push for more stringent regulations and taxes on California businesses and taxpayers, and lie that the goal is a reduction in greenhouse gasses. This is just another sizable tax on businesses. And instead of actually reducing carbon emissions through the cap and trade program, a business can merely purchase the get-out-of-jail credits to be able to continue polluting.

The state effectively said: Forget carbon emissions, we need the money. This legislation which originated in 2006 as AB 32, California’s Global Warming Solutions Act of 2006, was financially motivated.

The California Air Resources Board is a state agency completely out of control. With no oversight by the Legislature, as the California Constitution calls for, Mary Nichols, ARB Chairman, is setting policy on behalf of this regulatory body, for the entire state.

While Republican lawmakers frequently talk about how many businesses are leaving the state or closing due to the state’s overarching regulatory environment, it’s no longer an argument; that’s exactly what the ARB and environmental extremists behind the plan want to happen.

“Without a large reduction in the carbon dioxide emissions from both China and India—not just a commitment but an actual reduction—there will be nothing climatologically gained from any restrictions on U.S. emissions, regardless whether they come about from the Waxman-Markey bill [in the U.S. Congress] (or other cap-and-trade proposals), from a direct carbon tax, or through some EPA regulationism,” a research paper by Chip Knappenberger found. ”This is something that should be common knowledge. But it is kept carefully guarded.”

Zero carbon emissions from the United States will have no impact on future temperatures, which also applies equally to CARB’s cap and trade, and AB 32.

The ARB has taken a great deal of liberty, particularly with its interpretation of AB 32. The ARB devised the cap-and-trade system whereby it holds a quarterly auction program requiring selected California employers to bid significant amounts of money for the privilege of continuing to pollute — or be faced with closing their doors.

AB 32 required the state to lower greenhouse gas emissions to 1990 levels by 2020.  The politicians and green lobbies told voters this energy tax would create jobs—the same fairy tale many in California are repeating today.

California was already on track to continue improving air quality prior to AB 32 through the use of more natural gas, and with technologically advancements in cars and industries.

The “cap-and-trade” program that has shifted $4.42 billion from the private sector to the government since mid-2012, Jon Fleischman wrote Tuesday in Breitbart CA. “Big businesses can handle navigating a cap-and-trade system, and largely pass along the costs to consumers. The small- and medium-sized businesses suffer the most, and of course taxpayers in general.”

At the pump Californians are currently paying the highest gas taxes in the country courtest of SB 1 and cap and trade: a 12 cent gas tax will raise $52 billion for Jerry Brown’s corrupt government in 10 years, and a 63 cent cap and trade tax is expected to raise $273 billion in 10 years. It’s not about reducing pollution – it’s all about the money:

In 2012, I broke a huge corruption story about how the California Air Resources Board set up a Delaware LLC to evade open-government laws in its management of cap and trade, and hide billions of dollars in Cap and Trade revenue, and allow the ARB to conduct state business without any of that pesky transparency stuff.

The California Air Resources Board, with help from then-Democratic Assembly Speaker John Perez, D-Los Angeles, exempted itself from the state’s open meeting act through a surreptitious trailer bill in the 2012 state budget.

Western Climate Initiative Inc. was formed in Delaware. However, Delaware is not subject to California state open meeting or sunshine laws. The only reason to register the corporation in Delaware is the lack public or legislative scrutiny on any of their meetings or actions they take.

Senator Andy Vidak (R-Hanford), explained what so many in California are living: “I represent the poorest district in the state. I cannot, in good conscience, vote for yet another bill that will raise gasoline and electricity rates on the poorest of the poor.  Let’s be honest, this is a tax — and a regressive one at that! Then where does the money go? It goes to rebates for rich folks who buy a Tesla. Billions go to the boondoggle that is high-speed rail, which is a gross polluter, now and for decades to come — again, off of the backs of the poor who currently live in energy poverty.”

Republicans need a new message and direction – starting with demanding the constitutionally required legislative oversight of the Air Resources Board.

Millions of Californians are living a lower quality of life and will be unable to heat or cool their homes properly, pay their rent or mortgage, or save for college and retirement. Our utility and gas rates, which have been dramatically increasing in recent years, will go up even higher.

Clearly, the biggest problem with California is the CA GOP, which could have blocked this cap and trade tax. They have fully sold out. However, it wouldn’t be that difficult to turn California around, but only if we all drain the CA GOP swamp, and shut down the corrupt Democrats.

Part ll: How did the dirty deal happen? Was the “alleged affair” between California Assembly Republican leaders Chad Mayes and Kristen Olsen used as leverage?