By Katy Grimes and Doug Haaland

In post – 9/11 America, “If you see something, say something” has become the unofficial slogan of the Department of Homeland Security, with the idea of enlisting American citizens to help identify real terrorism threats. Yet California Democrats in Congress apparently ignored this advisory with their silence, support and promotion of possible terrorists in their own workplace.

The Congressional hacking suspects – the Pakistani born Awan brothers – ran the Information Technology (IT) for dozens of Democrat congressmen and women, and could read every email and communication sent or received. Members of the California Democrat House delegation also hired the Awan brothers, along with nearly 30 more House Democrats as a “shared employee,” according to Legistorm.

In fact, the hackers appear to have had access to some of the most sensitive classified information provided to members of several intelligence oversight committees. As “shared” employees, their salaries were cobbled together with part-time payments from multiple members, on an estimated 80 House Democrats’ payrolls, the Daily Caller reported. 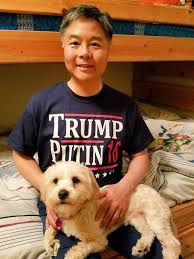 “March 10 was the most recent end date for Awan’s employment under both Lieu and Cardenas, records show.” CBS Los Angeles reported.

Ironically, Rep. Ted Lieu is something of an IT whiz kid, according to his Congressional bio: “As one of only four computer science majors currently serving in Congress, and as a member of the House Oversight and Government Reform’s Subcommittee on Information Technology, Ted is frequently sought out for his insight on technology and innovation matters including cybersecurity, cloud computing and innovation as well as the sharing and creative economy.”

It’s a darn shame Ted Lieu wasn’t sought out for his insight on cybersecurity in the House.

While Imran Awan ran technology for multiple House Democrats, he soon brought in four of his relatives — including brothers Abid and Jamal. The Awan family members appeared on the payroll of dozens of other members, collecting $4 million in taxpayer funds since 2010, the Daily Caller reported:

U.S. Capitol Police named him and his relatives as subjects of a criminal probe on Feb. 2, and banned them from the complex’s computer networks. But members of Congress for whom they worked have downplayed their access or publicly ignored the issue.

“They had access to EVERYTHING. Correspondence, emails, confidential files — if it was stored on the Member system, they had access to it,” the former House Information Resources technology worker with first-hand knowledge of Imran’s privileges told The Daily Caller News Foundation.

Imran Awan and his two brothers, Jamal and Abid, are at the center of an investigation that deals with, among other things, allegations of illegal access.

“Two of them have been linked to an emerging security breach. The office of Andre Carson, the second Muslim in Congress, had employed Imran Awan. As did the offices of Jackie Speier and Debbie Wasserman Schultz; to whom the letter had been addressed.”

It has also been revealed recently that the Pakistani IT staffers were sending sensitive information to the Muslim Brotherhood.

Imran Awan, was arrested last week on a bank fraud charge and was prevented from leaving the country. His wife, Hina Alvi, charged as a co-conspirator, according to the FBI affidavit, fled the U.S. for Pakistan in March with their children.

The bank fraud charge is just the tip of the iceberg for Imran Awan. He is accused of attempting to defraud the Congressional Federal Credit Union by obtaining a $165,000 home equity loan on a home he was renting, which was then included as part of a wire transfer to two individuals in Faisalabad, Pakistan, Politico reported.

One of the most significant factors involving the Awan brothers is the fact that they ran information technology for Florida Rep. Debbie Wasserman Schultz – who resigned as head of the Democratic National Committee after a disastrous email hack she blamed on Russians. The Awan brothers even had the password to an iPad used for DNC business, as reported back in March by the Daily Caller.

The Awan brothers were supposedly fired in February (except apparently not by CA Reps Cardenas and Lieu), but Wasserman Schultz kept Imran Awan on her payroll, until the day of his arrest last week, while he was still under criminal investigation by Capitol Hill Police. It also appears that Wasserman Schultz planned to pay her IT staffer Imran Awan, even while he lived in Pakistan, had he not been arrested by the FBI, the Daily Caller reported. Congressional payroll records also suggest that Wasserman Shultz knew Imran’s wife, a fellow IT staffer, left the U.S. months ago while she was a criminal suspect.

Since Democrat members of Congress couldn’t or wouldn’t “see something” wrong with the Awan clan criminal activity, it answers the question of how is it that these same people see nothing but Russia, Russia, Russia for nearly 18 months? For nearly eight months, there’s been clear evidence that the Awan clan has been nothing more than a criminal enterprise funded by America’s taxpayers with the acquiescence of Democrats and supported by the former head of the Democrat National Committee.

Thankfully, there may soon be answers to the many questions raised by the willful blindness of House Democrats with growing calls for investigations by House members focused on the actions of Wasserman Shultz.

Questions that need answers:
• Who granted any security clearances needed for these “IT consultants” to have access to the sensitive information handled by members and committees overseeing national security?
• What files or information was taken from congressional servers and delivered to organizations committed to the downfall of America?
• Who, despite having their access to the House computer system terminated, determined it was proper to continue paying for what appears to be “no show” IT consultant jobs with taxpayer money?

The Federal government, as well as many states, have passed measures requiring a wide range of occupations to become “mandatory reporters” of violations of laws. Doctors, social workers, childcare providers, and teachers, to name just a few, are mandated to report evidence of child abuse and senior abuse.

Perhaps if federal or state legislators refuse to report or cooperate with authorities investigating crimes committed by their staff, they should be considered a part of the conspiracy.

Doug Haaland is a retired Republican policy consultant having spent more than 27 years “Under the Dome.”

The Daily Caller’s Luke Rosiak has the research and data posted at the end of his articles. Scroll down for more links to all of his articles in this series, and to see the complete list of House Democrats who hired the Awan brothers.