Alexander Hamilton, writing in Federalist 68, warned that corruption of America’s political system would most likely arise from the desire of “foreign powers to gain an improper ascendant in our councils.”

Russia’s ongoing work to manipulate and undermine our society through social media is multidimensional and ongoing.

Two aspects of this campaign are particularly offensive.

By now it has been firmly established – beyond a doubt – that the Russian government backed a comprehensive information warfare campaign to twist and turn American public opinion and discourse to serve there interests. While the impact on the candidates in the 2016 general election garners a great deal of attention, that was only subset of a broader effort.

Those with any doubt about the Russian government efforts should read these reports: APT28: A Window to Russia’s Cyber Espionage Operations?, APT28: At the Center of the Storm, both are produced by leading American cybersecurity firm Fire Eye. Additionally, the declassified version of the U.S. intelligence community’s report is also worth reading.

Broadly speaking, the Russian government’s tactics involved both an active disinformation and propaganda campaign aimed at specific groups of Americans, and a sophisticated cyber espionage operation aimed broadly at American political, military, economic and academic organizations and individuals. These tactics were not implemented in silios – they would be combined as necessary.  The disinformation side of the campaign employs Soviet style denial and deception efforts, sock puppets, false fronts, and other tools long familiar to our intelligence sector.

The fact that a foreign government engaged in a systematic, clandestine campaign to influence our fellow citizens should be offensive to every American, especially conservatives who have made protecting our sovereignty a priority. Equally offensive is the extent to which Russian trolls specifically sought to imitate conservative activists, earn their trust, and then abuse that trust by actively working to move rhetoric and discourse into extremism, absolutism and separatism.

During the 2016 campaign I noticed a degree of rhetoric on social media, ostensibly coming from conservatives, that was just didn’t seem right.  I have been a conservative activist for nearly 30 years, chairman of a large county Republican party with thousands of activists, and leader of the largest state Republican Party in the country.  From this experience I know the typical fellow conservative activist is a patriotic, positive volunteer contributing their time and resources to making our country a better place. Racism, separatism, and absolutism are not features of the conservative activist base in our country.

Yet that is precisely where those working in Moscow’s and St. Petersburg’s troll farms were trying to take us.

That account has now been shut down because it was established and run not out of the Volunteer State, but out of a troll farm in St. Petersburg called the Internet Research Agency, funded by an oligarch ally of Russian President Vladimir Putin.

It’s an example of Russian propaganda tactics in action. The account name gave it a Republican veneer.  Many of the tweets were typical conservative and not outrageous – a tactic to gain trust from potential followers by coming across as strong and clear but not over the line.  A small number of tweets then sought to push followers into extremist directions, for example in one case by suggesting that unarmed black men shot by police deserved their fate.

The Russians created thousands of fake social media accounts with the same purpose in mind: imitate reliable conservatives, gain followers, then push those followers into extremism by creating the false perception that such extremism is the new normal, and not extreme at all.

On Twitter, many of these accounts would include language in the profile indicating the person is pro-second amendment, a veteran, prolife, Christian, etc; all part of creating online sock puppets designed to look just like us.

“Heart of Texas” is one of 470 pages Facebook has shut down because, like @TEN_GOP, it was created and run out of St. Petersburg, not Texas. Like other Russia-created accounts designed to appeal to conservatives, this one featured many posts that were simply pro-Texas. Then, like the other accounts, content started to appear pushing Texas secession.

Unfortunately for the Russians, many of their trolls aren’t paid enough to learn good English: many posts are awkwardly written and contain obvious spelling and grammatical errors, plus word choices, that make clear the generator of the content is not a native English speaker. 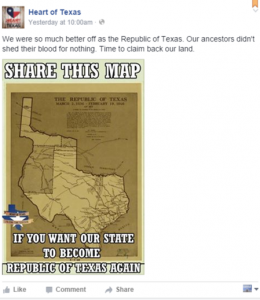 The Russians sought to play both sides against the middle.  While working to gin up conservatives, they simultaneously worked to gin up people against conservatives.  For example, the trolls set up accounts posing as black activists and worked to convince their target audiences that America is hopelessly racist.   Meanwhile, another project line targets our men and women in uniform and veterans, pushing conspiracy theories and working to undermine confidence in our government and institutions.

Looking at all of the activity we now know emanated from the Russian government, and reviewing it in the context of what they have been up to in similar campaigns aimed at the Baltic states, Poland, Ukraine and elsewhere in Eastern Europe, we know their goals. They’re not on the side of the left or the right – they’re on the side of chaos. And their goal is to create as much of it as possible, to drive internal divisions and discord to such intensity that it tears at the fabric of our society and culture.  That’s why they dwell on charged issues of race, ethnicity and religion and invoke the most extreme and hysterical and extreme language they can squeeze out of Google translate.  The chaos they seek to create gives them space to operate, and damages our ability to respond by keeping us tied up in vehement, fruitless arguments.

Now that we know what they’re up to, it’s our responsibility to defeat it. Every American needs to know what the Russians are up to, and not take the bait. Be more skeptical of hysterical claims and language online. Focus on putting good policies into action and the champions of good policy into office. Remember those with different ideas are our competitors in the public policy arena, but they are not our enemies. Ultimately, our country’s greatest strength is the principle of freedom that brings us together, and it is that unity that can and must prevail.

Ron Nehring served as Chairman of the California Republican Party from 2007 to 2011.  He was the Republican nominee for Lt. Governor in 2014 and served as presidential campaign spokesman for Texas Sen. Ted Cruz in 2016.