CA Gov. Jerry Brown’s War Against Reality… and the Climate

Jerry Brown says the world needs ‘brain washing’ on climate change. Sounding indeed brainwashed, Brown said, “The problem … is us. It’s our whole way of life. It’s our comfort … It’s the greed. It’s the indulgence. It’s the pattern. And it’s the inertia.” 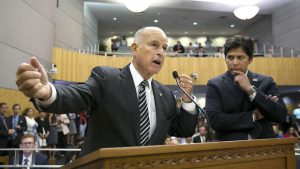 I hate to be a party pooper but the totalitarian trio of Stalin, Mao and Pol Pot also said the world needed brainwashing. But I digress.

Brown arrived at the Vatican in Rome Friday for 14 days of “climate talks.” Yet Sacrament Bee reporter Christopher Cadelago, who usually is comfortable sharing opinions, twisted himself into a pretzel trying to explain Brown’s dictatorial statements. Brown “said the path to transformational change must include the mass mobilization of the religious and theological sphere, but also the prophetic sphere,” Cadelago wrote.

Brown’s handlers really shouldn’t let him out in public any more.

Let’s have a fact-based chat.

If the level of air pollution in the United States is among the lowest on the planet, according to the World Health Organization, why does California Governor Jerry Brown believe “the threat of climate change could be more dangerous than that of fascism during World War Two?”

Only the Solomon Islands, the island of Vanatu, New Zealand and Micronesia are more pollution free, according to the most recent WHO report on air pollution. In the report, charts and graphs show the U.S. is one of the countries with the cleanest air in the world.

So why is Jerry Brown embarking on yet another overseas trip (gigantic carbon footprint ) to another climate summit organized by the Pontifical Academy of Sciences at the Vatican? State Senate president ignoramus Kevin de León, will also give remarks at the conference (that ought to be cringe-worthy).

Jerry’s a Marxist and therefore believes the bills he signs into law are for the commoners, while he and the elite class are exempted.

“The governor has sought to contrast California’s approach to tackling the climate challenge with federal rollbacks led by the Trump administration, saying that while ‘the White House declares war on climate science and retreats from the Paris Agreement, California is doing the opposite and taking action,’” the Sacramento Bee reported.

Well, the truth is, Brown is at war with Donald Trump.

“Following Trump’s election, California’s Democrat Governor Jerry Brown has taken a mostly defiant stance, telling Trump that “California is not turning back” in reference to the president’s border security and immigration policies.[i]I wrote in my new book, “California’s War Against Donald Trump: Who Wins? Who Loses?”

“Brown, now 79, even warned the President, “You don’t want to mess with California,” in an interview on NBC’s ‘Meet the Press’ in March.”

Remember when Gov. Jerry Brown traveled to Vatican City in 2015 to discuss climate change with Pope Francis? It was clear then Brown was seeking to burnish his legacy as a world climate change leader. “In the spirit of the pope’s encyclical, this unprecedented gathering of global leaders is a wake-up call to face up to the common threats of climate change and human exploitation,” Brown said in a statement. “This is about the future of humanity and how we as humans live and treat one another and the natural world around us.”

A scientist friend reminded me that a group of highly distinguished climate scientists was physically blocked from entering the Vatican’s Pontifical Academy of Sciences where they had traveled to have a scheduled meeting in 2015. (Never let the facts get in the way of the leftist agenda)

Brown expanded his themes in his January 2017 State of the State address to make it very clear he would be at odds with the Trump administration, and the President. Brown dug in his heels and pledged to continue forging dubious climate agreements with other states and countries.

The elites are also exempted from hypocrisy. In 2016, I explained: “The inconsistencies of California Gov. Jerry Brown’s climate change policies, together with his immigration policies, are formidable and deliberately deceptive — one policy is driving taxpayers and businesses out of the state, and the other is driving droves of unskilled, unemployed aliens into the state.”

Brown claimed in 2015 that California has an overpopulation problem, and the ongoing drought was proof that the explosion of population in California has reached the limit of what the states’ resources can provide. “We are altering this planet with this incredible power of science, technology and economic advance,” Brown told the publisher of the Los Angeles Times. “If California is going to have 50 million people, they’re not going to live the same way the native people lived, much less the way people do today.… You have to find a more elegant way of relating to material things. You have to use them with greater sensitivity and sophistication.”

So why do Jerry and Democrats offer a welcome mat and a Swag Bag full of goodies to illegal aliens and Middle Eastern refugees? This only makes it harder to meet the strict lower carbon emission goals of California’s Global Warming Solutions Act of 2006, also known as AB 32.

AB 32 was supposed to be based on real climate science that proved that unless dangerous greenhouse gas emissions levels were reduced, the earth’s atmosphere would diminish and we’d all die.

But at the crux of the issue is altered data and science. The data originally produced by the Intergovernmental Panel on Climate Change scientists in the 1990s were altered by government bureaucrats in order to create a crisis, as well as a demand.

Ironically, California already achieved the lower emissions goals largely through advanced automobile technology.  But no government program or agency goes away. So Sen. De Leon authored another bill, SB 32, which called for even further reductions bumped now to 40 percent below 1990 levels, by 2030. They just keep moving the goal posts.

Both AB 32 and SB 32 essentially authorize the California Air Resources Board unlimited power to regulate and even tax businesses without Legislative oversight.

Trump’s approach is rooted in cost-benefit analysis, in that it considers the costs of the regulations to society in terms of lost jobs and harm to the economy in balance with the alleged benefits, is in stark contrast to California’s Democrat leaders’ idea of regulatory power, perhaps exemplified best by their own “War on Carbon” no matter the cost to society.

“And then there’s the Brown family’s semi-secret financial ties to the military dictatorship of Indonesia, a book-length saga unto itself,” Dan Walters dropped into a column in 2010. (Not surprisingly, the 2010 story has been taken down, but this one from 1990 covers everything.) The Brown family hypocrisy has a long legacy.

For your reading pleasure, Anthony Watts of the Watts Up With That website, has a nice long list of climate prediction failures.