Commuter light rail has been an expensive disaster, and now Uber is making it totally outdated

Across the nation, local politicians have felt compelled to spend billions on commuter rail. It’s “feel good” spending pushed by special interests — results be damned.  Commuter rail has been pretty much a disaster.  It’s failed up to now, and is rapidly being made completely outdated by rider sharing (Uber) and driverless cars.  But the madness continues.

Los Angeles is a stark example of the folly of light rail. According to the LA TIMES, the LA region spent over $9 billion on mass transit (primarily rail) since 1985, and they have fewer RIDERS in 2015 than they did in 1985.

In 2004, Denver’s Regional Transportation District (RTD) persuaded voters to pay billions of dollars in taxes to build a 19th century rail transit system for a 21st century urban area. Thirteen years later, this experiment is increasingly proving to be a failure. 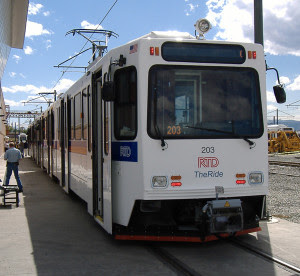 Ridership on Denver’s new R and W light-rail lines is so low that RTD is reducing train frequencies. After more than a year of operating a rail line to the airport, the agency still hasn’t figured out how to make its automatic crossing gates work reliably, a problem private railroads solved more than 80 years ago.

Due to overruns that nearly doubled construction costs, RTD is unlikely to finish all of the lines promised to voters in 2004 without another tax increase. Those cost overruns have also harmed bus riders, who — instead of the enhanced bus service promised by RTD — saw service decline from 39 million bus-miles in 2004 to 36 million in 2015, with more cuts expected in the near future.

The number of Denver-area transit commuters has grown, but not enough to keep up with other modes of travel. According to the Census Bureau’s American Community Survey, the share of commuters taking transit to work in the Denver-Aurora urban area shrank from 5.4 percent in 2006, before any of the new lines opened, to 4.6 percent in 2016, when several new lines had opened and existing ones extended. Though congestion reduction was a major selling point to voters, the trains actually made congestion worse through frequent delays at grade crossings.

RTD’s ridership peaked three years ago, with the first eight months of 2017 seeing 5.1 percent fewer riders than the same time period in 2014. This reflects a national trend, as transit ridership is falling in every major urban area except Seattle.

This national decline appears to be due largely to a combination of low gasoline prices and ridesharing services. A recent survey found that one-third of Uber and Lyft riders would have taken transit if ridesharing were not available. If true, the rapid growth of these services explains nearly three-fourths of the 2016 decline in transit ridership.

Now that hydraulic fracturing has given the United States control over energy supplies, neither low gas prices nor ridesharing are going away anytime soon. In fact, the loss of transit riders to ridesharing services will rapidly accelerate as shared, driverless cars replace human-driving vehicles. Companies as diverse as Ford, Google, and Uber are racing to put driverless cars in our cities within five years that will be both more convenient and less costly than transit.

Why walk in the summer heat or winter cold to catch a bus or light rail when an app on your smart phone will bring a car to your door that will take you to your destination faster and for less money than a transit fare? Given the huge advantages of driverless ridesharing over transit, it is likely that, by 2030, most publicly subsidized mass transit outside of New York City will completely disappear and Denver’s multi-billion-dollar rail lines will be running empty or rusting away.

Despite these predictable trends, transit agencies in many other cities are making the same mistake as RTD by planning and building obsolete, infrastructure-heavy transit programs. Los Angeles Metro is planning to spend tens of billions on new light rail even though, to pay for rail, it has cut bus service, losing nearly four bus riders for every new light-rail rider gained since 2010.

Honolulu is building an ugly, elevated rail line that was supposed to cost less than $3 billion but now is estimated to cost at least three times that amount. Nashville is proposing a $6-billion light-rail system and Durham is talking about a $3.3-billion light-rail line.

Meanwhile, cities with older rail transit systems including Boston, Chicago, New York, Philadelphia, and Washington, have allowed maintenance backlogs to grow to tens of billions of dollars, leaving their systems unreliable and even dangerous. No one ever tells voters that rail transit is not only expensive to build, it must be expensively rebuilt every thirty years, and few transit agencies budget for that reconstruction.

With the pending arrival of driverless ridesharing, RTD and other transit agencies should stop building new rail transit and start preparing to transition their operations. Instead of spending billions rehabilitating worn-out rail lines, cities like Boston and Washington should replace them with buses. All transit agencies should pay down their debts and unfunded pension obligations so as not to saddle future taxpayers with those obligations after transit disappears.

In fact, transit agencies should do these things anyway, as they make more economic sense than going deeper into debt building infrastructure agencies can’t afford to maintain. But the twin signals of declining ridership and rapid development of driverless cars makes it imperative that agencies adopt these policies now rather than wait until their customer base is almost completely gone.

Randal O’Toole directs the Transportation Policy Center at the Independence Institute, a free market think tank in Denver, and is a senior fellow with the Cato Institute in Washington, DC. He is author of The Coming Transit Apocalypse.