The brother of Stephon Clark interrupted the Sacramento council meeting, took ahold of the microphone to attack the Sacramento cops who shot his brother, and planted his butt on the Mayor’s desk to yell in his face. This happened as the Mayor looked stunned, and police looked on.

Simultaneously, hundreds of BLM protesters, frustrated at not being able to get inside the council meeting, blocked the entrance of nearby Golden 1 Center in downtown Sacramento for the second time in one week, preventing thousands of ticket-holding Kings fans from attending an NBA game. And City Council and Mayor allowed it to happen.

“You ain’t seeing no game tonight. Join us or go home!” protesters shouted at the Kings fans, the Sacramento Bee reported. And police did not break up the crowds, likely on orders.

Why does this always happen in Democrat-run blue cities?

The First Amendment protects the right to conduct a peaceful public assembly; it does not provide the right to conduct an assembly at which there is a clear and present danger of riot, disorder, or interference with traffic on public streets, or other immediate threat to public safety or order.

Sacramento Mayor Darrell Steinberg violated the First Amendment by allowing protests at which there clearly was disorder, a clear and present danger of riot,  interference with traffic on public streets, and other immediate threat to public safety or order.

Clark was shot and killed following a 9-1-1 call to police about someone breaking windows with a crowbar, and trying to open the windows of several homes. He ended up in his grandmother’s Sacramento backyard, followed by police officers who believed he was pointing a gun at them. And they did not know the home belonged to his grandmother. Police footage shows the exchange took only 10 seconds, when officers fired 20 shots, hitting Clark multiple times, police told CNN affiliate KOVR.

Friends, family and black lives matter activists asked at the council meeting “Why would you include his criminal record?,” said Betty Williams, president of the local chapter of the NAACP. “What does that have to do with his death?”

Stephon Clark had a lengthy juvenile court record dating back to 2012, with offenses that include grand theft, robbery and receiving stolen property.

According to Sacramento Bee records, as an adult, Stephon Clark had been charged in four criminal cases since 2014 including felony armed robbery and assault, and endangering the life of a child. Court documents indicate that Clark pleaded no contest and spent a year on a sheriff’s department work project to satisfy his jail term. – for armed robbery.

In late 2015, Clark was charged with “pimping” after sheriff’s deputies stopped him and a woman while they were driving in a “high prostitution and crime area” in North Highlands,” the Bee reported. “At the time, both Clark and the woman were on probation, records indicate. Clark pleaded no contest to the charge.”

“In 2016, Clark was charged with domestic violence ‘resulting in a traumatic condition’ to the victim. The incident happened at a residence in Elk Grove. When police arrived, they found the woman “holding a bag of ice to her face,” according to a narrative by Elk Grove police. She had suffered “bruising and swelling to her right eye,” it says, and complained of pain in her right elbow. The woman said Clark had punched her.

Clark’s most recent charge occurred earlier this year, when he again was charged with domestic violence.

Stephon Clark’s family is demanding the Sacramento District Attorney to charge the police officers with murder. Earlier Tuesday at a news conference, Sacramento Police Chief Daniel Hahn announced the state attorney general would be an independent part of the investigation into the police shooting. At the same conference, California Attorney General Xavier Becerra announced  that he will conduct an independent investigation of the shooting.

Black Lives Matter Sacramento founder Tanya Faison said after the press conference that BLM activists want an independent civilian-led investigation instead. “There needs to be civilian investigators, people that are regular citizens that pay the salaries of these police officers. They need to be the ones in charge,” she said. “We’re their bosses, and it needs to look like that.”

This shit show and riot could have been prevented with leadership and a concern for the safety of law-abiding citizens, rather than allowing thugs to run roughshod. “But Mayor Darrell Steinberg adjourned the meeting about 8:25 p.m., hours early,saying he was concerned about safety. An altercation between police and protesters on the sidewalk just outside the council chambers and banging on the chambers’ windows had disturbed the gathering,” the Sacramento Bee reported. Today main stream media are calling the riot a “disruption.”

Actually, while protesters were unruly inside and outside of council chambers, as the photos show,  Mayor Steinberg was confronted by Stephon Clark’s brother Stevante Clark, was clearly out of control as he jumped up on a desk, and then planted his butt on Mayor Steinberg’s desk up on the council dais. When Steinberg tried to speak to him, Clark shouted, “Shut the f— up.”

The photos I’ve included were published by The Daily Mail UK, and not by the Sacramento Bee.

Additionally, the latest “Build Black” movement is well organized and funded, with professionally printed signs, t-shirts, and obviously by BLM. 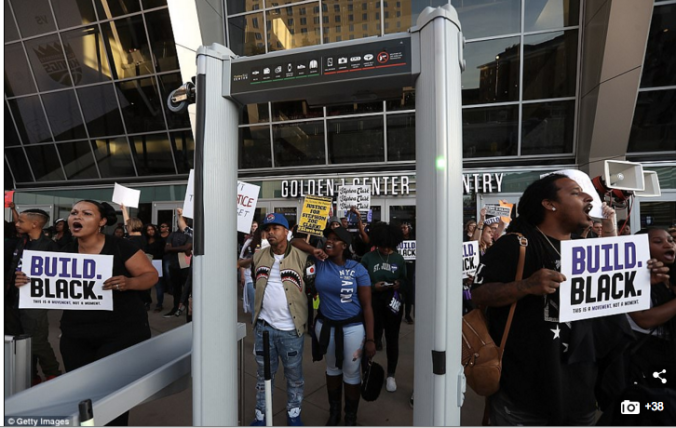 “The man who made the initial 911 call, which law-enforcement says came in at 9:13 p.m., reported an individual breaking windows on the 7800 block of 29th Street,” Capitol Public Radio reported. “The caller also reported that the individual was trying to get into the backyard of a house by jumping a fence.

In his call, he said he heard a noise, came outside, and witnessed a man in a plain black hooded sweatshirt standing next to his truck. Then, he saw one of his truck windows had been smashed open. The caller says he turned to grab a bat, but the man ran away.”

The Sacramento Police Department released the videos of the shooting of Clark  less than 72 hours after the incident. Mayor Darrell Steinberg wrote in a statement that he “viewed the videos carefully” and that, “based on the videos alone, I cannot second guess the split-second decisions of our officers and I’m not going to do that.” That is nice, but Steinberg needs to treat protests like this as riots. Until he does, downtown Sacramento is a dangerous and violent place, ready to blow.

Photos are all from the Daily Mail UK report