Why would Senate Democrats oppose a transparency bill, when every one of them campaigns on the importance of government transparency? 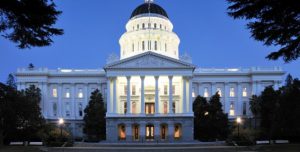 In addition to being a State Capitol political reporter, my other job is President of the Sacramento Taxpayers Association, which has been a presence in Sacramento, CA since 1961.

The bill will require each California state agency or department to post simple budgetary information on the home page of their website in a manner that is easily interpreted and understood.

Sounds like a simple, common sense measure, right? Doesn’t the word “transparency” roll off the lips of every campaigning politician?

Despite this bill being the perfect opportunity for lawmakers to perform an actual act of transparency, Senate Democrats have a problem with this simple, straight forward idea, because not one of the Democrats on the Senate Committee on Governmental Organization voted in favor of SB 921. In fact, not one Democrat had the stones to even cast a “no” vote. As the roll was taken, every committee Democrat avoided eye contact by looking at the ceiling or down at the floor as they abstained, so no one could ever accuse them of voting against such a common sense transparency measure. I’ve heard this cowardly act described as being “chicken shit.”

Open Government Is A Pipe Dream in CA

In California, as in other states, lawmakers and public officials have introduced many open government transparency bills, but not many are actually passed and signed into law, or they are significantly diluted in strength in order to gain passage.

For transparency efforts to actually build trust with voters and constituents, state government must do more than upload static PDF files deep inside a huge government website, or post raw data files online. State government must make budget data more accessible, because currently it is not.

The Governor’s California State Budget is over 2,000 pages, and proposes spending $190.3 billion in total state funds. Inside this behemoth hides each state agency’s budget details. It takes the skills of a Forensic Accountant to locate what’s lurking in these budget pages. An accountancy degree or CPA license should not be required to access state agency budgets, or even the basics of those budgets.

“Agency websites provide extensive information about the breadth of oversight they’ve been given, however, the only place to find the information we are proposing to cite is within the Governor’s budget, an over 2000 page document that is not exactly easy to read,” Sen. Mike Morrell said. “Without the knowledge of where to look for obscure budget documentation, most Californian’s would likely never be able to find such information – information needed to keep the public informed of the state’s use of tax dollars.”

The real problem is not just the difficulty in accessing and navigating the budgets, many state agencies force the requestor to file a Public Records Request, just for basic budget information. And today, PRAs are regularly stalled, ignored and challenged. State budget information should be readily available to anyone seeking it. I’ve had Public Records Requests ignored for up to a year despite follow up. Other requests were just ignored unless I followed up on them. I’ve been challenged on the information I was requesting, and I’ve received documents almost entirely redacted of information that should not have been. That is the game many in state government play with citizens and taxpayers requesting budget information.

By requiring each of our state Government agencies to legibly display in a conspicuous place on the homepage of each agency website, the total number of full-time and part-time personnel employed, as well as the authorized budget and sources of funding for the current and previous fiscal years, SB 921 will give Californians a clearer picture of government spending where it can easily be found, and would be a positive step towards a more accountable, transparent and open state government – something politicians always campaign on.

But that’s not what happened.

According to David Wolfe of The Howard Jarvis Taxpayers Association, “while limited in scope, this proposal will provide the public easier access to important information that allows them to ask informed questions about how tax dollars are spent. It should neither be difficult for taxpayers to learn simple facts about their government nor for government to post a paragraph on its homepage and update it annually.”

Why do Democrats insist on hiding information from the public? Ask your elected lawmakers this question.