Surprising no one, on Nov. 27, the California Supreme Court upheld the dubious Mandatory Mediation and Conciliation law against Gerawan Farming. The California Supreme Court heard the Gerawan case last fall on whether the state’s attempting to force mandatory agricultural labor union contracts violates the constitutional safeguard of equal protection. Fresno-based peach grower Gerawan Farming is one of the largest agriculture employers in the state.

The serious wrangling with the United Farm Workers Labor Union and ALRB began again in October of 2012, when the union insisted that a multi-decades old collective bargaining agreement covering Gerawan workers be reactivated, and tried to invoke a 2002 law that empowers the California Agricultural Labor Relations Board to impose a union contract on the company’s farm workers, and to deduct three percent of the 5,000 Gerawan employees’ pay—without their consent.

The Mandatory Mediation and Conciliation law allows state mediators to force union contracts on workers through binding mediation. – in essence, it shoves a contract down the throats of workers, without their consent. In the 48-page decision, the California Supreme Court Justices said, “We conclude that the MMC statute neither violates equal protection nor unconstitutionally delegates legislative power.”

“California Gov. Jerry Brown and the Democrat-supermajority State Legislature hold the state Supreme Court’s purse strings. Evidence of this can be found in the Monday California Supreme Court 7-0 decision in the Gerawan Farming case,” I wrote at the time of the decision.

“Today’s decision imposes the United Farm Workers on our employees, whether they want the UFW or not,” Gerawan Farming said in a statement. “In this case, since UFW had disappeared for almost two decades, 99% of the Gerawan employees never voted for UFW representation.” The California Supreme Court justices also notably did not place any value on Gerawan’s argument that the UFW labor union’s 22-year absence meant it forfeited its status as an employee representative.

Gerawan has since petitioned the United States Supreme Court for review of California’s Mandatory Mediation and Conciliation law, which appears to collide with the First Amendment and due process principles. 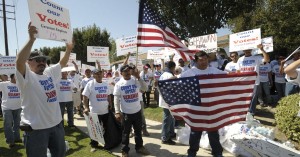 The Gerawan Framing case presents the question whether a state may impose contract terms on one private employer and its employees against their will by means of non-consensual arbitration. Gerawan attorney David Schwarz referenced the Wolff Packing Co. trilogy of decisions (1923, 1924, 1925) in the petition, in which the U. S. Supreme Court established the constitutional dividing line between mandatory collective bargaining and compulsory imposition of terms, deciding that the previous law infringed on free speech and association, and the rights of workers and employers to enter into contracts.

“The Wolff’ trilogy has never been overruled or even questioned by the Supreme Court or any other court. With virtually no analysis or explanation, however, the California Supreme Court below dismissed Wolff as a ‘completely repudiated’ relic of the Lochner era,” Attorney David Schwarz wrote.

As Schwarz points out in the writ, “In three related cases that are the foundation of modern labor law, this court [US Supreme Court] unanimously held that an analogous compulsory arbitration scheme infringes on the liberty and property interests of private employers and employees, and violates the employees’ freedom of association.”

The need for U.S. Supreme Court intervention is particularly heightened in this case. The union that invoked the MMC statute against Gerawan Farming had “disappeared from the scene” for the preceding 17 years, during which time the union made literally no contact with Gerawan or its employees. In late 2012, the union resurfaced and invoked MMC, forcing pay and contracts onto farmworkers and employers without their input or vote, making them second-class workers.

“In response, Gerawan farmworkers petitioned for a secret ballot decertification election. An election was held more than four years ago; the ALRB impounded the ballots, set aside the election, dismissed the petition and, over the objections of Petitioner and thousands of its employees, imposed an MMC contract that requires the farmworkers to pay 3% of their earnings to the union and forces Petitioner to fire employees who refuse to comply. Even worse, the contract prevents the employees from seeking to rid themselves of the union for years to come: As interpreted by the California Supreme Court, California labor law prohibits farmworker employees from seeking to decertify a union until the final year of a collective bargaining agreement, and the MMC decree is treated under California law as if it were a consensual collective bargaining agreement.”

The California Agricultural Labor Relations Act was enacted in 1975 by the California Legislature as a filler to the National Labor Relations Act which exempts from its coverage agricultural labor ostensibly to safeguard the right of employees to “bargain collectively through representatives of their own choosing.” Except that is not what has happened.

And then, in 2002, at the behest of the United Farm Workers of America, California deviated from the federal model by imposing compelled contracting—or “compulsory interest arbitration”—via MMC.

As the petition explains, “although the MMC statute “refer[s] to the end result as a ‘collective bargaining agreement,’ there is no agreement.”  Gerawan, the employer, does not “agree to be bound by the terms of employment imposed” or “agree to submit to interest arbitration at all.”  Nor are the workers allowed to vote on whether to accept the contract, as is typical in the case of a contract negotiated between management and labor. The “agreement” is in reality a state-imposed directive, its terms set by the state labor board.

The Wolff Packing case is not dead. And this is why the U.S. Supreme Court should send this message to California about the Gerawan farm workers versus the California Agricultural Labor Relations Board. Remember, the CA Supreme Court decision was rendered after the Agricultural Labor Relations Board spent $10.8 million to prevent Gerawan Farming Workers’ 2013 decertification election votes from being counted—more than $4,100 per vote to deny farmworkers their legal rights to be heard. The ALRB doubled its budget and staff, and still Gerawan’s employees do not want to be unionized by the UFW or forced into union servitude by the California ALRB.