California’s elected Democrats are pushing for a communist holiday, at the expense of a U.S. President’s Day. Remember during the Cold War when “better dead than Red?” was the thinking? 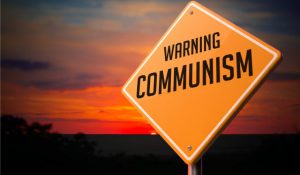 History repeats itself because evil never goes away.

Democrat Assemblyman Miguel Santiago, D-Los Angeles, authored AB-3042 to combine the birthdays of U.S. Presidents George Washington and Abraham Lincoln into one “President’s Day” while designating May 1 for International Workers’ Day celebrations, a Communist holiday. The bill has passed two Assembly committees, and actually made it to the Assembly floor for a vote last week, but came up short. However 22 Democrats voted in favor of the bill’s passage, while 29 Assembly members abstained with “No Vote Recorded,” and did not even have the guts to make a vote.

Santiago is another career politician supported entirely by big labor unions. His previous job was the District Director for former Assembly Speaker John Perez. Yes, he’s just another Capitol staffer who ascended to elected office, with no real-world experience. 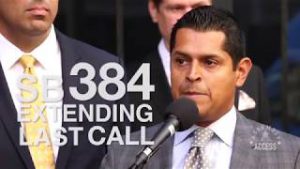 With the Cold War a distant memory, the left would like Americans to forget that May 1st, “May Day,” is the most important day of the year for communists, socialists, and anarchists. In the Soviet Union and communist bloc countries, May Day is celebrated with huge parades, showcasing missiles, tanks, and military might, brigades of goose-stepping troops, Communist red flags, and banners of Karl Marx and Vladimir Lenin.

In non-communist countries the communist and socialist parties have always held May Day celebrations, usually under the auspices of the U.S. labor movement deemed “International Workers Solidarity Day.”

How quickly we forget.

If passed, Assemblyman Santiago’s bill would:

“authorize a school district, county office of education, or charter school, instead of observing “Washington Day” and “Lincoln Day” as separate school holidays, to designate the 3rd Monday in February as a single school holiday to be known as “Presidents’ Day,” if the school district, county office of education, or charter school designates May 1 as “International Workers’ Day” and closes its school, or schools, as applicable, on the Monday or Friday of the week in which May 1 occurs to observe “International Workers’ Day.” The bill would require schools that elect to observe “Presidents’ Day” and “International Workers’ Day,” pursuant to the bill’s provisions, to hold exercises in memory of Abraham Lincoln and George Washington and to commemorate and direct attention to the history of labor movements in the United States.”

In fact, according to Santiago, in the bill analysis he states that the need for the bill is, “Today, many of California’s students have never learned about the incredible struggles that workers undertook to win basic labor rights and build the middle class. In addition, many students in California do not know about the important role that immigrants have played in the labor movement and their fight to win basic human, civil, and economic rights.”

The Democrat Party is Destroying America

The Democrat Party, no longer preaching liberalism or democracy, has adopted many communist intentions to destabilize and destroy America, from cultural rot, to demonizing prayer and religion, to socializing and destroying public education, to open contempt for the rule of law.

This bill would make May Day a state-mandated holiday and force schools “to commemorate and direct attention to the history of labor movements.”

“I’m aghast that a bill like this would be able to get through committee,” Republican Matthew Harper, R-Long Beach, argued on the floor of the State Assembly. “Are we going that far to the left?”

“This is ridiculous, this is insane, this is un-American. And for folks who think that the U.S. won the Cold War with the Soviet Union, this makes it sound like we’re going in the other direction — that indeed California is kowtowing to the Soviet domination of the Cold War,” Harper added.

It’s also rather hypocritically ironic that since the election of President Donald Trump, the left has been irrationally claiming that he and his campaign colluded with the Russians to win the election. But wait… this bill indicates that Democrats and the left uphold communism… so which is it?

I would argue that all of the frivolous school holidays should be cancelled altogether so that students may be taught about the deadly consequences of the policies advocated by the Democrat supermajority in our state legislature, as well as the evils of Communism, which is responsible for more than 100 million brutal deaths and murders.

Many wondered why Xavier Becerra was chosen by Brown. But all anyone needs to do is observe the radical California Legislature, and fanatical Gov. Jerry Brown, to see the trend of militant Marxist, Socialist, Jesuit, Liberation Theology, Latino activism on the increase.

The goal by these extremists in California is to push the state, and eventually the country to such a crisis, a reorganization is the only cure. That is what Communists do. Modern day “Progressives” as they like to be called, like Brown and Becerra, refer to themselves as Multiculturalists and Progressives. But as history very clearly demonstrates, using Marxism as the cure to anything in society is a very dark fairytale.

The term “progressive” is simply another way of saying “socialist” or “Marxist;” But it’s as important to recognize how liberation theology factors into the radical Latino lawmakers: In Latin America, the big enemy is not Marxism, it is capitalism.

An article I wrote in 2017, Gov. Jerry Brown: Facilitating The Inevitable California Collapse, explains: “Destroy the middle class in America, and Socialism takes over—economic growth is killed, people turn on each other, free speech is attacked, the government grows and becomes more tyrannical, and individuals are not treated equally under the law.

Karl Marx authorized any means necessary to establish communism. When those inevitably violent means are used to set up states that collapse after killing and enslaving millions, his apologists claim it just “wasn’t real communism,” and try again.