Latest vile anti-Semite to run for Congress is from California

It’s happened before: Some vile racist or anti-Semite runs for an office they have no chance of winning in the hopes of drawing attention to themselves, or their cause. This is exactly what happened earlier this year when Holocaust denier Arthur Jones ran for Congress as a Republican in the heavily Democratic 3rd Congressional District of Illinois. He has been denounced by the Republican Party but will still appear on the November ballot as a result of winning the uncontested GOP primary in the district.

Well, now we have another one of these guys. This time it’s here in California. Today’s vile anti-Semite is John Fitzgerald, who is running for Congress in the heavily Democratic 11th Congressional District in Contra Costa County. The district, in which Hillary Clinton won 71.% of the vote in 2016, is currently represented by Democrat Mark DeSaulnier.

Fitzgerald has zero chance of winning this seat, yet he currently has the official endorsement of the California Republican Party by virtue of being the only Republican running for the office. Under rules adopted by the party following the passage of California’s deeply flawed top-two primary system, the party endorsement goes to any Republican running for state legislature or Congress when they are the only party member running. The Board of Directors may take an affirmative step to reverse the endorsement, which of course should happen immediately.

In a post on his campaign website that went up on May 23rd, Fitzgerald peddles numerous anti-Semitic conspiracy theories. He asserts as “truth” that Jews “played a prominent role in the African slave trade,” linking to an article that further peddles this conspiracy theory. He goes on at length peddling numerous other anti-Semitic claims and theories. I won’t link to his website or post because I have no interest in driving up his search results, but you can Google this guy yourself. 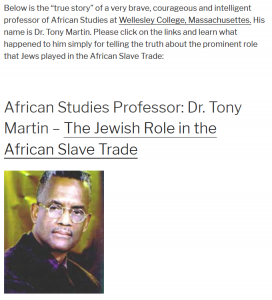 So, what should be done about this?

First and foremost, absolutely no one should vote for this guy. Unfortunately, the state party website lists Fitzgerald as the endorsed party candidate, and since many Republicans rely on the site for guidance when voting, combined with his being the only Republican candidate, he will get an unfortunate number of votes. But certainly all that should come to a screeching halt now.

Second, the state party Board of Directors, which is entirely composed of good people I know personally, needs to reverse Fitzgerald’s default endorsement.

And third, Republicans should speak out against Fitzgerald and candidacy for his blatant anti-Semitism. Let’s not wait and see if this gets traction and only then condemn this vile individual who has soiled the good name of our party – we should affirmatively reject both his candidacy and his ideas because they offend our principles.

The Republican Party was founded on the most noble of causes – the abolition of slavery. Just over 100 years later, people of both parties came together in support of the civil rights movement and the abolition of segregation. Racism and anti-Semitism have no place in our country, and good people of both parties have the responsibility to condemn it regardless of the source.