Last weekend as my husband and I were enjoying vin rouge and fromage at one of our favorite Delta wineries in Clarksburg, CA, we discussed Gov. Jerry Brown’s proposed Delta Tunnels project, and how it would destroy the historical, rich agricultural region. Some of our favorite wineries, and all of the Delta agriculture could end up under water and/or the land rendered useless if Gov. Jerry Brown’s unnecessary Delta Tunnels project is actually built. 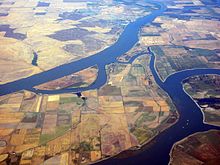 The tunnels project proponents claim it is needed to deliver significantly more, better quality water to Southern California cities and Central Valley farms, and deliver water more reliably – at an original cost estimate of more than $26 billion. When it became evident that the excessive cost was a bad deal for ratepayers as well as the Delta, Gov. Jerry Brown and his appointed water cronies scaled back the project to a single tunnel and a $15 billion price tag in an effort to keep his legacy project alive. However, a single-tunnel would deliver only two-thirds of the water the twin-tunnel project promised.

The historic California Delta is formed by the confluence of the Sacramento River and San Joaquin River, two of the state’s largest rivers. Delta agriculture includes livestock, specialty crops such as asparagus, pears, and wine grapes, and various table vegetables and feed crops.

Jerry Brown has tried repeatedly over the decades to create a delta “conveyance.” Yet voters rejected Gov. Brown’s 1982 plan to build the “peripheral canal” through the Delta during his first turn as governor. That was to be an above ground waterway that would convey water from north to southern California. Voters killed the plan in 1982, dealing Brown and his family’s legacy a major blow. But that didn’t stop the backers.

By the time Gov. Arnold Schwarzenegger was elected in 2003 to replace recalled Governor Gray Davis, water groups were back in the Capitol working with Schwarzenegger on their north-to-south water scheme. However, Schwarzenegger didn’t go public with it until nearly the end of his second term – but he was obsessed with the word “conveyance.” When Jerry Brown was elected for his third term, he ran with it in 2011 now claiming the tunnels were needed to protect the Delta Smelt, a non-indigenous fish.

“To protect smelt from water pumps, government regulators have flushed 1.4 trillion gallons of water into the San Francisco Bay since 2008,” Wall Street Journal columnist Allysia Finley wrote in 2015. “That would have been enough to sustain 6.4 million Californians for six years.” 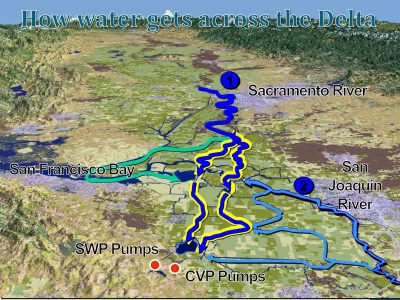 Drought or No Drought?

During his 2016 Presidential campaign, Donald Trump vowed to “open up the water” in drought-stricken California, acknowledging that the “drought” was political. California’s drought conditions are actually historically normal. California’s most recent drought was billed by the state and media as the driest period in the state’s recorded rainfall history. However, scientists who study the Western United States’ long-term climate patterns say California has been dry for significantly longer periods — more than 200 years.

Knowing this truth, one would logically assume that California’s elected politicians would see to it that adequate water storage was the priority, so the residents of the state would not suffer during times of naturally occurring droughts.

Instead, the state of California has flushed trillions of gallons of water out to the Pacific to help save a few fish, instead of providing the water to Central Valley growers and millions of California households.

It’s almost as if Gov. Jerry Brown has been trying to create a water shortage…

“California WaterFix will create 118, 772 new construction jobs and $7 billion in employee compensation,” the California WaterFix claims. “The result of an updated and reliable water delivery system will protect 980, 722 statewide jobs.”

The Water Fix and Eco Restore project was previously called the Bay Delta Conservation Plan. When proposed in 2009, the project originally included both plans for building the tunnels and restoring the delta. The Bay Delta Conservation Plan included restoring 100,000 acres over 50 years. The US Fish and Wildlife Service said it would not issue permits for the plan because the state could not prove that the habitat restoration project would help the salmon, sturgeon, or delta smelt, according to the San Jose Mercury News.

I recently met with several Delta farmers who’ve been involved in the Delta Tunnels fight since the beginning. According to these growers, when the Department of Water Resources and water contractors morphed the Bay Delta Conservation Plan into “WaterFix,” they dropped the habit restoration façade to just go after the water. A large part of the present habitat restoration is now being proposed for the Yolo Bypass but is a separate program – not part of WaterFix.

In the early days of the Delta Vision Blue Ribbon Task Force/Bay Delta Conservation Plan/ WaterFix, it was proposed to do habitat restoration (tidal wetlands/ shallow water habitat/riparian forest) for up to 235,000 acres in the higher elevations in a doughnut shape around the Delta. The central part of the Delta was judged to be too deep for restoration and would be allowed to deteriorate and permanently flood over time. Over time the whole primary zone of the Delta would be habitat restoration around the perimeter and flooded in the middle. That plan would get rid of all the people and farming in the Delta. It would allow tidal influence (salt water) to intrude into the whole Delta necessitating the tunnels being at the very north end of the Delta where the Sacramento River water is still high quality – rather than Southern California water companies having to deal with the expense of salt water.

Each tunnel would be 150 feet below ground, 40 feet in diameter and 30 miles in length. The tunnel project is bigger than the English Channel Tunnel.

Just last week, Gov. Brown, creating another water crisis, signed legislation to ration every man, woman and child to 55 gallons of water per day – all to falsely justify his waning legacy – the Delta Tunnels project. Most of the households will have to choose between showering, or doing a load of laundry under these ridiculous daily restrictions. And forget about taking a long, lingering bath without penalty since most large bathtubs hold more than 100 gallons of water.

“In preparation for the next drought and our changing environment, we must use our precious resources wisely,” Brown said in a statement.

“In California, it takes about 1.1 gallons of water to grow an almond; 1.28 gallons to flush a toilet; and 34 gallons to produce an ounce of marijuana,” Finley wrote in 2015. Since then, California has legalized marijuana growing, with the blessing of Gov. Jerry Brown, despite that the pot crops use exponentially more water than growing food, fruit or nuts.

Does Jerry Brown really know what he wants, or is it just about his legacy?

Over a 13-year period from 1998 to 2010, the state used 47.5% of its developed water supply for the environment, including wild river flows, managed wetlands and wildlife preserves, habitat and water quality control for fish, and required Delta outflows, according to the Department of Water Resources. Only 41.4% of all the developed water supply of California flowed to farmers’ fields and livestock in that same time period.

The project to build twin tunnels beneath the Sacramento-San Joaquin Delta is part of an unnecessary scheme to take more water from the Northern, wetter part of the state, to dryer Southern California. This plan is in lieu of using already approved bond monies to create more water storage reservoirs and facilities, and increase the height of current reservoirs.

But wait? Doesn’t the California Aqueduct already move Northern California water to the south? Yes, it does. The Water Education Foundation explains that the aqueduct carries water from the Sacramento-San Joaquin Delta to the San Joaquin Valley and Southern California.

After delivering about 30 percent of the water to San Joaquin Valley farms and cities via the California Aqueduct, by the time the California Aqueduct reaches the northern edge of the Tehachapi Mountains, there is still as much as 2.5 million acre-feet of water to be delivered to 13 Southern California water contractors according to the Water Education Foundation. Fourteen pumps lift the water almost 2,000 feet over the mountains, where it is split into two aqueducts that serve Southern California.

The Delta is so important, The Water Education Foundation says Everyone in California depends upon the Delta for something:

Parts of Northern California receive 100 inches or more of precipitation per year, while the state’s southern, drier areas receive less precipitation – and just a few inches of rain annually in the desert regions, the Water Foundation reports. At Echo Summit in the Sierra Nevada Mountain Range (7,382 feet), the California Department of Water Resources conducts its snow survey every winter. This is where the majority of California’s water originates.

In the California central valley, much of America’s breadbasket has been reduced to a dustbowl by destructive leftist politics which shut off water to farmers. Is the historic Delta Region next just so Jerry Brown can have his pathetic legacy?