The future of California is not looking as rosy as the state’s Democrat Party politicians want us to believe. Whenever challenged on the stability of his economy, Gov. Jerry Brown’s knee-jerk retort is, “California is the fifth largest economy on the planet,” as if the size of the economy in the most populous state in the nation is relevant. With nearly 40 million people, California now feels and looks like a Banana Republic in the cities, as well as rural areas in the state. 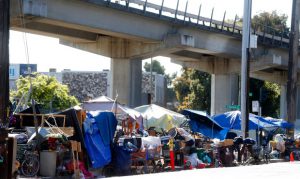 A homeless camp at Market Street and 5th Street is photographed on Thursday, May 18, 2017, in Oakland, Calif. (Aric Crabb/Bay Area News Group) (camp 20)

Whether you are forced to check the public defecation map to navigate the streets of San Francisco, are on the 57 freeway in Santa Ana looking at miles of homeless tent cities and camps, or you are dodging heroin-addicted homeless zombies around the State Capitol and on residential streets in Sacramento, the results are the same — Nearly one-third of the nation’s homeless population lives in California.

California today is not the California I grew up in. And our Democrat politicians keep telling us to just get used to it.

Too many tax-paying Californian earners are leaving California for lower tax, higher-liberty states, willing to forgo the beautiful California weather for more freedom. This does not bode well for California’s future any longer, with the tone deaf Socialist-Communist-Democrats saying we’d all better get used to this. And lest I forget to mention it, this is Jerry Brown’s California where our four-term governor wants to outlaw private ownership of automobiles, supports universal single-payer health care, and issues in-state “visas” for illegal aliens… and constant tax increases are the only way the state and its largest cities seem to operate.

Even while watching the significant outmigration of the middle class, as well as hundreds of millionaires and billionaires, nearly every city has a tax increase on the November ballot.

In 2012 when Jerry Brown was getting his Proposition 30 sales and income tax increase on the wealthiest Californians, Sacramento city voters also passed Measure U, a “temporary tax” to allow the City to enact a half-cent sales tax for six years with all revenue going to the City’s General Fund.

Proponents claimed the “temporary measure” was needed to stop the loss of city services and jobs blamed on the recession. The City of Sacramento said Measure U was needed to restore and protect City services. “The intent was to restore police and fire services, park maintenance and other essential services that were cut between 2008 and 2013.” The city made it appear unthinkable that voters would deny police, fire and parks their rightful budgets.

Most city residents already noticed the loss of city services along with skyrocketing city utility/services bills.

“Budget officials initially projected the tax would generate $31.8 million in the current fiscal year,” sacbee.com reported in 2015. “Instead, Measure U dollars are now expected to reach $41.5 million this year and remain nearly $10 million above original projections for the next four years.”

But Measure U is set to expire in March 2019. So what does Mayor Darrell Steinberg and the City Council do? They put Measure U back on the ballot for November, to double the size of the tax and make it permanent, saying “inclusive economic growth” makes it necessary. “I’m confident when people see what we can do with a full penny, they will respond favorably,” Steinberg said.

If you aren’t familiar with “inclusive economic growth,” you may want to pour a whiskey when you read,”Inclusive growth is economic growth that is distributed fairly across society and creates opportunities for all,” according to many “Sustainable growth” organizations. It’s largely used in third-world countries, so I’m curious why Sacramento Mayor Darrell Steinberg chose this feel-good wording… unless perhaps he agrees that Sacramento is turning into a third world city.

In 2017, a city report found a 30 percent spike in homelessness over the past two years, which many in the region felt underestimated the problem.

At the root of the financial problem in nearly every California city, as well as at the state, is swelling pension obligations, — though no one in Sacramento City Hall wants to admit this is what the Measure U tax increase is really about. “As the costs of pensions and employee salaries increase, the city of Sacramento is forecasting budget deficits beginning next year,” sacbee.com reported. “Those gaps are expected to reach $25 million by 2022.”

In April, legislative Democrats killed three bipartisan bills that would have made significant changes to the future of California’s pension system. Rather than agreeing to reduce the risk taxpayers face in the $1.2 trillion public pension and health obligations, particularly if we face another recession, Democrats killed the bills, opting to grow the state employee pyramid scheme instead. “Sen. Connie Leyva, D-Chino, countered that she wanted to find ways to encourage more people to join pension programs instead of 401(k) plans,” sacbee.com reported. “I just think we need to do everything we can to get our young people into defined-benefit plans,” she said, proving that their only plan is to bring in more state employees.

“CalPers, CalStrs and the State health plan have a total of $1.2 trillion in unfunded liabilities.  For years CalPERS has been lying about their return on investment, claiming it to be 7.5%.  Instead in 2014-15, per State Senator John Moorlach, it is actually 2.4%.”

The pension overhaul bills the committee rejected were:

▪ Moorlach’s SB 1031, which would prohibit pension funds from providing cost-of-living adjustments to retirees if the pension fund has less than 80 percent of the assets it would need to pay the benefits it owes. Most retired public employees can receive cost-of-living adjustments of 2 percent each year, but some contracts allow up to 5 percent. Moorlach’s proposal would have applied only to state workers hired after Jan. 1, 2019.

▪Democrat Sen. Steve Glazer’s SB 1149, which would have allowed new state workers to opt for a 401(k) plan instead of a pension. The concept is attractive to younger workers who do not intend to be career civil servants. The University of California is offering a similar plan, and 37 percent of new workers are choosing 401(k) plans instead of pensions.

Which came first – the explosion of homeless on California streets, rivers, parkways and highways, or the unfunded pension crisis? Irresponsible politicians created both.

There is so much that’s wrong with California, but not so much that it could not be fixed if we could just rid ourselves of the irresponsible, selfish, malignant, unstable Democrats in government – the same Democrats who put labor unions over people, illegal aliens over citizens, and their own power over the well-being of their constituents. Even New York Magazine agrees: Democrats Must Be More Ruthless — When They Have Power – NYMag.