Is the Rot Unraveling in the Catholic Church? It appears this may be the case. But Pope Francis refuses to address this rot signifying that he is no leader. 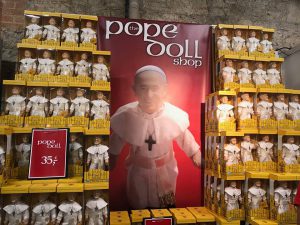 Evil thrives in an environment of permissiveness and appeasement, as we have witnessed in Catholic parishes and dioceses throughout America. However, good priests and bishops who tried to expose the rot were cast aside, accused of mental instability and ruined, and/or laicized.In Pope Francis’ encyclical on the environment in 2015, he very powerfully and emotionally attacks western nations for excessive consumption, which he then says is causing global warming. Imagine for a moment as you read the encyclical, the Pope instead spoke about clergy homosexuality and corruption, in place of climate change.Pope Francis’ quotes from his 2015 encyclical:

In this quote, remember that Pope Francis is speaking of climate change, and not about the boys and young men preyed upon by corrupt priests and bishops: “Will our generation be remembered for having generously shouldered its grave responsibilities?”

And remember when Pope Francis blasted the ‘Perverse Attitudes’ of climate change deniers? (He sounded more like Gov. Jerry Brown than a Vicar of Christ). Climate change is “one of the most worrying phenomena our humanity is experiencing,” Pope Francis wrote in a 2017 letter sent to world leaders gathered for the United Nations’ annual climate change conference. What a shame he did not address the “perverse attitudes” of predatory priests and bishops.

However, this deliberate, calculated diversion by Pope Francis is a tactic right out of the Communist Manifesto. His recent letter to Roman Catholics around the world condemning sexual abuse by Church officials and efforts to hide it was milquetoast compared to the passion he shows for man-made climate change.

The Evil of the Homosexual Priests and Bishops

It is man who allows evil in – not God, and not Catholicism.

Explosive news over the weekend came in the form of an eleven-page public statement from Archbishop Carlo Maria Viganò, former papal nuncio to the United States, that Pope Francis as well as that of Cardinals Wuerl, Sodano, Bertone, and Parolin knew about and covered up the abuses perpetrated by Cardinal Theodore McCarrick, OnePeterFive reported.

Yet, Pope Francis has refused to comment on this growing scandal, only increasing the calls for him to resign. The Pope, famous for his claims that climate change problems “are big and urgent,” and “solving climate change means protecting the planet and vulnerable people,” has never appeared to be at all concerned with the vulnerable boys and young men preyed upon by predatory homosexual priests, bishops and cardinals.

Viganò said that Pope Benedict XVI had previously imposed sanctions on Cardinal McCarrick, but Pope Francis lifted these sanctions from him in spite of knowing about McCarrick’s lengthy history of sexual assaults.

According to Diane Mongagna of LifeSiteNews, in an August 25 report, “Viganò personally spoke with Francis about the gravity of McCarrick’s abuse soon after his election in 2013.”

Aware that the pope was informed about the evil actions of McCarrick shortly after his election, Viganò has taken the unprecedented step of calling for his resignation. “Although he knew that he [McCarrick] was a corrupt man,” says Viganò, the pope “covered for him to the bitter end,” OnePeterFive reported.

Viganò said in the US, a “chorus of voices is rising especially from the lay faithful, and has recently been joined by several bishops and priests, asking that all those who, by their silence, covered up McCarrick’s criminal behavior, or who used him to advance their career or promote their intentions, ambitions, and power in the Church, should resign.”

“What happened to the straight men who were attracted to solid, doctrinal parameters?” asked Padre Peregrino in his blog. “They were kicked out of seminaries in the 1990s.”

In Parts l, ll and lll of my articles on the Conspiracy of Silence in Catholic Dioceses, I wrote about Fr. Jeremy Leatherby, formerly parish priest of Presentation of The Blessed Virgin Mary Parish, who was formally “suspended” by Sacramento Bishop Jaime Soto over dubious allegations of crossing “ministerial boundaries.”

Conspiracy of Silence in Sacramento Catholic Diocese , and

Fr. Leatherby has also not had the benefit of a hearing on his case, for more than two and one-half years. The Sacramento Diocese unconvincingly claims they are in weekly contact with his cannon lawyer, yet still no hearing.

As I’ve written, there is a cancer in the Catholic Church that needs to be eradicated. The cancer is not Catholicism, rather it is about the dangerous, corrupt behavior in far too many of the Bishops, including Sacramento Diocese Bishop Jaime Soto, who has been accused of shunning good and holy priests while protecting and covering for active, homosexual and predatory priests.

Cover ups of the most aberrant and illegal behavior by priests and bishops need to be treated as the crimes they are. It is time to admit that there is a homosexual subculture within the hierarchy of the Catholic Church which is directly linked to the sex abuse scandals.

The Harm Caused to Boys

“Gay men seem to hold a generational view that sex with teenagers is a rite of passage and a necessity as teenage gays have no other option to explore who they are. As a culture we seem unwilling to consider that what we experienced ourselves as teenagers should not be the acceptable norm, Chad Felix Greene wrote at HuffPo in a column aptly titled “What Happens When Men Have Sex with Teenage Boys.”

“These adult men are not guiding, helping, freeing or allowing these teen boys to explore who they are. They are abusing them,” Greene said, who is an openly gay conservative.

A Diocesan Priest wrote at Crisis Magazine.: “In my years of priesthood I have learned what the greatest good is for a bishop: to address as few complaints as possible. So, if a priest is having a gay affair, if he has a serious drinking problem, if he is sleeping around with women, if it is clear that he has mental disorders that inhibit him from overseeing a parish, if he is wicked and cruel, if he regularly abuses the liturgy, if he preaches heresy, if he contradicts the bishop, or if he teaches counter to the moral teaching of the Church, as long as there is no traceable record of complaint, or continual outcry from the people, then all remains the same, as long as the sins remain mostly occult. If a bishop can legally turn a blind eye, he will. Because otherwise, he may have to do something unpleasant.”

Meanwhile, on his trip to Ireland where he was met with a chilly response, Pope Francis dodged questions about the allegations that he knew of former Cardinal McCarrick’s abuse, and lifted sanctions that Pope Benedict XVI had imposed against the cardinal.

“Read the statement carefully yourselves and make your own judgment. I am not going to say a word about this,” Pope Francis said.

This Pope has repeatedly failed to hold abusers accountable, even accusing victims in Chile of slander and “calumny” when they spoke out.

Pope Francis must resign. He was all too aware of the molestation of young boys and young men by predatory, pedophile and homosexual priests, bishops and cardinals, yet continued to protect and even promote them. What exists now in the Church is not holy and must be eradicated. Arrests must be made, and prosecutions must begin. As Fr. Oko wrote in 2013, “The homosexual mafia in the Church must be dealt with in a very professional way. We must act like a prosecutor or an officer in the battlefield.”

The healing can only begin when good priests like Fr. Jeremy Leatherby are restored to their parishes.