Gov. Elect Gavin Newsom is casting some big #MeToo stones forgetting that his house is all glass.

California Democratic Party Chairman Eric Bauman has been accused of sexual harassment and assault. Staffers told the Los Angeles Times that during his time as party chair, Bauman, who is gay, would “regularly make sexually explicit comments in the workplace to men and women, including remarks about sexual acts, his and other staffers’ genitalia, and being sexually attracted to staff members,” CBS Los Angeles reported. 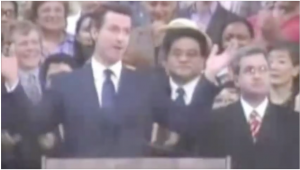 Calls for Eric Bauman to step down took a back seat as Bauman announced plans to seek alcohol abuse treatment… standard operating procedure for a Democrat. Never mind that 10 people have complained about his crude comments and inappropriate touching, and not his drinking.

Ironically, California’s Gov. Elect Gavin Newsom jumped on the bandwagon and also called for Eric Bauman to step down. “Gov.-elect Gavin Newsom is calling for the chairman of the California Democratic Party to resign in light of “very serious” sexual harassment allegations against him,” the LA Times reported.

This is ironic given that Gavin Newsom had his own #MeToo moments while he was San Francisco’s Mayor. In 2007 the San Francisco Chronicle reported, “For more than a year, the affair between San Francisco Mayor Gavin Newsom and the wife of his good friend and campaign manager, Alex Tourk, was a bomb that those around the mayor knew would one day go off.”

It wasn’t just his best friend’s wife – she was a staffer. Ruby Rippey-Tourk was Newsom’s appointments secretary at the time of the affair.

How did Newsom handle this explosive affair exposé? Newsom also declared publicly that he would seek treatment for alcohol abuse.

Rather than calls for Newsom to step down, Mr. Tourk, Mr. Newsom’s former deputy chief of staff and a close friend, resigned, the New York Times reported.

Even more irony: In 2007, some were predicting that his affair mess could put an end to Newsom’s well known ambitions for higher office.

Fox News had it right before the California June 2018 Primary when they published a story titled #MeToo movement gives pass to Democrats running for California governor. “Gavin Newsom had an inappropriate affair with his employee. Antonio Villaraigosa cheated on his wife with a reporter assigned to cover him,” Fox reported.

The only talk of Newsom stepping down came from Amanda Renteria, a Democrat who also ran for governor during the primary.

Renteria pointed out the double standard, “particularly among progressives who call out sexual misconduct in others.”

“This pattern of misconduct is completely unacceptable,” she said of Newsom, according to the Medium. “From Washington to California, citizens have begun calling out misuse of power wherever and whenever it happens. That’s why it’s time for Newsom to step down.”

Newsom did not step down, and now he’s about to be sworn in as California’s 40th Governor.

And that’s the way it is in California under corrupt, two-faced Democrat Party Rule. In 2004, barely one month in office, Newsom issued a directive to the San Francisco city-county clerk to issue marriage licenses to same-sex couples, and then famously said, “This door’s wide open now. It’s going to happen, whether you like it or not.”

Leading up to the 2008 election during the Proposition 8 campaign (the ban on same-sex marriage), Newsom’s “whether you like it or not” video was played over and over, likely helping passage of Prop. 8 —  only to be overturned by an activist Judge.

UPDATE: Eric Bauman resigned today. Gavin Newsom is about to be sworn in as Governor.