One of the questions that I get most frequently from media reporters about the 2012 elections in California is whether or not Republican can defeat incumbent United States Senator Dianne Feinstein.  Knowing that Feinstein’s polling numbers have been the lowest of her career, my response has always started with the quip, “Not if we don’t have a candidate.”

Elizabeth Emken may have the answer.  This former National Vice President for Autism Speaks has been quietly assembling a campaign infrastructure and preparing for a run against the incumbent of nearly twenty years.

I first came across Emken as a candidate for the Republican for the GOP nomination for Congress in the 11th District, held by Democrat Jerry McNerney.  While she didn’t win the GOP nomination in that race, she impressed me at the time. 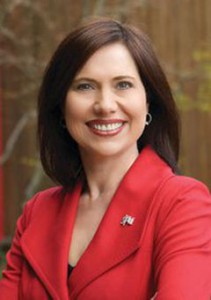 My first opportunity to sit down with Emkin was at the California Republican Party’s Fall Convention this year in Los Angeles.  I have to admit that I found her to be an impressive individual.  While drive and determination won’t win you a U.S. Senate race, they are certainly two necessary qualifications — and Emken has them in aces.

An articulate conservative, Elizabeth Emken has a strong background in financial management.  She earned her economics degree from UCLA in 1984 (though we wonder if she will still admit it after Saturday’s big game) and joined management at IBM, where she specialized in streamlining operations, creating efficiencies, and helping save the company millions of dollars in overhead.

While I haven’t vetted Emken on every conceivable issue (there are so many areas to discuss with candidates running for federal office), we did talk to her included opposition to tax increases, support for spending cuts, belief in limited, efficient government, and unabashed advocacy for the repeal of Obamacare.  (Check out this column she penned for us last year.)  On the issue of raising taxes to balance the budget, she will represent California in a much different way than DiFi, who is eager to increase our taxes.

One unique aspect to Elizabeth’s is her life’s passion — which is about helping children with disabilities such as autism.  She and her husband of 25 years, Craig, make their home in Danville, California, where they are raising their 2 daughters and 19 year old son, Alex, who has autism.  Like
most families of children with autism, Elizabeth found the lack of available information and research frustrating.
Most who have studied autism believe that some sort of environmental “trigger” was the catalyst for the current spike in autism in the United States.  For over a decade, Elizabeth has fought to bring a greater awareness and commitment to identifying the causes of autism.  During that time, she has made some impressive gains for autism research and advocacy, including securing, for the first time ever, placement of autism as a Presidential campaign issue.  In 2008, both major political parties included autism solutions in their national convention platforms and presidential debates.

She also conceived and created the www.AutismVotes.org website which now boasts over 100,000 qualified registrants, and is a central advocacy portal for information, media, legislation tracking and action alerts.  Autism Speaks’ Facebook page has over 1 million followers.

Elizabeth’s longtime advocacy for children will force Democrats to tear up their conventional playbook – that’s for sure.  In Emken is Feinstein’s ultimate foe, she (and her union allies) will have a challenge paint her as a strident, uncaring conservative.

Emken says she is committed to developing a broad foundation of donors and activists – all of whom would have ‘buy-in’ to the campaign.  She believes this broad base of support is what has been missing with Republican top-of-the-ticket campaigns over the past decade.
Here in California, Elizabeth will have to convince donors and activists that she can compete with the 3-term Senator, albeit one that is approaching 80 years of age and facing an anti-incumbent wave.

Emken has retained Premiere Strategies as lead consultants for her campaign.  Premiere Strategies is a new firm made up of some not-so-new veteran California politicos.  General Consultant is Tim Clark (formerly of JohnsonClark and ClarkDavis).  Clark was campaign manager for Steve Poizner’s successful run for Insurance Commissioner in 2006.  FR readers will recall that Poizner overcame an initial thirty-point deficit to defeat the popular Lt. Governor Cruz Bustamante and become the only non-incumbent Republican to win a down-ticket statewide race in the last 18 years.  Clark also oversaw State Senate Republican campaign strategy in 2010.  Emken’s campaign manager is Premiere’s Jeff Corless, handling day-to-day operations.  He was Carly Fiorina’s Deputy Campaign Manager/Political Director in her U.S. Senate campaign where he and his team oversaw coalition building and deployment of thousands of volunteers.  Jeff served for a period of time as Political Director as the California Republican Party, as well. Finance Director for the campaign is Joanne Davis.  Joanne, whom I have known for over two decades, is a veteran campaign fundraising expert.  She’s raised funds for Presidential and Gubernatorial campaigns, as well as for the RNC and Congressional campaigns.

For Elizabeth’s part, she’s ready for a tough fight.  She understands that she has to first become the choice of Republicans, and then take on an incumbent that political pundits have said is impossible.  She told me when we sat down that she’s made a career out of taking “impossible” to “inevitable.”

In my opinion, Republicans are not going to take out Feinstein by putting up as their standard bearer some random State Senator with a free ride, a term-limited legislator or a victim of redistricting.  Elizabeth Emken will be a candidate to watch.  Of course other potential candidates are likely to surface as well.  We’ll be watching this race as it develops…