The United Farm Workers labor union held a protest rally Monday in Fresno, outside the administrative hearing where Gerawan Farming is facing unfair labor charges. They are alleging that Gerawan Farming workers are intimidating witnesses testifying at the hearing. 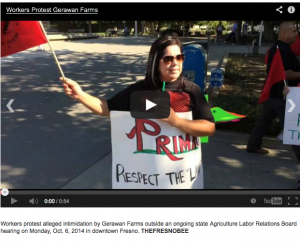 The intimation by the Bee is that Gerawan Farming is doing the intimidation.

There was nothing in the story about how the Agricultural Labor Relations Board and UFW are denying the right of thousands of Gerawan farmworkers to choose whether to be part of the union. The workers voted 11 months ago, but the ALRB will not count their votes. The real intimidation is the effort by UFW and ALRB to force a contract on the employees without first counting their votes.

“Gerawan has been accused by the state Agriculture Labor Relations Board of multiple unfair labor practices stemming from an election in November to decertify the union,” the Bee reported. “The election’s results have been sequestered until the hearing before administrative law judge Mark Soble is complete.”

“Gerawan company leaders and anti-union workers have said they don’t want to be part of the union and simply want their decertification election votes counted.” 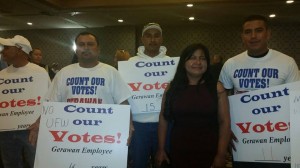 In February of this year, Gerawan Farming worker Silvia Lopez sued the gubernatorial appointees and regional staff of the ALRB alleging that their refusal to count the Gerawan farmworkers’ decertification votes violated her 1st and 14th Amendment rights. Almost immediately, the ALRB general counsel filed a motion to dismiss the lawsuit. In the decision handed down in July, U.S. District Court Judge Lawrence O’Neill ruled that Lopez’s allegations of violations against her 1st Amendment rights of association will move forward.

The UFW and ALRB claim the Gerawan farm workers are being intimidated and coerced by their employer. But nothing could be further from the truth. The fight against the UFW was completely organized by Silvia Lopez, and thousands of Gerawan employees. And they’ve made their issues quite clear — they don’t want UFW union dues taken out of their paychecks, and they don’t want the union to interfere with the excellent working relationship they have with their employer.

It is the Gerawan employees who collected signatures and demanded the ALRB hold a decertification election. Despite Lopez’s plight on behalf of the farmworkers for more than two years, the Legislature and the governor have been silent. “We don’t want the union — we want the right to vote,” Lopez told me. “We want to be heard!”

Why labor unions are anti-labor 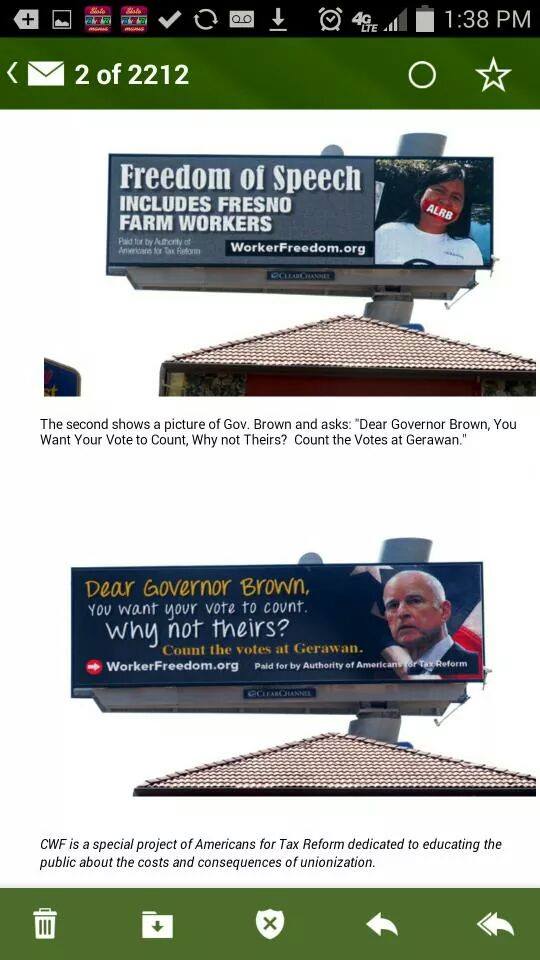 The United Farm Workers wormed its way into Gerawan Farming in 1990 when the labor union won an election to organize Gerawan workers – with barely more than 500 votes. But after holding one bargaining session, the union lost interest and never sealed the deal with a contract.

In October 2012, the UFW labor union, desperate for new members, reappeared out of the blue after doing nothing since 1990, to impose a union contract on Gerawan Farming and its 5,000 employees, requiring the workers to pay 3 percent of their wages in union dues. The UFW even threatened to fire workers who refused to enter into the agreement.

This incited the workers, who describe their working conditions as optimum. Gerawan farming pays high wages and benefits, including retirement, vacation pay and even the tuition for the workers’ children at the local Catholic St. La Salle School.

In the 1970s the United Farm Workers labor union was thriving with about 50,000 members. However, over the years, membership has dwindled to about 3,300. Prior to hitting up Gerawan Farming in 2012, the UFW was desperate for more income, having overspent its budget by more than $1 million. Targeting Gerawan’s 5,000 employees was clearly the easiest way to get an infusion of easy money.

But the UFW never counted on workers like Silvia Lopez, and the thousands of Gerawan employees who like their employer, and don’t want the union.