LAUSD Board Attempting to Influence Farm Workers’ Fight Against UFW

Why would a Los Angeles Unified School District board member ask the board to influence a legal battle between a large Fresno fruit grower and the United Farm Workers labor union? 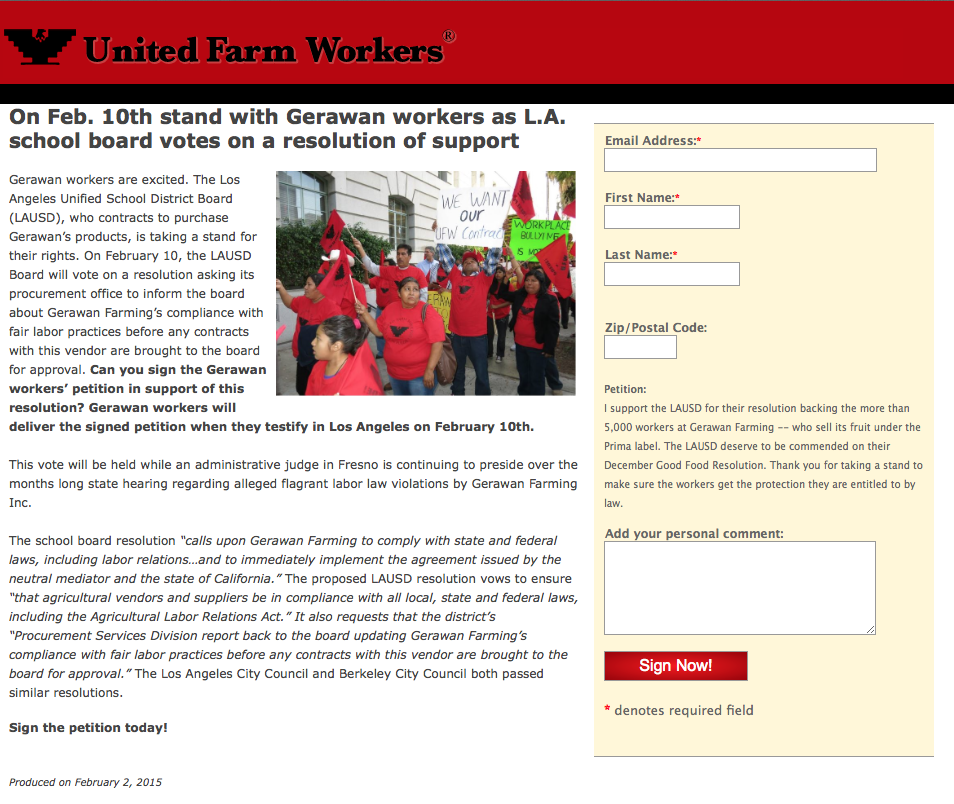 Rather than offer support to the Gerawan Farming company workers in their fight to oust the United Farm Workers labor union from their Fresno area farming employer, Steve Zimmer, a LAUSD  Board Member has authored a Resolution calling for Gerawan Farming to immediately implement mandatory mediation and collective bargaining, as ordered by the Agricultural Labor Relations Board.

I called Zimmer’s Chief of Staff, Claudia Vezcarra, and asked who wrote the resolution — Zimmer, or the UFW? Vescarra said, “We drafted it…” but added, “we are making some adjustments to it.”

I asked if Vezcarra would share what the adjustments are, but she declined. So I asked when these would be done. She said by Friday, and said she would call me.

The current wrangling between the Gerawan workers and the UFW labor union began in October of 2012, when the union showed up after a 23 year absence, and insisted that a collective bargaining agreement covering Gerawan workers be reactivated — even though there had been no union involvement with the workers for decades, and no contract ever ratified. Some of the workers then began a process for a vote to decertify the union.

The UFW has a history of involving outside help in the fight for control of the Gerawan employees. In July, the UFW elicited the help of two members of the Berkeley City Council, who called for a resolution and letters of support for the labor union, rather than the workers.

But there is no agreement between the United Farm Workers labor union and Gerawan Farming, and no evidence the UFW ever even attempted good faith negotiations with Gerawan nearly 25 years ago.

Gerawan Farming did not attempt to decertify the UFW; 2,600 of its employees held an election, one of the largest decertification elections in history. However, the ALRB refuses to count the workers’ ballots from that election of Nov. 2013.

LAUSD Board member Zimmer’s Resolution said Gerawan Farming has had contracts with the District and is currently under consideration for further contracts. But according to a letter obtained by the Flash Report written by farming company owner Dan Gerawan, the grower has never had contracts with LAUSD. Gerawan’s letter was sent to Mr. Zimmer, and copies sent to the entire LAUSD Board.

Yet on February 2, the UFW posted a notice about the LAUSD resolution on its website:

“Gerawan workers are excited. The Los Angeles Unified School District Board (LAUSD), who contracts to purchase Gerawan’s products, is taking a stand for their rights. On February 10, the LAUSD Board will vote on a resolution asking its procurement office to inform the board about Gerawan Farming’s compliance with fair labor practices before any contracts with this vendor are brought to the board for approval.

“It appears to be the latest effort by Zimmer to use LA Unified’s contract negotiating power to put pressure on the food industry for changes in the way it grows food, treats animals and treats workers,” the LA School Report said in a January story.

“The effects of this could be quite far reaching,” Zimmer told LA School Report recently. “We do intend to use the contracting process to leverage important changes in the large agricultural industry.”

However, this is the same language used by the Berkeley City Council in its resolutions.

The first recommendation for UFW support came from Berkeley Councilman Kriss Worthington in July. “Support the United Farm Workers by sending letters to Wal-Mart requesting it upholds its own ‘Standards for Suppliers’ and to Gerawan Inc. urging it to protect and aid its underpaid agricultural workers,” Berkeley Councilman Kriss Worthington said in a letter.

Council member Jesse Arreguín also wants the Berkeley council to adopt a Resolution calling upon Gerawan Farming “to meet basic standards of conduct, including refraining from violating state or federal laws such as labor relations laws, anti- discrimination laws, and minimum wage and hour laws, and to immediately implement the union contract issued by the neutral mediator and the state of California.”

Gerawan Farming attorney David A. Schwarz sent his own letter to the council members and Mayor of Berkeley pointing out that Berkeley’s council members, in their zeal to support the labor union, got a few facts wrong.

The resolution proposed by Arreguín not only ignored a letter sent by Schwarz in July, the wording of their many incorrect accusations are word-for-word identical defamatory statements made in UFW press releases and statements, and in mass mailing donor solicitations.

In 2013, Zimmer received an endorsement for his bid for LAUSD board from Dolores Huerta, co-founder of the United Farm Workers. Dolores Huerta is also a well-known committed radical, and honorary chairwoman of Democratic Socialists of America, and has served that organization or its predecessors for nearly 40 years.

“You have drafted an inaccurate and misleading Resolution for your col- leagues’ consideration at the Governing Board of Los Angeles Unified School District’s meeting on February 10, 2015,” Dan Gerawan said in his Feb. 2 letter to Zimmer. Dan Gerawan said Zimmer failed to contact anyone in Gerawan Farming, and said the Resolution ordering LAUSD Procurement Services Division to take any action regarding Gerawan Farming “is a complete waste of LAUSD’s valuable time and resources.”

“The LAUSD Resolution omits the most important aspects about the United Farm Workers’ actions, recent court rulings, and massive protests of thousands of farmworkers against the UFW and the ALRB’s efforts to impose a so-called contract,” said Gerawan.

I have been covering the Gerawan workers’ story since 2012, and can attest to the facts as explained by Gerawan:

Even more importantly, the state appellate board ordered in November a stay against any and all efforts to impose the contract while it conducts its review.

As important to note: