The United Farm Workers labor union is either lying about how many members it really has, or is boastfully counting future farm worker members, while assuming it will win the fight over the workers. 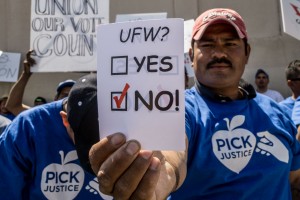 Gerawan employees at a protest April 15

Gerawan Farming employees are under assault by the United Farm Workers labor union, the California Agricultural Labor Relations Board, and by Democratic politicians up and down the state.

The workers don’t want to be members of the UFW, and held an election in 2013 to officially decertify the labor union. But the ALRB locked up the workers’ ballots, refused to count them, and has instead assisted the UFW in its takeover attempt.

Gerawan Farming is a third-generation family farming operation, growing peaches and grapes in the Fresno area. The farming company is well known as a favored employer, and currently employees 5,000 workers. Gerawan has a history of paying the highest wages and compensation package in the industry, according to the many employees I’ve spoken with.

It is apparent the UFW labor union is trying to gain what they can no longer win through the secret ballot process and sincere labor negotiations with agriculture employers.

The UFW labor union boasted 50,000 members by the end of the 1970s. But the United Farm Workers has come under hard times since legendary co-founder Cesar Chavez died in 1993. As the Nation magazine reported in 2012, mismanagement has caused the union’s membership to nosedive from a peak of 50,000 to less than 3,500. Forcing Gerawan’s workers into the UFW would almost double the union’s size.

According to the UFW’s Labor Organization Annual Report filed with the U.S. Department of Labor, as of Dec. 31, 2012 the UFW reported a record low 3,329 active members with voting rights and 1,052 retirees with no voting rights at the end of 2012. 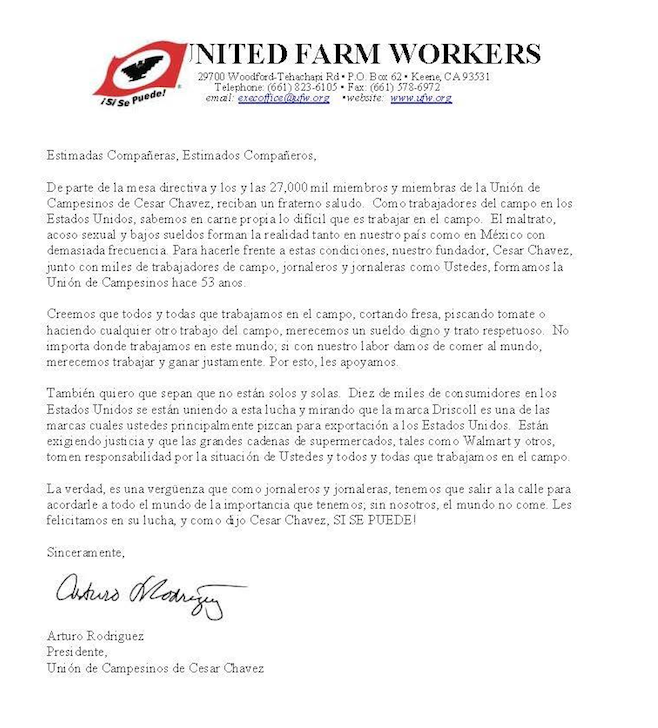 The UFW declined by more than 90 percent.

So it was no coincidence when in 2012, the UFW showed up after a 20 year absence at Gerawan Farming claiming the 5,000 farm workers were union members, and needed to start paying 3 percent of their paychecks to the union.

Despite officials reports showing the drop in UFW membership, UFW President Arturo Rodriguez said in a recent letter to farmworkers in México that there are 27,000 members in the UFW.

In this 2012 youtube video of UFW National Vice President Armando Elenes, attacking Gerawan Farming and other growers, he claims the UFW represents more than 30,000 workers: https://youtu.be/TCO7kHIG4qg

Suspiciously, between the 2012 and 2013 union report, the UFW membership report shows a spike in membership, from 4,443 to 10,278 members. Many wonder if the UFW is already counting the Gerawan workers.

If the UFW really has 30,000 members, why force itself on the Gerawan workers so aggressively? (rhetorical question)

In order to breathe new life into the union, it is evident that the ALRB and UFW have joined forces to reverse this downward anti-union trend by targeting one of the biggest non-union farming operations in the state. Should they eventually succeed in unionizing Gerawan Farming employees, adding the 5,000 farmworkers would double union membership, and boost the ALRB’s status.

Because the ALRA already provides many of the worker protections that previously needed to be negotiated in union contracts, the UFW isn’t needed for worker protections. But that isn’t stopping the labor union or ALRB.

Rather than offer support to the farm workers in their fight to oust the UFW from Gerawan Farming, the Berkeley City Council, San Francisco Board of Supervisors, Oakland City Council, and Los Angeles Unified School District voted and called for letters of support for the UFW.

The liberal busybodies on the San Francisco and Berkeley Councils, and LAUSD, inserted themselves into a labor issue hundreds of miles and multiple counties away.

And last year, news outlets were giddy with the California Latino Legislative Caucus’s tour of the illegal immigrant detention facilities at the Ventura County Naval Base “to inspect the care immigrants are receiving.”

These same California lawmakers have ignored the plight and pleas for help of thousands of Latino farm workers who have been fighting for several years to decertify the UFW, and the state Agricultural labor Relations Board.

Ironically, this same group of people – Hispanic farm laborers – are the very demographic the Democratic Party is so eager to register to vote in local, state and national political elections. But when it comes to the farm workers not wanting to work under an oppressive union contract, state elected Democrats are silent.