They don’t come any better than Peter Hannaford.

This week the Republican Party lost one of its giants.  Peter Hannaford, a man whose long list of accomplishments included serving as a senior adviser to Ronald Reagan both in Sacramento and in Washington, has passed away. 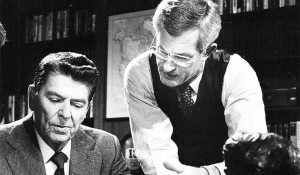 When I decided to run for Lt. Governor of California last year, one of my first calls was to Peter Hannaford to ask him to serve as Chairman of the campaign.  During the nine month undertaking, Peter demonstrated the kind of keen insight and cool strategic thinking that served him so well over the course of his career.

Born in Glendale in 1932, Peter Hannaford earned his degree in English at U.C. Berkeley in 1954.  That degree proved useful as Peter embarked on what became a distinguished career that led to his role as director of public affairs in the office of Governor Reagan, and later as senior communications adviser in Reagan’s successful 1980 campaign for President.  In between, he and Mike Deaver developed the plan to keep Reagan in the public eye after he left the Governor’s office, setting the stage for becoming the Republican nominee.  Peter even ran for Congress from the East Bay in 1972, and even though he ran more than 10,000 votes ahead of President Nixon in that district, Democrat Ron Dellums prevailed.  That loss may have been a blessing in disguise, for had he won he might never have taken on the critical role he played in the Reagan campaigns of 1976 and 1980.

Hannaford is the author of no less than five books about Ronald Reagan, plus numerous others concerning politics and the media.  I’m currently reading his fascinating 2012 book Presidential Retreats, which tells the stories of America’s presidents through the lens of their presidential retreats, ranging from Mount Vernon (Washington) through Sagamore Hill (Theodore Roosevelt), Rancho del Cielo (Ronald Reagan) and beyond.

Even in retirement, Peter remained actively committed to advancing the ideals that brought he and Reagan together.  He served as Chairman of the Republican Party of Humboldt County, and even the editorial page editor of the Eureka Reporter.

Perhaps what impressed me most about Peter Hannaford was his crisp advice and cool demeanor drawn from his more than 40 years in politics and the media.  During the Lt. Governor campaign, the opportunities I had to sit down with Peter and share in his wisdom and formidable insight are among my most cherished memories of that campaign.

On more than one occasion Peter recited Reagan’s instruction to his staff in advance of major events: “No bad performances.”  Peter’s life performance ended unexpectedly on the evening of September 5th, 2015 and it was a grand one indeed.  His standard for ethics, diligence, and wisdom sets a high bar for those of us who remain to continue to champion this great cause on behalf of a great nation.