The recent Paris World Climate Summit, a gigantic diversion, allowed cowardly world leaders, and the cowardly mainstream media to avoid dealing with the skunk on the table – Islamist Terrorism. The cowardly Obama administration led the way to consensus of an international climate change treaty at the Paris Summit, which will do little or nothing to reduce carbon (also known as plant food). 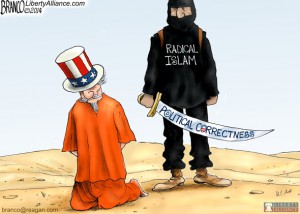 Terrorism in America brought to you by Political Correctness. Political cartoon by A.F.Branco ©2014

The response following the Paris attack, and more recent San Bernardino attack, from the mainstream media, clearly synchronized with the Democratic National Committee, has been woefully ho-hum, demonstrating contemptible levels of cowardice.

And instead of hunkering down and reassuring Americans that our government and military will protect us, Obama shifted his fourth-grade attention span to climate change.

This faux-Treaty will only serve to decrease fossil fuel use in developed countries, while extorting billions more from the pockets of U.S. and European taxpayers, for redistribution to developing countries.

Who are the Fascists?

While the liberal left calls Middle America ‘Fascists’ for supporting Donald Trump for President, Hollywood just made a movie celebrating the Stalin-loving screenwriter Dalton Trumbo. The movie reveres Hollywood’s communists and fascists of the 1950s, portraying them as victims, rather than perverse defenders of Communist leaders who butchered millions of Jews, blacks, gays, Christians, and nonconformists.

Only days ago, the Sacramento Bee editorial board referred to climate change as a “battle,” instead of terrorism, and proclaimed, “but with the approval of the landmark global climate accord this weekend, the world can celebrate progress in at least one important battle: From government leaders to big business to financial markets, no one can seriously deny the shared urgency on global warming.”

Global warming is urgent; terrorism, not so, according to the Sacramento Bee brain trust.

In Tuesday’s editorial, they wrote, “The anti-Muslim bigotry sweeping the country in the wake of the San Bernardino massacre is un-American, pure and simple, and should be denounced by people of conscience everywhere.”

It is important to point out that the Sacramento Bee editorial board routinely denounces long-held American values and traditions. For the board to now claim the responses to terrorist attacks on our soil as “un-American” is just hypocrisy and fraud. They don’t adhere to or honor American values.

The mainstream media are cowards with pens and laptops. “If there were a real press in this country, someone would ask Obama how it is that he became the first president to host a Rose Garden celebration for a deserter,” Mark Steyn recently wrote about Army turncoat Bowe Bergdahl.

If there were a real press in this country, someone would ask the cowardly Obama and the equally cowardly California Gov. Jerry Brown how long they plan to to avoid discussing Islamic ideology. Or is the plan to sit around ineptly waiting for the next horrific attacks, which these same politicians and the media will again insist have “nothing to do with Islam?”

America in Shambles
A quick look around the country exposes the failures of dangerous leftist ideology in the hands of incompetent, leftist zealots like Barack Obama and Jerry Brown; it’s intolerance and tyranny on parade.

Textbook examples are the ridiculous crusades we have been witnessing on college campuses, where craven administrators have cowed and appeased and apologized to illiterate, misinformed, unschooled students who violate every tenet of free speech – as do many of their professors and administrators.

Colleges and universities in the United States have become so intolerant of dissent, teachers and administrators are willing to use or threaten force to impose their ideology on others – such intolerance and tyranny.

Then there were the Pakistani Muslims Tashfeen Malik and Syed Farook who just killed 14 Americans in San Bernardino, CA, in the largest terror attack on U.S. soil since Sept. 11, 2001. For those unfamiliar with Pakastani Muslims, the majority of surveyed Pakistani allies grieved for Osama Bin Laden, and a plurality viewed the mass murdering jihad terrorist as a jihad martyr, or “shahid,” according to Andrew G. Bostom writing for American Thinker.

In a major speech on May 23, 2013, President Barack Obama said, “there have been no large-scale attacks on the United States” since the start of his presidency.  He made that statement following the Fort Hood attack and the April 2013 terror attack, when Chechen brothers Dzhokhar Tsarnaev and Tamerlan Tsarnaev exploded two pressure cooker bombs during the Boston Marathon, killing three people, and injuring an estimated 264 others, 17 of which had limbs blown off.

Then there are the many public schools across America which have required students to “become a Muslim” for a period of time, choose a Muslim name, recite Islamic prayers, participate in imaginary pilgrimages to Mecca, perform ritual fasting, dress in Muslim clothing, and recite Arabic phrases meaning “God is great.”

Even Qatar, our ally, has imposed a new ban on Christmas celebrations at preschools.  It is clear that the ban is based on Qatar’s governance by Sharia law, according to news outlet al-Araby, in Christmas isn’t halal enough for Qatar.

“In the United States, we’re constantly hectored by the liberal Left and the education establishment that we need to be ‘inclusive’ and ‘non-discriminatory,’ but that’s not what Sharia teaches,” said a colleague.  “When Sharia comes to the U.S., public displays of Christmas will be banned not because of worries of offending non-Christians, but because Islam can brook no diversity.  And Qatar is supposedly one of our allies and a ‘moderate’ Islamic country.  I’ve been to Qatar and I liked the place, but let’s not kid ourselves — their rules are not our rules, and we need to fight for our rules,” he said.

Gov. Jerry Brown promoted government regulation at the climate talks in Paris.  At an event with hedge fund billionaire environmentalist Tom Steyer, Brown said, “Tom, you used the phrase ‘policy.’ Good policy. But I want to unpack that term a little bit. Inside the policy, you need a law. You need a rule. You need the coercive power of government to say, ‘Do this.’ Now, you have to be wise and don’t say something stupid or order something stupid but the fact is, the regulations supported by the laws drive innovation.”

The Sacramento Bee reported that Brown urged the crowd to “never underestimate the coercive power of the central state in the service of good. You can be sure California is going to keep innovating, keep regulating,” Brown said. “And, shall I say, keep taxing.”

My favorite comment in the Tuesday Republican Presidential debate came from Ted Cruz: “All nine of the people here tonight would make an infinitely better president than Barack Obama or Hillary Clinton.”

Most of America agrees.