Confirmation of Genevieve Shiroma to the Corrupt ALRB Flies Through Senate 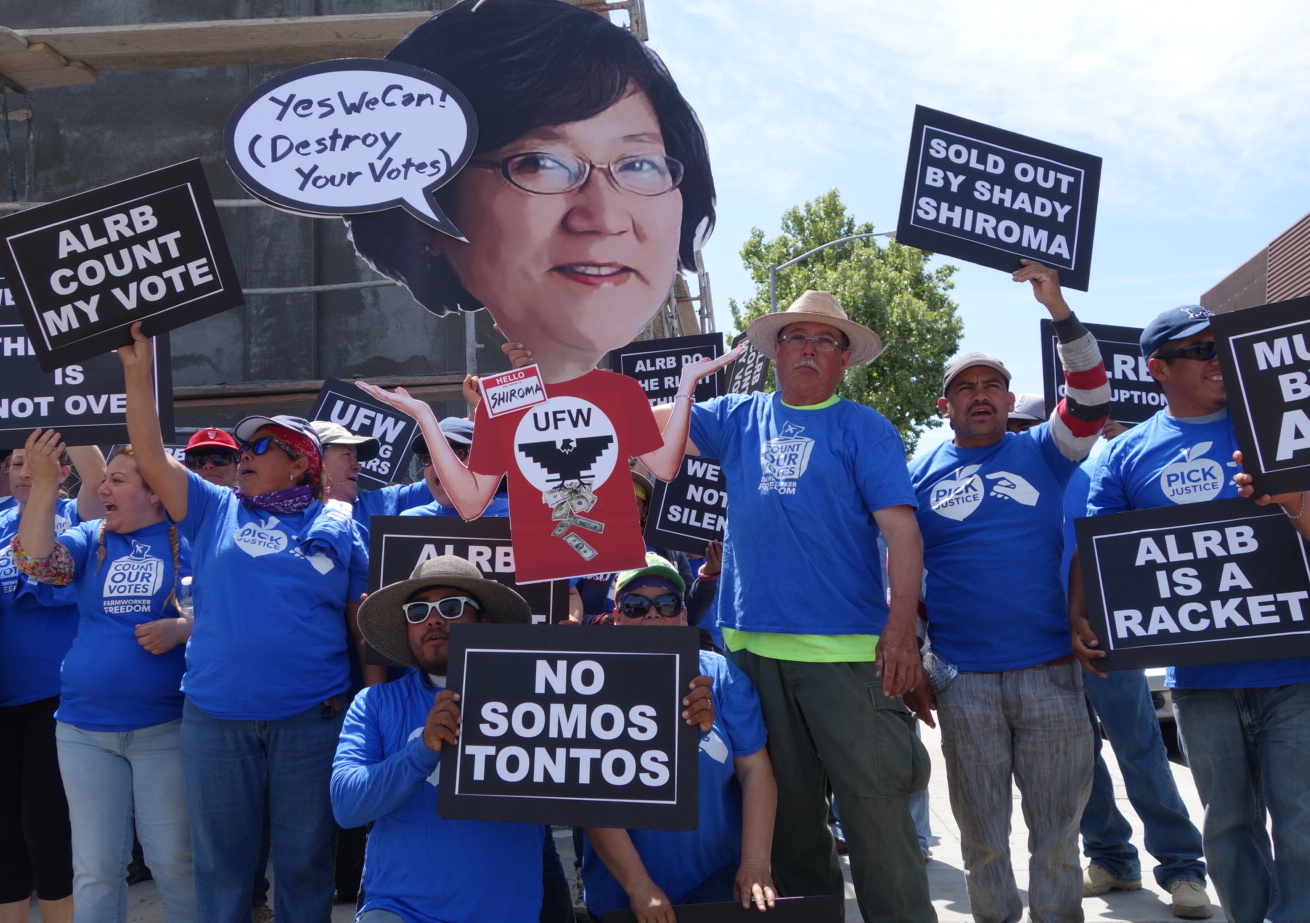 Despite damning evidence of bias, and the disgraceful behavior of a state official who sits in judgment of others, the State Senate confirmed Genevieve Shiroma’s reappointment to the state Agricultural Labor Relations Board 26-11, once again proving the Democrat Party is no longer Democratic.

In California, the Democrat Party now adheres to Joseph Stalin’s rule book. In April Shiroma, one of the three-member California Agricultural Labor Relations Board, voted to set aside their own November 5, 2013 decertification election of the United Farm Workers at Gerawan Farming, and destroy the Gerawan employees’ ballots. Yet the Democrat-run Senate just voted to confirm her reappointment to the ALRB.

Gov. Jerry Brown’s appointee has managed to survive a mountain of opposition to her reappointment to the Ag Labor Board. Thousands of vocal opponents say she’s violated conflict-of-interest laws; the United Farm Workers labor union’s lobbyist is also her campaign manager. She has failed to assist farmworkers – especially as the Agricultural Labor Relations Board has spent $10.8 million to prevent Gerawan Farming Company workers’ 2013 votes to decertify the United Farm Workers labor union from being counted – more than $4,100 per vote to deny farmworkers their legal rights to be heard.

In effect, the ALRB is working overtime to deprive Latino farm workers their right to vote on labor union representation. So the workers have taken to the streets, protesting ALRB meetings and offices to let the Board know they don’t appreciate being treated like second class citizens.

At a June 23 hearing before the Senate Rules Committee, hundreds of farm workers waited in a long line out the hearing room door, “and around the block,” to give testimony in opposition to the re-confirmation of Genevieve Shiroma as a member of the Ag Labor Board. Not one person attended the hearing in her support.

The testy and contentious confirmation hearing before the Senate Rules Committee for Shiroma, a 17-year member of the California Agricultural Labor Relations Board, ended after extensive testimony with a proverbial “F-you” to farm workers, when elected lawmakers voted 3-2 along party lines to confirm Shiroma.

Following the Rules Committee approval, Shiroma’s confirmation went to the full Senate for a vote Thursday.

Senator Andy Vidak, R-Hanford, made an articulate, blistering floor speech in the Senate in opposition to Shiroma’s confirmation. As I have pointed out in article after article for four years, Vidak also identified Shiroma’s blatant conflict of interest, the ALRB’s dismal performance under Shiroma’s tenure, and the ALRB’s failed mission to assist farmworkers under Shiroma’s leadership.

ALRB board member Shiroma hired United Farm Workers labor union lobbyist Richie Ross for her personal campaign the same year he successfully lobbied passage of the ALRB’s California Mandatory Mediation and Conciliation Statute. The MMC law empowers the board to write and force contracts on employers and workers.

“Ms. Shiroma has a longtime business relationship with a lobbyist and consultant for the UFW,” Vidak said. “She was asked to recuse herself from the ongoing case involving farmworkers at Gerawin Farms wanting to decertify the UFW. At her confirmation hearing, Ms. Shiroma not only refused to recuse herself, but actually cast the deciding vote on the board declaring that she didn’t have a conflict of interest. Talk about your Kangaroo courts.”

Richie Ross, a long-time Democratic campaign consultant and lobbyist, has decades-long ties to the United Farm Workers labor union, working as its lobbyist until 2013.  Ross was also a strike organizer for the UFW. His daughter Esperanza Ross is also a UFW lobbyist.

Ross was hired to do work for the California Legislative Democrat Caucus, by various Assembly Speakers.

Ross has had many brushes with state law surrounding his work as a political campaign consultant for candidates, and then lobbying the lawmakers he got elected.

“Silvia Lopez, a San Joaquin Valley farm worker, filed legal documents detailing payments over $120,000 from Shiroma to United Farm Workers’ Lobbyist Richie Ross, and documented Shiroma’s financial support of the author of a bill designed to help the UFW force itself on workers,” said Anthony Raimondo, the attorney who represents Silvia Lopez in a petition to disqualify ALRB Board Member Genevieve Shiroma for bias and conflicts of interest, including close political ties with the United Farm Workers union.”

The UFW labor union has been trying since 2012 to force itself on the 5,000+ employees at Gerawan Farming Company where Lopez works. Lopez has fought for several years for her co-workers’ right to vote to oust the union.

“Shiroma made the payments to the UFW’s lobbyist while she sat in judgment of issues directly involving that union, and while the workers ballots remain uncounted in a government vault,” Raimondo said.

The complaint details payments Shiroma made to the union’s lobbyist for both her personal election campaign and SMUD campaigns. Ethical rules require judges to disclose relationships with the parties before him or her, and Shiroma failed to disclose her political entanglement with the UFW. Shiroma first hired Ross the same year he successfully lobbied for passage of legislation to empower ALRB to write and force contracts on employers and employees against their will.

On the ALRB’s failed mission to assist farmworkers, Vidak said:

The ALRB is charged with assisting farmworkers who want elections to decide which union they want or if they don’t want union representation at all. The farmworkers at Gerawin have repeatedly voted to not have union representation. Unfortunately the ALRB has turned its back on farmworkers and now sees its number one job as being a shill for the UFW.  Additionally,  two years ago this legislature voted to bail-out the UFW’s failed health care program with $3.2 million – how many other unions have we done that with? Ms. Shiroma and the ALRB have looked for every technical reason not to count the farmworkers’ votes – basically disenfranchising the votes of thousands of primarily Latino and Latina workers.
The ALRB, in the eyes of thousands of my constituents, has become corrupt and is not helping the people at the bottom of the political chain, as was the original intent. I have frequently worked side-by-side with farmworkers throughout my life.  It is a tough job, a hard job, a back-breaking job.  They have earned the right to determine their own destiny, not to be treated like children who do not know what’s best for them.

Ms. Shiroma has been on the ALRB for 17 years, including multiple years as chair.  The state Department of Finance did a five year audit of the ALRB and found money being wasted, lack of organization and employee dysfunction. Ms. Shiroma had no real answers to these questions other than “following practices set by previous boards.” Furthermore, there are less and less cases coming before the ALRB but yet their budget has doubled in the last five years – where’s the money going?  Unfortunately we now know 40 percent has been going to persecute Sylvia Lopez and farmworkers at Gerawin Farms. Ms. Shiroma bears much of the responsibility for the ALRB mess as the longest-tenured member of the ALRB.

“Her [Shiroma’s] relationship with the UFW’s lobbyist, who is also her campaign manager, while not illegal, creates the perception, within the agriculture industry that she cannot be fair and balanced.” Berryhill cited ALRB’s disregard of Gerawan Farming’s employees in favor of the UFW as an example of Shiroma’s bias. “Impartiality and lack of bias are the building blocks of the entire ALRB process…. When folks – on either side – lose faith in the ability to get a fair hearing, the process doesn’t work.”

Sen. President Pro Tem Kevin de Leon acknowledged Shiroma did not pass the Senate Rules Committee on a bipartisan vote, “but nonetheless, I strongly recommend her confirmation to continue her advocacy and to do the right thing for the agricultural workers, as well as the industry,” he said.

Sen. Richard Pan, D-Sacramento was the only other Senator to speak on Shiroma’s behalf. He said he had the opportunity to work with her in the Sacramento community, and “found her to be very fair, a good listener, a person very well respected, who works well of course with the labor community, but also the business community, and is well respected by people here.”

I guess Pan wasn’t listening to how the ALRB forced the Gerawan workers into Mandatory Mediation and Conciliation… or the multiple legal cases filed against the ALRB… or Judge Hamilton’s Superior Court decision saying it was clear the ALRB and UFW were “in cahoots.”

Shiroma and the ALRB’s Stalinist, elitist view is that farmworkers are too ignorant or stupid to be able to think on their own, and need corrupt politicians to meddle in their relationship with their employers. Meanwhile, Gov. Jerry Brown, who at any time could have stopped the Agricultural Labor Relations Board had he wished, has ignored the thousands of California farm workers who don’t want to be unionized by the UFW. He even authorized gifting the financially floundering UFW labor union $3 million each year for the next five years toward their Obamacare health plan.

There are nearly one million farm and agricultural workers in California, yet the United Farm Workers labor union represents less than 4,000 of them. Still, Jerry Brown continues to help the UFW limp along, assisting the union to terrorize well-run, law-abiding, decent farming businesses with countless lawsuits, and harassing them with unreasonable and illegal demands.