California Democrats are rushing a bill through to restrict local law enforcement from cooperating with federal immigration authorities on criminal illegal aliens. Why? Out of little or no concern for the welfare of immigrants, most say illegal immigrants are the Left’s most reliable voting bloc, especially in California where illegal aliens can obtain a drivers license and vote. 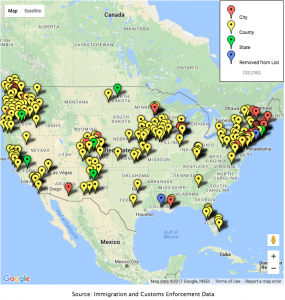 In a Fox News interview regarding Sanctuary cities in California and the recent riots at University of California, Berkeley, president Donald J. Trump warned over the weekend, “If we have to, we’ll defund. We give tremendous amounts of money to California.”

Despite a University of California, Berkeley study of more than 1,000 Californians, which found 74 percent oppose sanctuary city policies, legislative Democrats are pushing SB 54 to restrict local police and sheriffs from assisting or cooperating with federal immigration authorities… and despite that the UC Berkeley study results included 73 percent of Democrats and 65 percent of Hispanics.

At what point did it become legally acceptable for elected officials to admit publicly that they or family members are not in this country under legal circumstance, and their family members may have committed federal crimes including crossing the border illegally, multiple counts of identity theft and falsification of federal records?

President Donald J. Trump has warned California lawmakers the federal government can and will likely pull federal funds from Sanctuary cities, and perhaps the entire state should this bill pass, making all of California a sanctuary for illegal aliens.

“SB 54 dangerously lumps violent, hardcore undocumented criminals in with millions of hard-working immigrant families,” Sen. Andy Vidak, R-Fresno, said in a statement. “Families in the undocumented community are particularly scared that De León’s actions will protect predators who prey on their children, the elderly and other vulnerable folks in their neighborhoods.”

Officials in sanctuary cities flaunt federal law, while creating an asylum to criminal behavior. Criminals prey on illegal aliens knowing of their reluctance to report crime out of fear of being found out. And sanctuary policies victimize innocent Americans by enabling illegal aliens to commit untold crimes, which never would have occurred had the criminal illegal aliens been deported as they should have been.

“Jessica Vaughan of the Center for Immigration Studies analyzed Immigration and Customs Enforcement (ICE) records and found that during just one eight-month period in 2014, sanctuary jurisdictions released more than 8,100 deportable aliens,” Hans Von Spakovsky reported in National Interest. “Of those, 62 percent had a prior criminal record; 3,000 were convicted felons. Of those released, 1,900 were later rearrested a total of 4,300 times on 7,500 different offenses. As Vaughan says, ‘when local jurisdictions shield aliens wanted by the feds, the aliens can commit more crimes.’”

The Trump administration is about to embark on a multi-billion dollar infrastructure-building program on highway and bridge repairs throughout the country. California is risking losing the funding for the much-needed roadwork, as well as billions in federal aid for education, welfare and numerous other programs totaling more than $300 billion.

According to the Immigration and Customs Enforcement agency, nearly 300 jurisdictions in the United States have been identified as Sanctuary Cities, with non-cooperative policies, and obstructionist immigration enforcement. The attached map shows which ones.

Demonstrating the illegal alien hysterics, this actual headline in The Sacramento Bee exposes the media: “Will California become sanctuary state under Trump? “

“I don’t want murderers, rapists, child molesters, or armed robbers protected by the state to be returned to our neighborhoods,” Anderson said after the hearing.  “What I’ve heard from the majority of my constituents is that their values include respect for the law and protecting the innocent. I share those values. Imposing sanctuary policies that protect criminals on all Californians do not reflect our values.”

Sen. Anderson has a petition in opposition to making California a sanctuary state on his website, at Anderson.CSSRC.us.

Read my recent article on SB 54 and the hearing: