Can Assembly GOP Rescue Titanic After Captain Steers Into Iceberg?

The Assembly Republican Caucus failed on Monday to vote to oust its weak-kneed turncoat leader Chad Mayes. His failure to lead on the disastrous cap and trade manipulations and vote, allowed the cap and trade program to be voted on prematurely by two years, saved and extended a decade. 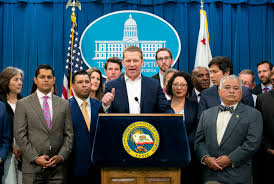 A leader would have demanded an audit and hearings on the program, and never allowed cover to Democrats in targeted districts fearful of the disastrous vote. As Flash Report publisher Jon Fleischman explained:

Ironically the piece of the multi-billion dollar cap and trade deal that places a referendum before voters next June (ACA 1), ostensibly to impose fiscal discipline on the program, permanently enshrines references to cap-and-trade in the state constitution. And it was authored by Republican Mayes.”

I’ve described Mayes and his traitorous six as Neville Chamberlains — “Peace for our time,” after Chamberlain’s meeting with Hitler in Germany. Specifically, Monday’s vote to not remove Chad Mayes can only be characterized precisely like the famous “Norway Vote” against Neville Chamberlain — a momentous debate in the British House of Commons during World War II in May 1940 — where the famous words “”You have sat too long here for any good you have been doing. Depart, I say, and let us have done with you. In the name of God, go” were spoken.

Over a quarter of conservative members voted with the opposition or abstained, and made it clear that support for Chamberlain in his own party was crumbling. The day that Nazi Germany invaded Belgium and the Netherlands, Chamberlain resigned and was succeeded as Prime Minister by Winston Churchill.

Even though Chamberlain “won” on debate day, he was soon outside, and replaced by a true Lion, Churchill. Monday’s actions in the Assembly Republican Caucus give exactly that historical parallel.

But can this awakening happen in California?

The “cap” in cap-and-trade is the legal limit on the quantity of greenhouse gases a business can emit each year, and “trade” means that companies can swap or trade emission permits among each other. Yet how does this reduce “dangerous” carbon emissions?

The Answer is, Not at all.

The drama in the California State Assembly Republican Caucus over the traitorous vote by seven Republican Assembly members to extend the Cap and Trade program beyond the 2020 expiration date found many state Republicans calling for the ouster of Assembly Minority Leader Chad Mayes.

In case you were traveling in outer Mongolia earlier in the month, the recently publicly exposed affair between current Republican Assembly Leader Chad Mayes and former Republican Assembly Leader Kristen Olsen, by Olsen’s estranged husband Rod, led many to believe Mayes’ 180-degree pivot on climate change was related to the affair. Mayes led the effort of the seven Republicans to vote with Democrats on the passage of the extension of the Cap and Trade program – something Gov. Jerry Brown wanted very badly for his legacy before he leaves office in 2018.

Why Force the Early Vote on Cap and Trade?

The cap-and-trade program is largely a massive tax on California businesses deemed polluters by anonymous bureaucrats at the California Air Resources Board hell bent on seizing unearned power. The cap and trade program has already taxed $4.5 billion on the private sector in only four years, and has illegally become the funding source for Governor Jerry Brown’s high-speed train.

These treasonous Republicans didn’t just reach across the aisle and vote with Democrat pals – these Republicans provided cover for three Assembly Democrats in targeted seats, who were too chicken to vote for the awful cap and trade extension, and then face voters.

The costs of cap and trade taxes are passed on to the consumer in the form of higher costs for nearly everything, including our skyrocketing utilities, gas for our vehicles.

CA Reps Are Deaf: Other Countries Are Also Killing the Golden Goose

Interestingly, Australia is suffering more blackouts recently, as coal plants are decommissioned and shiny renewable installations fail to deliver, Watts Up With That reported. “The problems are self inflicted. It is ridiculous that Australia is facing an energy supply crisis – we have some of the most abundant energy resources for our size of population in the world. But as JoNova pointed out a few weeks ago, in just a few short years, Australia went from having some of the cheapest energy in the world to the most expensive.”

“This energy price and reliability disaster could easily have been America’s story. But thanks to President Trump, the USA is turning away from economically catastrophic renewables, and re-embracing reliable energy and economic growth,”Watts Up With That reported. Except for California, and thanks to Jerry Brown, the Democrat Party, and eight Republicans. Is blackouts what they want for our state? California’s natural gas shale formation is one of the largest in the world, and could provide enough reliable energy for California and beyond. While California is a pioneer in renewable energy, it is still unreliable and unproven, while natural gas is proven and reliable.

Australia’s energy price and reliability disaster will inevitably be California’s problem, and very soon. California depends on natural gas-driven turbines and hydroelectric generators to provide just 38 percent of its oil needs. The state imports 12 percent of its oil from Alaska, and another 50 percent from foreign nations, relying heavily on Canada, Watts Up With That reported.

So why are California’s utilities warning of potential rolling blackouts again?

President Trump is turning away from unproven renewables which have never had cost-benefits analyses performed, and he’s re-embracing reliable energy and economic growth, while Gov. Jerry Brown is leading California right toward blackouts. And eight California Republicans have helped him.

Apparently the more than 9,000 California companies which moved their headquarters or diverted projects to out-of-state locations in the last seven years because of California’s “hostile business environment” is not the “environment” Jerry Brown is interested in. Slapping businesses, property owners and taxpayers with additional costs and regulations imposed by CARB bureaucrats and illegal aliens’ healthcare costs is.

And it is notable that the inconsistencies of California Gov. Jerry Brown’s climate change policies, together with his immigration policies, are formidable and deliberately deceptive — one policy is driving taxpayers and businesses out of the state, and the other is driving droves of unskilled, unemployed aliens into the state.

AB 32 was supposed to be based on real climate science that proved that unless dangerous greenhouse gas emissions levels were reduced, the earth’s atmosphere would diminish and we’d all die.

But at the crux of the issue is altered data and science. The data originally produced by the Intergovernmental Panel on Climate Change scientists in the 1990’s were altered by government bureaucrats in order to create a crisis, as well as a demand. And yet it appears Chad Mayes was perhaps bribed or extorted into supporting the cap and trade extension, and convinced he needed to provide additional Republican votes so three Democrats didn’t have to vote on it.

That is not leadership. Let’s hope a real leader arises from the ashes.