Jerry Brown Building His Empire Right Under Our Noses

As California Governor Jerry Brown burnishes his climate change credentials on his crusade to Rome for talks at the Vatican, his adoring California media are ignoring what he is really doing. 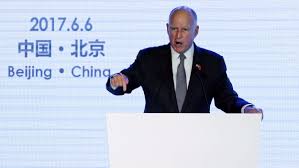 “Absent a seat at the negotiating table, Brown has a role organizing state and local officials from around the world who are increasingly seeking to craft their own climate deals, independent of what their nations’ leaders do,” CalMatters wrote.

Brown has conflated the Trump administration’s disinterest in pushing faux climate change policies with a lack of leadership.

“Brown struck an urgent tone about the threat of a warming world and welcomed the Trump administration to join his ‘crusade,’ CalMatters reported.

Brown’s latest ploy is another in a long line of maneuvers to set California apart from the rest of the country on climate change policy, and is an end-run at Trump, who has enacted environmental policy roll backs at the Environmental Protections Agency.

Brown is applying for his next job

In June, after President Donald Trump announced the United States would leave the Paris Climate Accord, Brown tried to one-up the President. “’I’m on the side of the angels,’ the former Jesuit seminarian said in an interview before flying on Friday to China, where he will rally support for his climate policies next week,” Politico reported. “I’m going to do everything I can, and people are going to join with me.”

“Climate change is California Gov. Jerry Brown’s “crusade,” his jihad, his holy war. Yet Gov. Brown’s climate change and drought policy is flooded with a manic madness – never has his manic obsession with climate change been more evident,” I wrote nearly one year ago in January 2017. 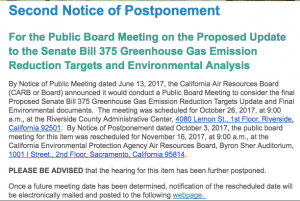 California’s dictatorial Air Resources Board has cancelled two Public Board Meetings on the “Proposed Update to the Senate Bill 375 Greenhouse Gas Emission Reduction Targets and Environmental Analysis.” Hmmm. I wonder what they don’t want the public to see….

California’s go-it-alone venture into regional carbon markets has been a disaster, despite the grandiose promises otherwise. The ARB’s auction of carbon credits have brought in very little of the revenues promised. Future auctions are also expected to fall short, largely because the creators of this false commodity don’t understand economics or the free market: there is a glut of carbon credit allowances, as well as legality issues plaguing the cap and trade scheme.

Yet, cap and trade is really leading to economic collapse instead of reducing CO2, Alessandro Bruno wrote in the Lombardi Letter, an investment research organization. “Government enforcers are fully aware that any business whatsoever that uses carbon-based energy to manufacture, create, or transport goods and services will shift their increased expenses to consumers. They will simply charge more. Cap-and-trade is an unfair imposition with severe consequences. Its inherent injustice contains the seeds of an economic collapse.”

Jerry Brown is the elected Governor of only one state within the 50 United States, not the Sovereign of The People’s Republic of California.

Gov. Brown and fellow state legislative Democrats have operated a sort of shadow government in California when it comes to climate change laws and policy. Yet he has illegally entered into treaties with other states and countries, as I reported in Frontpage Mag:

In October 2013, Gov. Brown, together with the Governors of Oregon and Washington and the British Columbia Premier, signed the Pacific Coast Action Plan on Climate and Energy, “to align climate change policies and promote clean energy.” The Pacific Coast Collaborative links with the West Coast Infrastructure Exchange (WCX), a compact between California, Oregon, Washington and British Columbia, formed in 2013 to promote “the type of new thinking necessary to solve the West Coast’s infrastructure crisis.” The WCX was also linked to the Clinton Foundation’s Clinton Global Initiative.

“California isn’t waiting for the rest of the world before it takes action on climate change,” Gov. Brown said in 2013. “Today, California, Oregon, Washington and British Columbia are all joining together to reduce greenhouse gases.”

Ironically, Sovereign Gov. Jerry Brown found himself embroiled in his own scandal in 2014 when he was caught directing state oil and gas regulators to research, map and report back oil drilling and mining potential at the Brown family’s private property in Colusa County, in Northern California.

Brown traveled to China to meet with the Communist dictator President Xi Jinping in June, in spite of President Donald Trump’s withdrawal from theParis Climate treaty, signaling his fidelity to the unratified and dubious Climate treaty. Brown should have been investigated for colluding with a known foreign enemy upon his return to the United States. It is unconstitutional for a state to supplant federal powers and act on its own when dealing with other nations.

“California will resist this misguided and insane course of action,” Brown ranted in a statement after President Trump’s announcement to withdraw from the Paris Climate Change accord. “Trump is AWOL but California is on the field, ready for battle.”

How low will Brown go to consumate his legacy before he leaves office in 2018? Most Californians say they are relieved that his term is almost up. But Brown still has a final year to kill the Golden State in order to leverage himself and ratify his world stage prominence. Jerry is building his empire right under our noses, similar to other despots who do not care for the value of life as much as they do achieving their selfish motives of domination, power, and immortality — at the great expense of the people of his own state.

Gov. Brown, de Leon, and other California officials will attend events at the European Parliament and meetings with officials in Belgium, Germany and Norway. Next is the climate conference in Bonn,  Nov. 6-17.