I’m just a Navy mom of a United States Naval Academy graduate who is currently a Navy special ops officer, and has had two long Middle East deployments. I wasn’t going to weigh in on the liberal California councilman and public school teacher who told his students “military Are ‘dumbsh*ts” and “lowest of our low.” That is, until I read that the school district officials of Gregory Salcido, El Rancho High School history teacher and a current member of the Pico Rivera City Council, were covering for him, even after he said when speaking about our military, “They’re the frickin’ lowest of our low,” in one of three videos that surfaced last week. 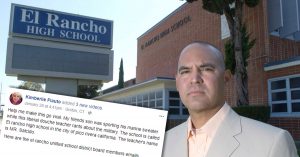 My son’s USNA education was a scholarship, valued in 2007 at $300,000. Around 1,000 freshly minted plebe midshipmen receive this scholarship every year by The United States Naval Academy. The USNA’s ranking by U.S. News and World Report is #1 for the Top Public School, and # 2 by Forbes. Additionally, the United States Naval Academy’s ranking in the 2018 edition of Best Colleges is National Liberal Arts Colleges 21.

I venture to say my son received a far superior education than the ignorant teacher/councilman who made these vile remarks about American service men and women:

My disgust aside, let’s hear from others who are similarly outraged.

“I’d like to see Mr. Salcido loaded up with 160 lbs of gear, operating in 118 degree sandstorms during the summertime, below zero temperatures in the wintertime, searching out terrorists who hide behind women and children,” Melanie Morgan said on Facebook. (Morgan, a tireless activist in support of our men and women in uniform, and chairman of Move America Forward, sends scores of boxes of supplies to American troops overseas), added, “It doesn’t take a rocket scientist to figure out this guy is an as*hole who doesn’t deserve the protections paid for in our country with the lives of the very same men and women he mocks. What terrifies me is that he is in a position to pass his poison along to our future generations.”

And this from Larry Greenfield:

I publicly challenge Mr. Gregory Salcido to a public debate on contemporary political issues in front of his students in California, whom he abused with his rant. These students include children of active duty and veterans of the U.S. Armed Forces.

Perhaps he will learn that members of the military include (ret.) reservists like myself, with advanced degrees from UC Berkeley and the Georgetown Law Center, and a fellowship at a think tank. “The lowest of the low intellectually serve in the military?” Really? Ever look at the academic resumes and life experience of active duty and retired men and women senior military, officers and regular enlisted, as well?

I demand the firing of Gregory Salcido. WHO IS TEACHING AMERICA’S CHILDREN? Apparently the lowest of the low, indeed.

In one of the videos, Salcido said the American military is terrible because members are fighting terrorists in the Middle East but didn’t win in Vietnam. Gregory Salcido, said the U.S. only won World War II, because “we had a freakin’ b**chin’ bomb.” This guy teaches kids history.

What concerns me is that Salcido is certainly not alone in his partisan political views, and openly shares them with students, rather than teaching history.

My son attended public high school and dealt every year with acutely politically partisan teachers,  as well as some outstanding teachers. However, he had to study, analyze and argue his positions with the partisans, and often received lower grades because he dared to question these one-sided authoritarians.

“Such is life?” some say. Perhaps. However, at the annual ceremony his high school hosted to honor all college scholarship recipients, the teachers in attendance mocked and chided him for his military academy scholarship. And at his Eagle Scout Court of honor the week before, his scout master also mocked and chided his scholarship and choice to attend the Naval Academy. Remember when the Boy Scouts honored our military?

“This is not the first time Salcido, 49, has come under scrutiny for behavior in the classroom.

In May 2012, he was put on paid administrative leave after the Sheriff’s Department received a complaint that he struck a student.

In July 2010, a parent complained that Salcido had threatened his daughter, made inappropriate comments to his summer school class about race and insulted other students and parents, which Salcido denied.

He was suspended until the following fall’s first day of class.”

Why is this teacher still in the classroom? Who thinks his behavior is okay? Why do parents allow these lousy teachers to treat students and their families with this disrespect? And how do parents address partisan teachers who ignore the subject matter of their classes in favor of their personal biases?

Parents want and deserve answers to these questions — and are tired of the teachers unions protecting these brutes.