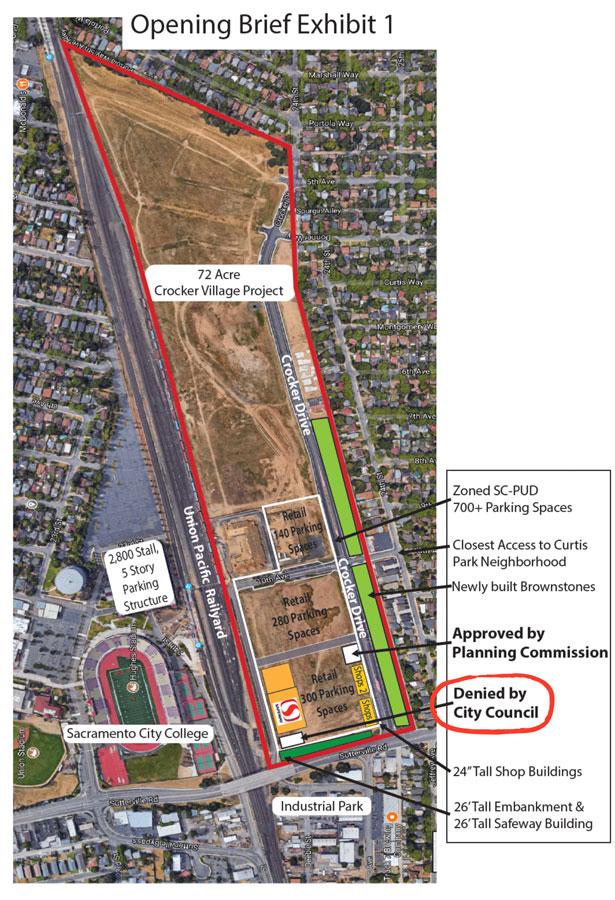 On a drive throughout the City of Sacramento you’ll see everything from beautiful high-end neighborhoods, to impoverished neighborhoods, and everything in between – all now mixed with great poverty, as well as the lawless homeless population.

Now imagine if the City of Sacramento had a spare $40 million to address the homeless problem, as well as the many related issues?

Imagine if residents in Oak Park, one of the city’s most economically depressed neighborhoods, had jobs that paid more than $18 million in salary and benefits in just the past few years. The ripple effect of these jobs would inject a $90+ million stimulus to the Oak Park community.

This isn’t some crazy dream but it could already have occurred without spending any taxpayer-funded “government money” if the Sacramento City Council would only have upheld the Sacramento Planning and Design Commission’s approval of the permit to build a gas station in Crocker Village in November of 2015, says Paul Petrovich, the developer of Crocker Village.

As I wrote last week, Paul Petrovich has been working since 2003 and invested upwards of $100 million in his lovely Crocker Village development project in an infill development within the City of Sacramento. He has been building the 72-acre infill project on the unsightly abandoned Union Pacific rail yard located behind Sacramento City College, between the beautiful old established neighborhoods of Land Park and Curtis Park. The property links to Sacramento City College and a light-rail station by a new pedestrian bridge that arches over the train tracks. Petrovich originally invested $50 million to clean up the toxic defunct rail yard. The commercial building plans include a Safeway store and fueling station, as well as many retail stores. But that gas station is making Curtis Park residents’ heads explode; they claim a gas station presents cancer risks. However, the proposed gas station is 600 feet from the nearest house, making it the safest gas station in the region.

This tangled web is not just about a gas station; it’s about politics, politicians, abuse of power, dubious non-profits as fronts for “charity,” conflicts of interest, behest payments, and local taxpayers, who are footing the city’s substantial legal bill to fight Petrovich and his attempt to beautify an old toxic rail yard.

The Sacramento City Planning Commission granted Petrovich a conditional use permit for the gas station, to go along with the Safeway supermarket. The Sierra Curtis Neighborhood Association, which opposed the gas station, appealed to the City Council.
Led by Councilman Jay Schenirer in 2015, the council voted 7-2 to deny the permit. So Petrovich sued, and recently won his case against the City of Sacramento. Superior Court Judge Michael Kenny ruled in January that the Sacramento City Council’s vote denying construction of a gas station was unlawful and that Councilman Schenirer was illegally “coaching” opponents of the gas station through the political process. The Judge found Schenirer specifically coached the president of the contentious Sierra Curtis Park Neighborhood Association on how and what to say in its opposition to Petrovich’s development.

“The Court cannot ignore evidence that, in the days preceding the hearing, Councilmember Schenirer was no longer a neutral, unbiased decisionmaker,” Superior Court Judge Michael Kenny wrote in his ruling. “Accordingly, Councilmember Schenirer should have recused himself from the vote on the project’s (permit), and his failure to do so was a failure to proceed in the manner required by law.”

But the City Council ignored the Judge’s warning, and voted 6-0 in January to appeal the court’s ruling. In an op ed to the Sacramento Bee, Petrovich expressed dismay at the Council’s appeal decision: “The Jan. 3 order was clear: The council was to give me a fair hearing within 60 days and Schenirer would recuse himself because he broke the law.”

“The Council’s vote to appeal the judge’s decision should outrage every taxpayer in this city,” Petrovich said. “The order was very clear that the city was to simply give me a fair hearing within 60 days and recuse Councilman Schenirer because he illegally fixed the outcome of the council’s vote on the fueling station permit. Yet, council members are willing to waste even more precious taxpayer money on top of the $600,000 they have already spent to try and protect the reputation of one of their own.”

Sacramento residents should be outraged by the corruption of some of the members of the Sacramento City Council and their eagerness to waste taxpayer money for the sole benefit of a few Curtis Park residents, while denying the rights and needs of the entire city, as Petrovich said.

If approved, Petrovich’s Crocker Village infill project comes with 200 much needed, well-paying union jobs for nearby Oak Park, totaling at least $7.5 million in salaries and benefits per year. Safeway even committed to hire from the most poverty stricken area of the greater Sacramento region, which is Oak Park. This poverty stricken community of 22,000 people would see these benefits without any public investment. However, these 22,000 people are in Sacramento City Councilman Jay Schenirer’s district. Schenirer, who voted to oppose the gas station in the Crocker Village development, is putting the entire commercial project at risk. Schenirer is known for largely ignoring the economically strapped Oak Park residents in favor of the affluent residents in his own neighborhood of Curtis Park.

Schenirer’s personal animus and bias towards the developer was acknowledged and actually ruled on by Judge Kenny, who ordered Schenirer to recuse himself from all future issues on the Crocker Village development.

Since the project was dubiously delayed by Schenirer and the City Council, Oak Park residents have lost what could have been $20 million in salaries and benefits, along with the multiplier effect of almost $90 million to that community. The city is also losing $10,000 a day or $3,650,000 per year in sales and property tax revenue, 900 permanent jobs and $32 million in impact fees from the site, according to Petrovich.

Councilman Jay Schenirer, who is up for re-election, has ignored the economic needs of the 22,000 constituents in Oak Park who could be employed by the Safeway store slated to go into Petrovich’s development, along with the gas station, and other retail outlets.

Schenirer broke the law and abused the power of his elected office. As Petrovich says, “The time has come for Mayor Darrel Steinberg to end this conflict. If I am willing to go back in front of a biased council with six of the seven ‘no’ votes still participating, what are they afraid of?”

Next: The tangled web of politics, politicians, and non-profits, and the incestuousness of local political organizations.