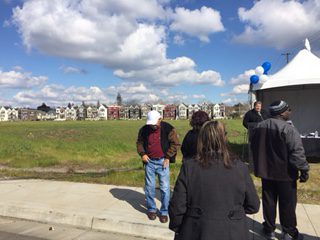 Long-time California developer Paul Petrovich has been working since 2003, and invested upwards of $100 million in his Crocker Village development project  — an infill development on an old abandoned Union Pacific rail yard. The plans include the already built handsome three-story Brownstone homes, affordable housing, senior housing, and upcoming single-family homes; the commercial building plans include many retail outlets with a Safeway store as the anchor, and a Safeway fueling station. These retail shops and the Safeway would provide hundreds of full-time jobs to the nearby economically depressed neighborhood of Oak Park, of which Safeway has promised to do the hiring.

Petrovich’s 72-acre infill project on the unsightly abandoned Union Pacific rail yard behind Sacramento City College, is located between two old established neighborhoods within the City of Sacramento. Many long-time residents of the area are happy to see something attractive finally being built in the old rail yard however, a few loud activists in the nearby Curtis Park neighborhood, located behind Petrovich’s Crocker Village, ginned up opposition to the gas station — claiming gas stations cause cancer — and say the location will increase traffic hazards in their neighborhood. 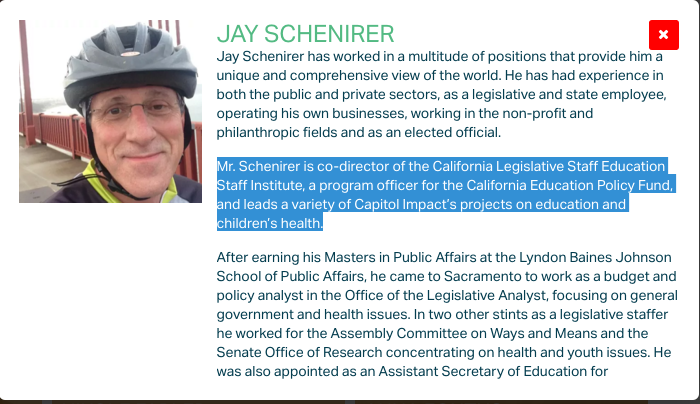 Sacramento has a significant housing shortage, which has caused rents to skyrocket and home sales prices to increase. But the housing shortage apparently hasn’t hurt the political left in Sacramento (who already own their homes), who are determined to halt the much needed housing and retail jobs.

Oak Park and Crocker Village residents held a rally Sunday in support of Petrovich’s proposed Safeway store and gas station project, which had received approval by the Sacramento planning commission, but was overturned by the Sacramento City Council due to “traffic and environmental concerns.” But what many believe is that Curtis Park residents do not want residents from Oak Park or other nearby neighborhoods traveling into or working in their neighborhood. Their exposed emails certainly confirm this. 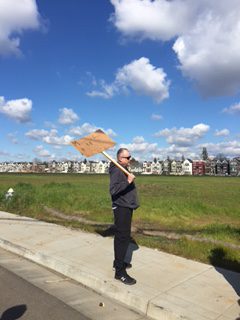 One protestor at the rally in support of the Safeway and gas station. You can see how far away from homes the gas station would be.

The tail is wagging the dog in Sacramento, CA.

We’ve watched this same scenario for decades, leading to California’s massive housing crisis. 75 percent of Southern Californians can’t afford to buy a home, according to the state realtors association. And 16 of the 25 least affordable communities in the U.S. are in California, according to 24/7 Wall Street.

Sacramento’s Crocker Village problem rests with City Councilman Jay Schenirer, who lives in the Curtis Park neighborhood and is the former president of the Sierra Curtis Neighborhood Association – the activists trying to halt the Safeway gas station.

Schenirer needs to clean up his own house before he works to prevent a developer from building other people’s much-needed homes. In addition to coaching the opposition and colluding with city officials and council members, Jay Schenirer has his hands in education non-profits attached to city government, which receive government grants without much accountability for results. Schenirer receives significant consulting fees from Capitol Impact (see graphic), 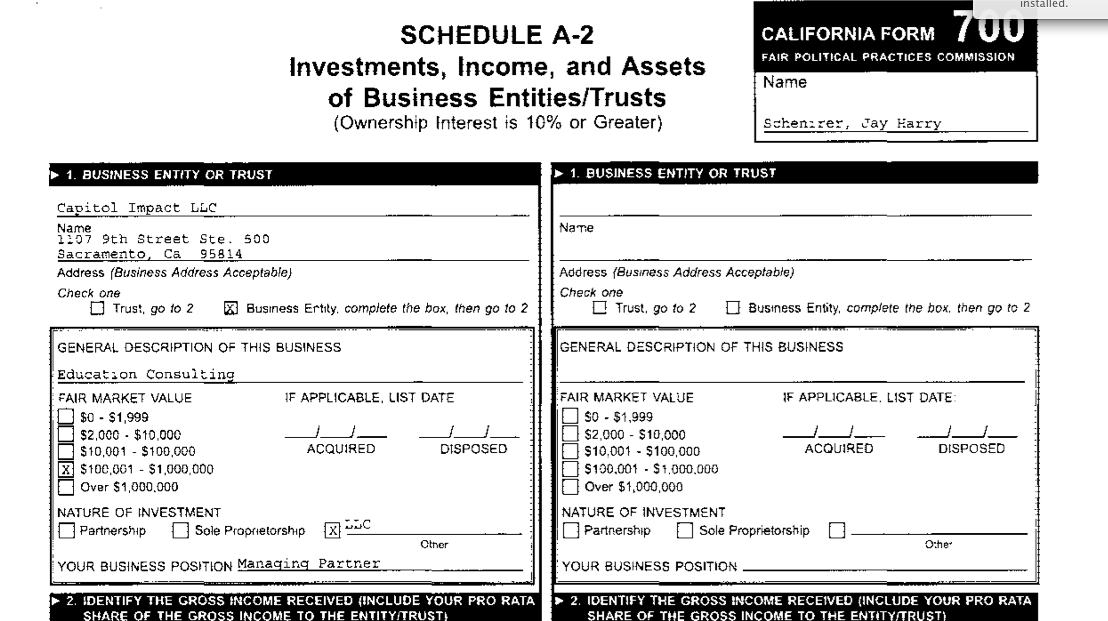 which is the parent non-profit of many others and shares staff and board members with Linked Learning Alliance, Launchpath, CORE Districts, and others. Schenirer’s Capitol Impact bio reports: “Mr. Schenirer is co-director of the California Legislative Staff Education Staff Institute, a program officer for the California Education Policy Fund, and leads a variety of Capitol Impact’s projects on education and children’s health.” So what’s an education consultant doing meddling in a housing and retail development? More on that later.

After the City Council overturned the Sacramento Planning Commission conditional approval of the Safeway gas station, Paul Petrovich sued. And he won. A Superior Court Judge found that City Councilman Jay Schenirer illegally fixed the outcome of the council’s vote on the building permit request for the fueling station. The Judge ruled that the Sacramento City Council’s vote denying construction of the gas station was unlawful and that Councilman Jay Schenirer was illegally “coaching” opponents of the gas station through the political process. The Judge found Schenirer specifically coached the president of the contentious Sierra Curtis Park Neighborhood Association on how and what to say in its opposition to Petrovich’s development.

Schenirer was ordered to recuse and disqualify himself from any future proceedings on the Safeway gas station project. However, the City Council voted to appeal the judge’s decision, threatening to drag the case out for three more years, rather than conducting another hearing on the gas station permit as the judge ordered.

As Petrovich has repeatedly pointed out, Schenirer’s backroom political deal with the Sacramento City Council to reverse the Planning Commission’s approval and stop the fuel station was not only illegal, but it has cost the city nearly $40 million in lost tax revenues by preventing completion of the City’s second largest infill project, and it has denied Oak Park residents the 200 full-time union jobs with Safeway, for the sole benefit of a few affluent Curtis Park residents. “The judge’s January 3rd order was clear – the City Council was to hold a fair hearing on the gas station request within 60 days and Councilman Schenirer would recuse himself because he broke the law and violated civil rights to fair due process,” jobsforOakPark.com reports. Rather than agreeing to hold a new hearing, the Sacramento City Council voted 6-0 to appeal the judge’s ruling.

The collusion in this case runs deeply. SACOG, the Sacramento Area Council of Governments, had a big hand in stopping the gas station permit. Mike McKeever, the former Chief Executive of SACOG, insisted to the Sacramento City Council that allowing the Safeway gas station would jeopardize future federal funds to the region. The current Chief Executive of SACOG, Kirk Trost, continued this line of thinking at the city council hearing.

SACOG is made up of city council representatives from 22 area cities and six counties, and serves as a regional transportation planning entity, distributing federal transportation dollars to cities and counties. The apparent current SACOG interest in federal funding is the $200 million downtown Sacramento trolley, which area voters already voted down once. SACOG and the City of Sacramento weren’t happy with the vote, so they schemed to put it on the ballot again, but this time by cherry picking voters and gerrymandering the district. The new ballots went only to commercial property owners along the planned trolley route, instead of going to all property owners in the area as the previous ballot had. City officials were warned when Howard Jarvis Taxpayers Association President Jon Coupal sent a letter to Sacramento city officials prior to the dubious vote that any Mello-Roos Community Facilities District tax passed with less than a unanimous vote could be challenged in court by any landowner who voted against the tax. 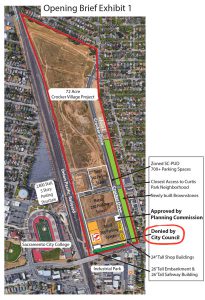 Additionally, former SACOG chief Mike McKeever and his wife Nancy McKeever reside in Curtis Park and are close friends with Schenirer. During the discovery phase of Petrovich’s lawsuit against the city, emails and text messages were revealed between many of the Curtis Park activists, SACOG’s McKeever and his wife Nancy, Jay Schenirer, and city council staff, providing and coordinating strategy, exact opposition language and talking points, as well as discussing meetings in their private homes to coordinate. One example was an email from Nancy McKeever saying, “Our goal on Wed night is to show the Councilman that the neighborhood does not want a gas station so that he will work to get the Council to vote no should it come to that.” (emphasis original.)

As for the dangerous traffic and environmental concerns, updated reports show the traffic will still be below the estimates of the 2010 Environmental Impact Report, and the health-risk analysis was cleared by the Sacramento Metropolitan Air Quality Management District. With every hurdle the Petrovich project cleared, the loud activist opposition in Curtis Park came back with new complaints – including the odd threat by SACOG of a loss of future federal transportation funding.

As I noted in a 2010 article about Petrovich’s development, “Ironically, when the need for multi-family low-cost housing came up, the opponents of the project insisted that the low-cost housing be removed from the original prominent locations nearest Curtis Park, and placed instead, in the rear of the development by the railroad tracks, demonstrating that their involvement is not for the greater good, but instead the Not-In-My-Backyard attitude – living in low cost housing and riding the bus is good for other people.”

Every taxpayer in the city of Sacramento should be outraged that the City Council has chosen to appeal the judge’s decision. The City lost badly when the judge ruled that Councilman Schenirer illegally fixed the outcome of the council’s vote on the building permit request for the fueling station by illegally “coaching” opponents of the gas station through the political process.  Yet, council members are willing to waste nearly $1.8 million of taxpayer money to protect the reputation of one of their own. And the one they are protecting – Jay Schenirer – clearly has boundary issues.