This is Part lll of Prevailing Wage Scams Between State DIR and Unions. Part ll is HERE. Part i is HERE.

In what world does a janitor get paid $48.50? In the world of California politics, driven by corrupt labor unions and greedy state agencies. 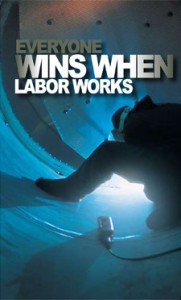 Janitorial company owner Jeff Baron is in trouble with the state of California because large general contractors who hire him as a subcontractor charge the state, the union prevailing wage rate of $48.50 per hour in their bids on public works projects, but then pay him the going rate of $10 to $15 per hour. Taxpayers are on the hook for paying $48.50 per hour for janitors on public works projects, while subcontractors like Baron’s janitorial clean up company, are paid less, and general contractors pocket the difference.

The Riverside District Attorney has had criminal charges filed against Baron for five years. They just announced they plan to bring his case to trial within weeks. It’s easier to go after small subcontractors who run thriving businesses, but likely don’t make political campaign contributions as do large contracting firms.

But as the layers are peeled back, could a dirty scheme be unfolding involving the Department of Industrial Relations, DIR contractor the Center for Contract Compliance, and the Riverside District Attorney? It’s a case of everyone-but-the-janitor-gets-paid – because he’s doing all of the paying.

There is no classification under the labor code that the Department of Industrial Relations that is written to apply to janitorial work that labor compliance companies will accept on public works jobs. So Baron’s final construction clean up janitors are classified under ‘rough clean up’ Group 1 General Labor, which is not the work that they perform. Baron’s crews do the final clean up on construction projects – mopping, window washing, wiping dust of walls, and the like, to get the building ready for occupancy.

And because the DIR refuses to address this oversight on the labor code, and continues to lump final cleanup janitorial work under the Group 1 General Labor classification, the Laborers Union Local 1184 of Riverside, jumped on the opportunity to squeeze out the SEIU, which adheres to a normal pay scale for janitors. This trap creates a great deal of business for state Labor Compliance Programs, like James Reed’s Center for Contract Compliance, which filed charges against Baron with the DIR for paying his janitors SEIU wages of $9.00 – $15.00, instead of Laborers Union wages of $48.50 per hour.

Former Assemblyman Curt Hagman, R-Chino Hills, introduced legislation in 2013 to address this problem, but only after trying to work directly with the Department of Industrial Relations himself to no avail. The DIR would not discuss the prevailing wage classification problem, and arrogantly continually referred Hagman to the DIR website.

First and foremost on Jeff Baron’s mind these days is this horrid case. He says he cannot fathom how trying to do the right thing got him so upside down and in trouble.

But also on his mind is something far more important: Since I last saw Jeff Baron in 2013, he has had total renal failure and is on kidney dialysis three times a week, for 5-6 hours at a time.

Yet he wants justice, and the truth. “I want my day in court,” Baron said. “I’ve been providing them every document they’ve asked for. I’ve got it all.” But now he is too ill to even bathe and dress himself. He’s in a wheelchair. He has an emergency catheter in his chest. “This isn’t how it should be in America,” Baron said. “I’m dying because of this nightmare. And if they send me to jail, I know I won’t get the specialized medical care I need, and will die.”

Baron is right to question how this can happen in America? The state of California, in cahoots with labor, has ruined Jeff Baron’s once-thriving small business, charged him with trumped-up crimes, and is threatening to send him to jail… all because he correctly questioned why the state was enforcing the absurd wage of $45.00 per hour for a janitor to mop the floor at a construction site.