As Gov. Jerry Brown prepares to sign another climate change agreement with “government leaders from around the world,” as his office announced, remember the recent agreement Brown got into with the scandalized Oregon Gov. Kitzhaber. “In October 2013, California Gov. Jerry Brown, together with the Governors of Oregon and Washington and the British Columbia Premier, signed the Pacific Coast Action Plan on Climate and Energy, “to align climate change policies and promote clean energy,’” I wrote in February.

The Pacific Coast Collaborative links with the West Coast Infrastructure Exchange (WCX), a compact between California, Oregon, Washington and British Columbia, formed  in 2013 to promote “the type of new thinking necessary to solve the West Coast’s infrastructure crisis.” And the WCX is linked to the Clinton Foundation’s Clinton Global Initiative. And the entire scheme was intricately involved with hedge fund billionaire Tom Steyer. Steyer has said he’s willing to “spend what it takes” to implement climate change policies that are already driving up California’s gas prices –by some estimates of at least 15 cents a gallon. Steyer, a well-known environmental extremist, even wants to penalize people who contribute to global warming.

While the liberal mainstream media twists itself into a pretzel to avoid reporting much on actual news, life in California under Democrat Party rule is a real downer. California’s Governor Jerry Brown is a Democrat. All of the state’s Constitutional officers are Democrats. And the California Legislature is dominated by Democrats. The rule of law has been largely abandoned by the state’s Democrats. Consequently, the ‘anything goes’ attitude in the Legislature — legal or not — is how they roll. 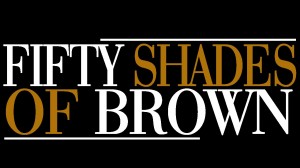 California, once known as The Golden State, has been tarnished; we are struggling under a dirty shade of Brown.

While I’d rather talk about the 50 shades of blond I am more familiar with, here is a rundown of life in California under the 50 Shades of Brown:

Feel free to add to the 50 Shades of Brown in the comments below. Some in the state say Jerry Brown came back to the governor’s office to finish the destruction he started back in the 1970’s. There is so much more. I’ve barely scratched the surface.