Tuesday September 18, 2018 was the day in which the Gerawan Farming workers’ ballots from 2013 were finally counted after being impounded and locked up for five years by the California Agricultural Labor Relations Board. Overwhelmingly the workers elected to decertify the United Farm Workers labor union from their workplace: 1,098 for “No Union,” and 197 for the UFW. 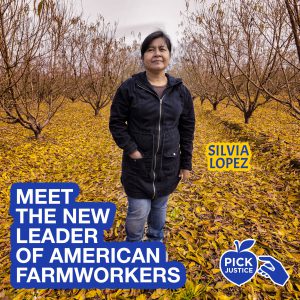 Now that the ALRB has finally certified the votes, putting an end to their illegal collusion with the UFW to force Gerawan Farming’s thousands of workers into a labor union, it’s time to forever shut down the ALRB.

I’ve been covering the Gerawan workers fight against the UFW since 2012. The UFW won an election to represent Gerawan Farming Company’s workers 26 years ago. But after only one bargaining session, the union disappeared and wasn’t heard from for more than 22 years. However, in October 2012, the union reappeared to impose a contract on Gerawan Farming and its employees — without a vote of the workers.

The three board members of the ALRB, appointed by Gov. Jerry Brown, their attorneys and administrative law judge, spent nearly $20 million of California taxpayers dollars, to suppress the votes of 2,500 Latino immigrant farm workers who did not want the labor union in their workplace. This is what corruption is.

“When it ordered the ALRB to count the votes, the Court of Appeal made clear that democracy is threatened when a government agency entrusted to protect the right to vote conceals and suppresses the results of that vote,” the Gerawan family said in a statement after the decision Thursday. “The court called upon the Legislature to ensure that farmworkers won’t have to wait five years to have their votes counted. We join in that call to legislative action.”

One way to accomplish this is to shut down the corrupted ag labor board. 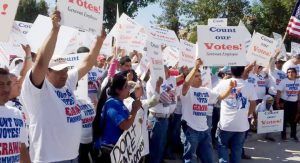 “The California Agricultural Labor Relations Board was created in 1975 to ensure peace in the fields of California by guaranteeing justice for all agricultural workers and stability in agricultural labor relations,” the ALRB states. Yet at every turn since 2012, the ALRB colluded with UFW labor union leaders and thwarted the efforts of the farm workers to vote to decertify the union. Specifically, the three board members of the ALRB, at any given point since 2012, have violated their own agency mission, manipulated, sided with the UFW labor union, and conspired to suppress the will and votes of the workers.

In May, an appellate court ordered California officials to count the ballots the Gerawan farm workers cast in 2013 to decertify the United Farm Workers Union from representing them. Those ballots had been locked up, uncounted, since the 2013 decertification election on orders of the California Agricultural Labor Relations Board.

An ALRB administrative law judge even ordered the ballots destroyed, but the workers’ prevailed in court to stop the destruction of their ballots. Acting as an arm of the union, the ALRB did this not to protect the farm workers – as is the ARLB mission – but sided with the flailing United Farm Workers labor union.

The California Supreme Court heard the Gerawan case last fall on whether the state’s attempting to force mandatory agricultural labor union contracts violates the constitutional safeguard of equal protection. Gerawan Farming is one of the largest agriculture employers in the state. Surprising no one, on Nov. 27, the California Supreme Court upheld the dubious Mandatory Mediation and Conciliation law against Gerawan Farming. (I wrote about it HERE)

The Mandatory Mediation and Conciliation law allows state mediators to force union contracts on workers through binding mediation – in essence, it shoves a contract down the throats of workers, without their consent. In the 48-page decision, the California Supreme Court Justices said, “We conclude that the MMC statute neither violates equal protection nor unconstitutionally delegates legislative power.”

Gerawan petitioned the United States Supreme Court for review of California’s Mandatory Mediation and Conciliation law, which appears to collide with the First Amendment and due process principles.

The Gerawan Framing case presents the question whether a state may impose contract terms on one private employer and its employees against their will by means of non-consensual arbitration.

The need for U.S. Supreme Court intervention is particularly heightened in this case. The union that invoked the MMC statute against Gerawan Farming had “disappeared from the scene” for the preceding 26 years, during which time the union made literally no contact with Gerawan or its employees. In late 2012, the union resurfaced and invoked MMC, forcing pay and contracts onto farmworkers and employers without their input or vote, making them second-class workers.

“In response, Gerawan farmworkers petitioned for a secret ballot decertification election. An election was held more than four years ago; the ALRB impounded the ballots, set aside the election, dismissed the petition and, over the objections of Petitioner and thousands of its employees, imposed an MMC contract that requires the farmworkers to pay 3% of their earnings to the union and forces Petitioner to fire employees who refuse to comply. Even worse, the contract prevents the employees from seeking to rid themselves of the union for years to come: As interpreted by the California Supreme Court, California labor law prohibits farmworker employees from seeking to decertify a union until the final year of a collective bargaining agreement, and the MMC decree is treated under California law as if it were a consensual collective bargaining agreement.”

This is corruption: conspiracy, collusion and treasonous behavior betraying the workers.

Jesse Rojas, the spokesman for Pick Justice, was involved every step of the way and explained: “Pick Justice was started because of the courage, strength and determination of thousands of farmworkers who simply wanted the right to choose and to be treated equally like every other worker in the state and country. We are thankful that the ALRB finally did the right thing after 5 years of suppressing workers’ rights. Today is a historic and huge victory for the Gerawan farmworkers. Pick Justice is just getting started and will continue to advocate for what is right.”

“I am speechless and beyond excited and happy because justice was finally done,” said Gerawan worker Silvia Lopez, who started and led the effort to decertify the UFW.

In the meantime, Californians need to demand the shut down of the corrupt Agricultural Labor Relations board.